Star back-rower Josh Papalii endured a slow first half of the year by his lofty standard due to a niggling ankle injury and hangover from his successful World Cup campaign, however by season’s end he was back to his damaging best.

Papalii established himself among the game’s elite back-rowers in 2013 by gaining representative selection for Queensland in their State of Origin success, a spot in the Prime Ministers XIII as well as a place in the Australian Kangaroos for the World Cup.

In addition to this, Papalii was also a consistently high performer for the Raiders in 21 appearances.

Due to the enormity of his season, Papalii was granted an extended break and did not undergo a full pre-season.

Despite this, Papalii started the season well in Round 1 against the Cowboys. Playing the entire 80 minutes, Papalii scored an outstanding individual try, registered one line break and five tackles breaks, ran for 87 metres and compiled 33 crunching tackles.

Unfortunately, the 22 year old injured his ankle in the 49th minute of the win over the Knights the following week.

Papalii subsequently missed the next three matches however he made a return in Round 6.

The Logan Brothers junior was still hampered by his ankle injury after returning to the field, however he bravely battled on.

Papalii did enough to retain his spot in Queensland’s side for Game 1 of the State of Origin series however after the Maroons lost the match, Papalii was dumped for the remainder of the series.

Knowing that he was down on form and match fitness, Papalii took the proactive step of playing for the Souths Logan Magpies in his week off to recapture his form and regain match fitness.

This step, and extra fitness sessions on the training paddock, saw Papalii finish the year off with several dynamic performances.

Papalii’s improved form over the latter half of the year saw him selected in the Australian squad for the upcoming Four Nation’s tournament.

From this squad, Papalii was selected at prop in the Prime Minister’s XIII for the match against the PNG Kumuls at Kokopo on Sunday October 12.

Papalii’s potent mix of explosive charges, sharp footwork for a big man and ferocious hits in defence makes him such an intimidating proposition for opponents and such an eye catching performer for his own side.

A big play by Papalii can turn the momentum of a match, inspire his team mates and strike fear into the opposition.

Papalii will admit that he was below his best this year due to injury and this was reflected in his statistics. Papalii’s numbers in every facet bar offloads were down on his sensational numbers from 2013.

As such, Papalii will be thoroughly motivated for a stellar season in 2015 for the Raiders, which will aid him in his quest to recapture his Queensland and Australian jerseys. 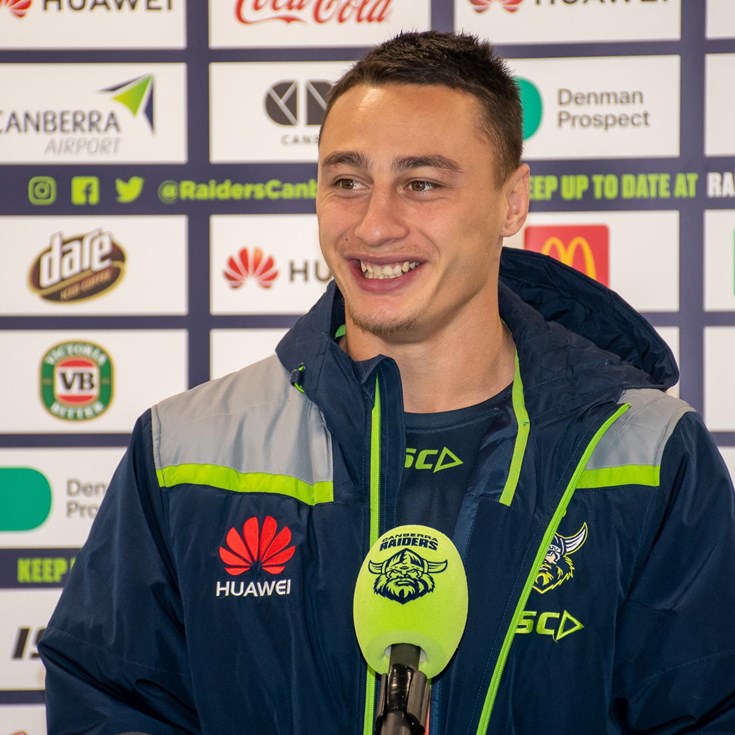