The Canberra Raiders have kicked off their 2015 season in terrific fashion by registering a thrilling 24-20 victory over the Cronulla Sharks in what was an entertaining and fiery encounter at Remondis Stadium.

The Raiders were priced as large outsiders leading into the match however they displayed the kind of self-belief, commitment and passion that would have made the club’s parochial supporter base extremely proud.

They weren’t perfect – no team is in Round 1 – but there were numerous signs on show tonight that would leave Raiders fans highly optimistic about what 2015 should hold in store for the Green Machine.

After his first full pre-season training at fullback, Jack Wighton was simply brilliant in the first half and it was the Indigenous All Stars representative who opened the scoring in the 8th minute after a nicely worked set play with Mitch Cornish and Jarrod Croker, who slotted the conversion with ease.

Four minutes later, Croker kicked a penalty goal to extend the side’s lead out to 8-0.

Cronulla posted their first points of the match soon after when back-rower Anthony Tupou stormed onto an offload from Tinirau Arona. Michael Gordon converted to make the score 8-6.

Wighton then hit back for the Raiders with the try of the match and a resounding portrayal of his envious natural ability.

After fielding a kick, Wighton raced to take the 20 metre restart and they cut through Cronulla’s defensive time and ran the 80 metres to the try line untouched. As you would expect, Croker made no mistake with the conversion from in front of the uprights, which made the score 14-6 at half-time.

After a free-flowing first half, mistakes started to creep into both side’s play in the second stanza. After Wighton lost the ball whilst attempting a quick play-the-ball, the Sharks capitalised with Sosaia Feki crossing in the 46th minute after good ball movement from halves Jeff Robson and Ben Barba. Gordon converted to narrow the deficit to 14-12.

Rapana responded for the Raiders two minutes later with a tremendous put-down after a nicely worked backline movement.

Several mistakes and penalties ensued until Cronulla centre Ricky Leutele crossed in the 54th minute. Gordon missed with his conversion attempt meaning that the Raiders held onto a slender two point lead 18-16.

This did not last for long when Gordon slotted a penalty goal two minutes later to level scores.

With both sides fired up and motivated to get their seasons off to a positive start, tempers started to rise. This emotion erupted between Wighton and Feki and the pair were sin binned for fighting. As Wighton threw the first punch, Cronulla received the penalty and Gordon gave his side the lead 20-18 with 18 minutes remaining on the clock.

Canberra regained the lead three minutes later when Sisa Waqa powered his way over from dummy half to score. Croker converted to make the score 24-20 and that’s the way the match ended after a resolute last 10 minutes of defence from the Green Machine.

Special mention must go to Luke Bateman who handled himself well in what was a tense first initiation to first grade.

There are no major injury concerns for the Raiders however Shaun Fensom was cited for a chicken wing tackle in the first half and Wighton was also put on report for the incident with Feki.v 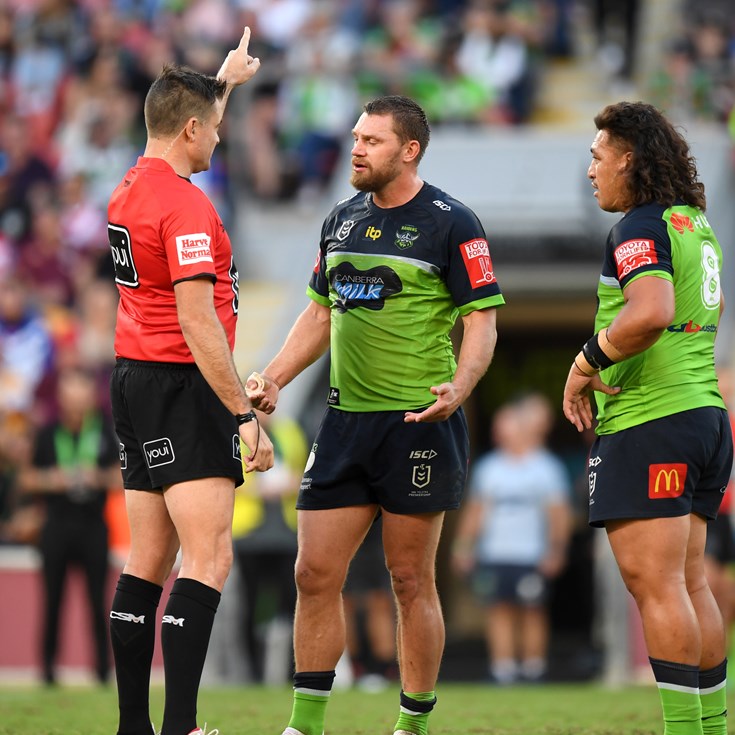