This week’s Raiders Members profile features the Reiher family, who are have held a gold family membership with the club for over 20 years.

Below is a background of the families involvement with the club as provided by the family.

Kevin and Joy Reiher and their sons Sean and Craig, Craig’s wife Nina and grandsons Lachlan and Mitchell are three generations of passionate RAIDERS FAMILY who have been supporters since 1982 and with membership spanning more than 20 years.

The REIHER’s association with Rugby League goes back to the ‘60’s when Kevin played 1st grade with Canberra Workers under Captain Coach Mel Cook (NZ international) and against Don Furner Senior, who was Captain Coach with the Queanbeyan Blues in the former NSW Group 8 Division.

The association was rekindled when the Raiders management, players and staff took Sean under their wing after he suffered a severe brain injury from a motor bike accident in 1990. Special mention must be made of Mal Meninga, Ricky Stuart and David Furner who joined the family for special occasions for Sean both in hospital and other care facilities while they played with the club. 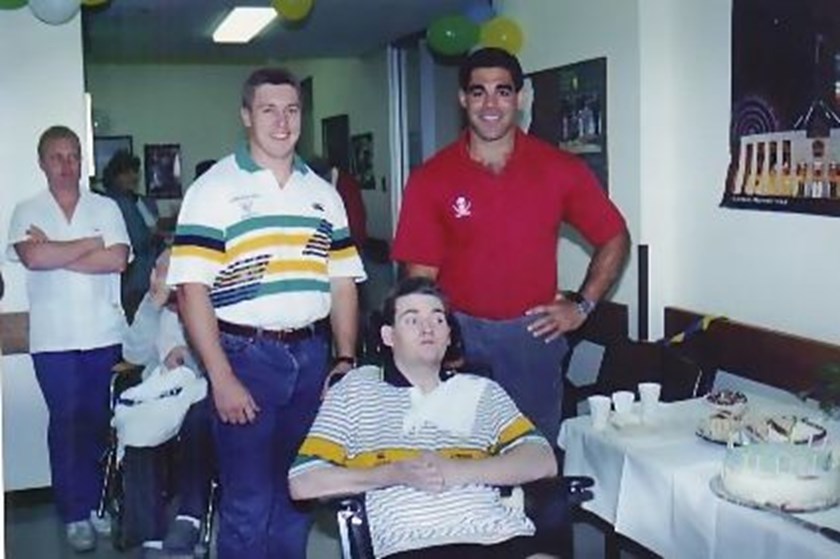 Through the good grace of the Raiders, Sean has rarely missed a home game over the last 22 years, with Kevin and Joy travelling extensively to away games.

Their interest in Rugby League included a Kangaroo Tour of the UK in 2003 with Mal and Chief Harragon (Newcastle Knights) as tour guides. The Reihers acknowledge and thank Raiders management, players and staff for their kindness and support over the years in enabling Sean to have a close association with players past and present who even after moving on, continue to go out of their way to say hello to Sean.

The younger Reihers (Lachlan and Mitchell) attend all home games and love meeting the players, who along with coaches, have enjoyed a bit of sugar (Joy’s lollies) when saying hello to Sean after games. The family looks forward to the Raiders reaching the finals and hopefully a Grand Final win in the coming years.  However, win lose or draw we will be there, we are Raiders Family through and through.

The Canberra Raiders thank the Reihers for their continued support of the club. They are truly Raiders Family.