Jack Wighton inspired the Canberra Raiders to a third consecutive victory with a 30-18 win over the Manly-Warringah Sea Eagles tonight at GIO Stadium.

Junior Paulo made his highly anticipated Raiders debut, starting in the front row with Sia Soliola joining him in the starting line-up.

Josh Papalii and Joseph Tapine filtered back onto the bench, with Paul Vaughan dropping out of the seventeen.

After driving himself home from Origin on Wednesday night, Papalii showed no signs of wear and tear as he cracked the 100-metre barrier and bagged a four-pointer.

Daly Cherry-Evans drew first blood for the visitors in the sixth minute, slicing through a gap in the defence after a spate of early penalties in Manly’s favour. Jamie Lyon made no mistakes in front of the sticks, adding the extras to give his side an early 6-0 lead.

Denied by the Bunker just minutes earlier, Brenko Lee got the hosts on the scoresheet when he found himself on the end of an overlap to score just inside the left-hand sideline. Jarrod Croker nailed the kick, locking up the scores at 6-all after fifteen minutes.

With scores tied, Manly seemed content to negate Man of the Match Wighton’s running game as they continually worked the ball into Canberra’s half before sending it over the touchline on the last tackle.

Canberra worked their way out of their own red zone on the back of exciting new recruit Paulo. The 338th man to don the green jersey had the 9,157-strong crowd in a rapturous applause every time he charged into the Sea Eagles’ defensive line, racking up 56 metres with his first five carries.

Wighton went within a whisker of putting Canberra in the lead when he lost control of the Steeden over the try line with under thirteen minutes remaining in the half.

It looked as though promising Manly winger Tom Trbojevic would rub salt into the wound moments later, but some inspired Canberra defence carried the youngster touch in-goal.

A barnstorming run from backrower Sia Soliola got the Green Machine on the front foot, allowing Canberra to heap the pressure on Manly’s line.

Hodgson’s timing was impeccable, giving his side a much-needed mental boost having enjoyed the lion’s share of possession in the opening stanza.

A scintillating piece of second phase play gifted Elliott Whitehead the first try of the second forty, linking up with Josh Papalii after the Maroons star found himself on the inside of a miraculous Joseph Leilua offload. Croker added the extras to hand Canberra an 18-6 lead.

Canberra snatched their fourth just minutes later as Wighton plucked an Aidan Sezer kick out of the night sky. Croker’s conversion attempt was never in doubt as Canberra took an insurmountable 18-point lead.

Jordan Rapana nearly scored off the next set when he broke through the Manly line on a 60 metre sprint, before Papalii crashed over two plays later. Croker’s unblemished record with the boot continued as the margin stretched to 24.

Manly rake Matt Parcell darted out of dummy half to score virtually untouched, with Dylan Walker’s conversion cutting the deficit to eighteen with nine minutes remaining.

Apisai Koroisau added some further respectability to the score line for the away side as he notched up Manly’s third try with just under seven minutes left on the clock.

Tom Trbojevic looked a certainty to give his side one last chance at an unlikely victory as he strode down the wing inside the final three minutes, before Wighton produced a herculean effort to drive him over the sideline just a metre out.

The win marks the first time Canberra have won three games on the trot in 2016. 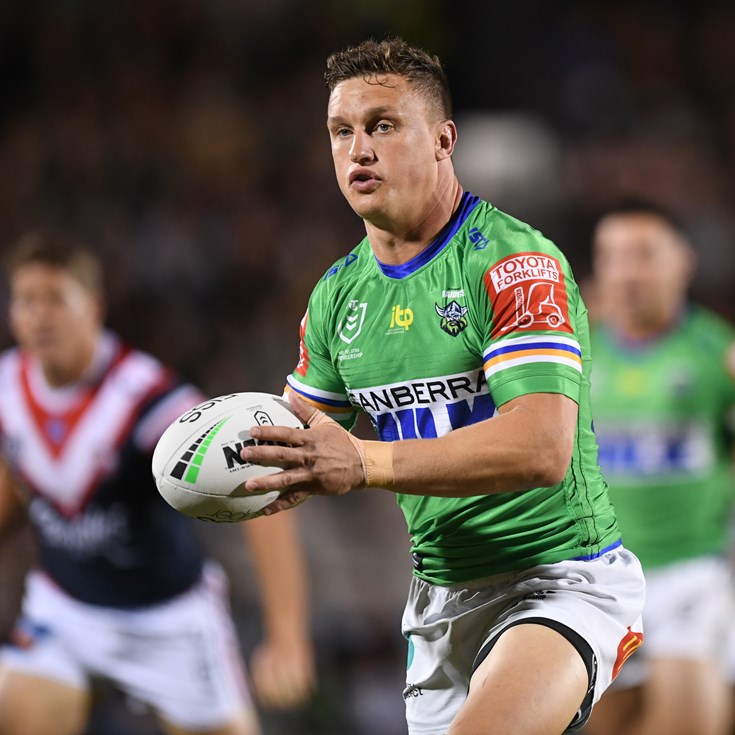