There’s been some extremely exciting news in the rugby league world in recent days. The finale of the inaugural NRL Rookie reality TV show was held on Tuesday night, and the winner, Lou Goodwin, chose to join the Raiders.

It’s been a whirlwind journey for the 25-year old carpenter Goodwin, who triumphed over former Canberra junior Jordan Martin in the finale.

“It’s been a bit of a rollercoaster ride. My face is really sore from last night from all the smiling and photos. It’s been overwhelming, I didn’t realise how many people would turn up to support me,” Goodwin said.

After being announced as the winner of the NRL Rookie, Goodwin had to choose between two clubs who had expressed interest in signing him, the Raiders and the Gold Coast Titans.

“When it came down to it it wasn’t really that hard of a decision to choose the Raiders. I’ve met with Ricky Stuart and he’s such a great bloke and all the people down at the Raiders are really supportive.”

“I’ve been at Mounties so I know how the system works. It made it easy for me to decide to go to the Raiders.”

Rugby League runs in Goodwin’s blood, with his father Matt having played 152 NRL games for Penrith, Parramatta and South Sydney.

Growing up in the small central west NSW town of Wyalong, Goodwin was captain of the Sydney Roosters U20’s side in 2010-11, before escaping the city life and retreating back to the country to play for the Albury Thunder.

A desire to have another shot at the NRL was the catalyst for Goodwin’s entry into the NRL Rookie, and he has definitely achieved that goal.

Goodwin presented with a Raiders jersey after winning the NRL Rookie on Tuesday night. 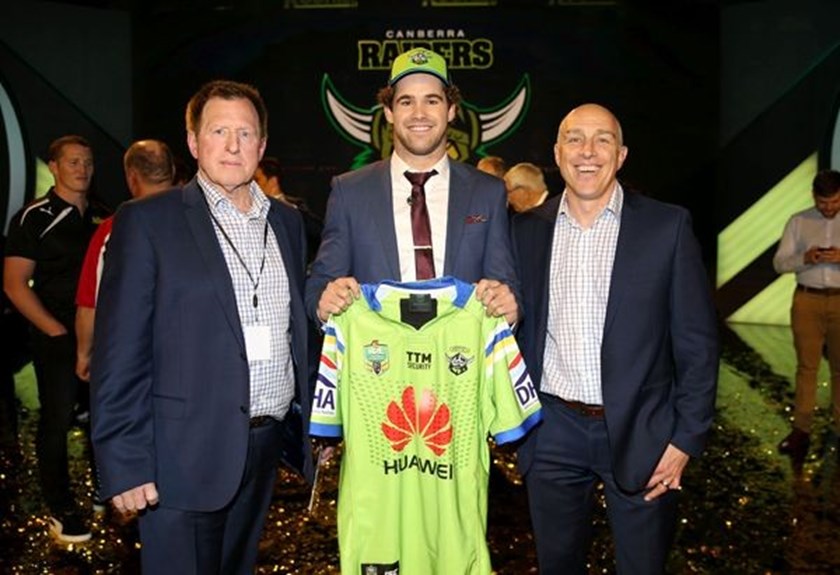 Goodwin will link up with the team for pre-season training later in the year ahead of 2017 season, but is currently undergoing rehab after tearing his ACL in March.

“I’m coming through rehab now and should be ready for pre-season when it comes around. It’s all looking good.”

“I need to improve my ball playing ability as a second-rower. You need to be able to take on the short sides and have the confidence to hit the passes and make the decision if needed.”

The tutelage of international back-rowers Josh Papalii and Elliott Whitehead will be an enormous help for Goodwin in his quest to crack the first grade team.

“I’m excited to get down there and learn. I know a few of them from playing in the 20’s. It will give me a massive boost starting pre-season training and becoming a full-time NRL player.”

Goodwin’s contract is for one year and he will be part of the Raiders second tier salary cap, with the NRL covering a majority portion of his contract. Goodwin will visit Raiders HQ in the coming weeks to meet with the coaching staff and to outline a program to ensure his rehab travels smoothly.

Presented by
11 hours ago