Another week, another notch on the Raiders winning streak!

And what a way to do it? In front of the biggest home crowd of the season!

Not only was the crowd figure fantastic, but the atmosphere was something out of the Raiders’ glory days.

Only, the glory days didn’t have the amazing Viking Clap!

I have to admit I wasn’t sure how the wonderful people of Canberra would respond to the Viking Clap idea.

What eventuated on game day was something which I’m sure was beyond many fans’ expectations.

The sound was incredible and without a doubt it had the crowd pumped to the eyeballs.

It’s something those in attendance won’t be forgetting anytime soon. The day just had a certain air to it.

Even at 16-0 down to the lowly placed Eels, it never really felt like our boys were going to lose.

With a fair share of possession and an improved defensive line, there was always a good chance the Raiders would come storming back.

And come storming back they certainly did. It was the Jarrod Croker and Brenko Lee show.

Croker not only had a huge hand in Brenko’s swag of tries, but it was the game he broke the Raiders’ single season points record. Outstanding and well deserved! It’s just one of many records Croker could shatter in his career.

It’s the kind of form he’ll be looking to take into this weekend’s clash against Manly at Brookie.

Saturday’s game shapes up as one of incredible importance for the Green Machine.

Last week saw the Raiders looking to sure up a top 4 finals birth, but this week sees them aiming at something even bigger.

Thanks to a mini stumble by the boys from the Shire, the Raiders are well and truly in the hunt for a top 2 position and a home semi-final.

A win this weekend would keep the pressure on the Sharkies to also win and keep us away from that top 2 spot.

A spot that no top 4 team wants us to occupy. Who would want to be that team that has to make their way to Canberra and play a red hot Raiders side in front of a hostile and almost certainly a sell out crowd? Nobody, that’s who!

But that dream can’t happen unless our boys are still winning games. It makes this Manly clash vital for our boys.

We have the momentum and it’s time to use it to go into the 2016 finals series the most feared team in the NRL.

Get to Brookie if you can Raiders fans, otherwise, find a tv and ride home 2016 in style. Two games to go! Up the Raiders!!! 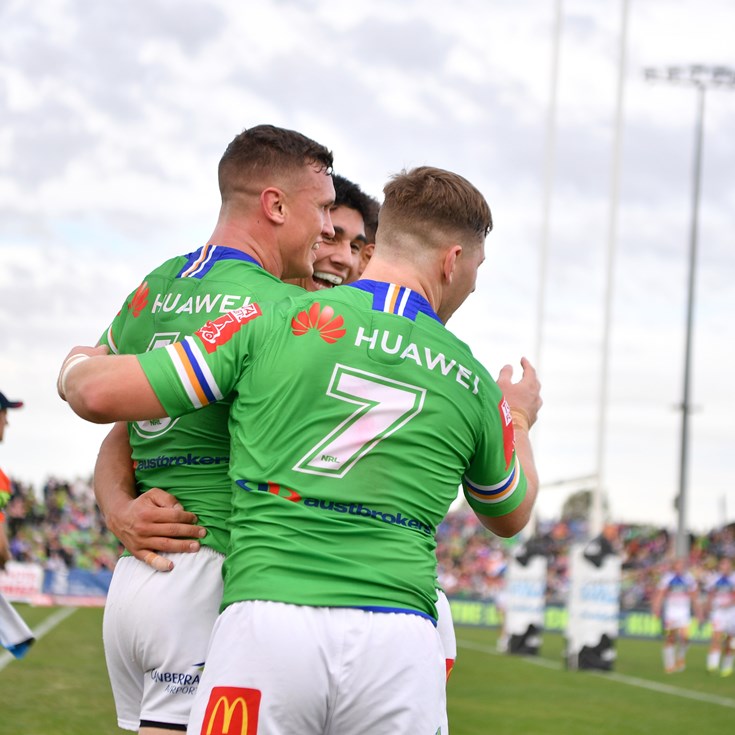