The Raiders will look to improve on their nine game winning-streak and finish the season within the top two – their highest regular season finish since 1995 - when they face the Wests Tigers at Leichhardt Oval this Sunday.

Read on for five things we can’t wait to see as the Raiders hunt for one last win ahead of their first finals appearance since 2012.

If the Raiders can come away with a win against the Tigers, they’ll be one win short of the club’s all-time consecutive win record of 11, posted in the 1989-90 and 1994-95 seasons.

Whilst some win-streaks can be attributed to facing weaker opposition, the same cannot be said for the Raiders. The side have beaten all of the other top four teams in recent rounds, subsequently proving themselves as genuine title contenders.

The Raiders can lock in finishing the season in second place for the first time since 1995 if three things happen: they beat the Tigers; the Sharks fall to the Storm; and if the Raiders’ points difference increases by seven points on the Sharks.

Though it seems the odds are against them, the Raiders’ chance at finishing second is entirely plausible. In their last encounter the Raiders dominated the Tigers 60-6. The end-of-season result is more dependent on whether the Storm can regain top form and defeat the Sharks at home. 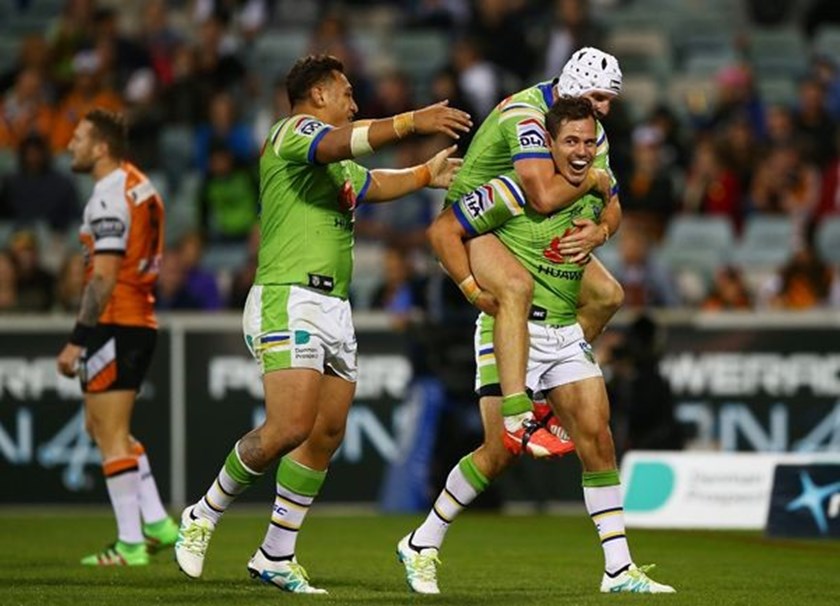 Jordan Rapana can overtake the Storm’s Suliasi Vunivalu as the NRL’s top try-scorer if he can pull off another starring performance. The two wingers are currently on 18 and 21 tries respectively.

While scoring four tries seems a big task for Rapana on Sunday, history is on his side. When the Raiders last faced the Tigers in round eight, Rapana scored a career-high four tries. Vunivalu will face the Sharks this weekend and it’s likely he will be a heavily marked man.

The Raiders have had a knack for posting strong, hard-fought wins at suburban grounds this season.

In round five they handily defeated the Bulldogs at Belmore by 22-8; in round 11 they put on a commanding 38-12 performance to down the Warriors at New Plymouth; in round 22 they cemented themselves as premiership contenders against the Sharks at Shark Park; and last week the team piled on the points to overcome Manly at Brookvale.

These suburban ground performances prove that the Raiders have no problem showing up against large or hostile crowds, so even with the Tigers’ crowd in their ears, playing at Leichhardt shouldn’t affect the side at all.

September footy means only one thing...that it's crunch time!

The weather is heating up and the action on the field is going to be red-hot on Sunday.

It’s been three years since the Raiders last played finals footy and this weekend is the first of what will be a minimum three weeks of footy in September for the side.

As plenty of the team have already talked about this week, a win on Sunday is vital for confidence and momentum heading into the finals. Make sure you are watching at 2pm on Sunday when the green machine look to keep the good times rolling against the Wests Tigers.

Agree or disagree with any of our points? Head over to our Facebook page and let us know!

CROKER OR RAPANA? SEE OUR CHOICE FOR THE PLAY OF THE WEEK