The Raiders opening-round blockbuster against the North Queensland Cowboys is just a few days away, and there are plenty of exciting storylines to keep an eye out for during the game.

Read on for the five things we can't wait to see on Saturday when the Green Machine get their season started up in Townsville.

That's enough of a reason to be excited about Saturday's clash against the Cowboys. Whether you will be watching the match from 1300 Smiles Stadium or from the comfort of your couch, start counting down the hours until kick-off because there isn't much longer to wait.

At just 18 years of age, rising star Nick Cotric will make his NRL debut on Saturday on the wing. Cotric was a standout for the Raiders last season in the NYC, spending most of his time at centre or fullback.

After his first full pre-season with the NRL squad, Cotric has bulked up to the standard required for first-grade, and he showed at the Auckland Nines that he is capable of causing of plenty of damage with the ball in hand.

Make sure you're tuning in to see how one of the Raiders youngest ever debutants performs. 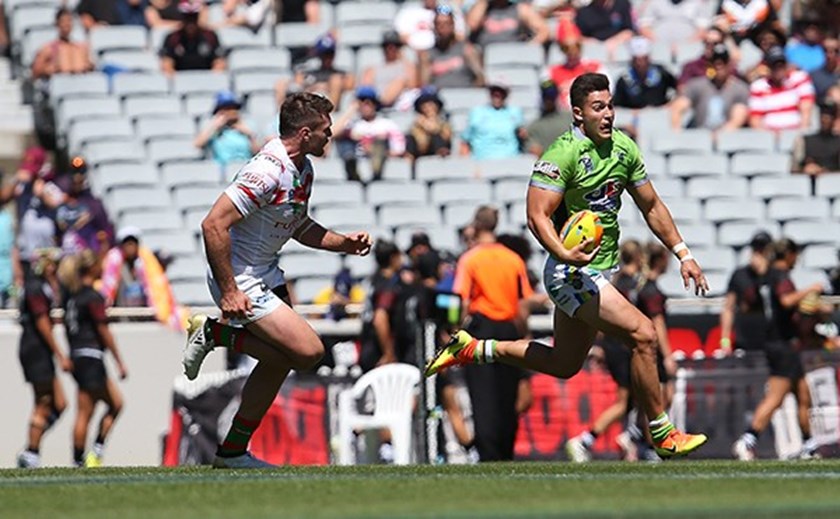 Elliott Whitehead continues to be 'Mr Fix-It' for the Raiders. After injuries to Blake Austin and Aidan Sezer in the season-opener last year, Whitehead filled in admirably in the halves for a couple of matches.

This year, Whitehead will start Round 1 in the centres, as cover for the injured Jarrod Croker. Whitehead has excellent ball skills and attacking creativity, which should suit the centre role perfectly.

How he performs on Saturday will be a very interesting aspect of the match.

The Raiders 17 for Saturday appears relatively settled. The Cowboys on the other hand, could be in for a late change or two.

Antonio Winterstein is named on the wing despite injuring his ankle during a pre-season trial match. If Winterstein isn't fit to take the field, the possible replacements include Kalyn Ponga and Gideon Mosby-Gela.

Ponga and Mosby-Gela were both extremely impressive at the Auckland Nines for the Cowboys, and if one of them does play, it could set up a youthful showdown on the wing against Cotric.

Townsville is a dreaded location for many teams due to the heat and humidity that makes 1300 Smiles Stadium a fortress for the home side.

Ricky and the Raiders coaching staff are aiming to get the team as acclimatised as possible to the weather, heading up to Townsville early on Tuesday.

The Raiders didn't shy away from hot temperatures during pre-season, training every afternoon in the heat of the day regardless of the temperature.

A full eighty minute game in Round 1 is always a tough challenge for teams, and hopefully the Townsville weather doesn't make it any harder for the Raiders on Saturday.

Agree or disagree with the five things we can't wait to see on Saturday? Head across to our Facebook page and let us know your thoughts.