It might only be round two, but the Raiders first home match of the season against the Cronulla Sharks is shaping up to be one of the most exciting games of the year.

We've picked the five things we can't wait to see at GIO Stadium on Saturday when the two sides both look to pick up their first win for 2017.

The Raiders played the Sharks three times last year, with the Sharks winning two of the three encounters. It was the loss to the Sharks in last year’s finals series that still leaves a bitter taste in the mouth of Raiders fans.

In front of 25,000 passionate fans, the Raiders held the lead for most of the match, before the Sharks evened the scores at 14-all coming into the final 10 minutes. Neither team was able to seal the game, until the Raiders gave away a penalty right in front of the posts with just under five minutes remaining.

Sharpshotter James Maloney made no mistake converting, giving the Sharks a tight two-point win in a thriller.

But the thing that stung Raiders fans the most, was Michael Ennis's full-time celebration, recreating the Viking Clap in front of a furious Raiders crowd, creating a rivalry which could explode this weekend.

How do you stop Andrew Fifita? Throw a 123kg Samoan bowling ball at him that’s how.

Junior Paulo makes his return for the Raiders on Saturday after a breakout season last year. Paulo was a human highlights reel last year with his steamrolling hit-ups and bone-crunching tackles, making him one of the most feared men on the football field.

Josh Papalii knows just how damaging Paulo can be and spoke earlier this week about what he brings to the team.

“He brings experience and mongrel, everyone knows how Junior plays the game, he plays it tough and we’re gonna need that this weekend against the Sharks,” Papalii said.

The atmosphere at Raiders matches has changed dramatically in recent times, helped in a large part by the Viking Clap, which started at the Raiders Round 24 victory over the Parramatta Eels last year.

It was in the qualifying-final against the Sharks last year that the Viking Clap really made headlines, as 25,000 fanatical Raiders fans clapped in unison to welcome the team onto the field.

With the Raiders facing up against the Sharks once again and a huge crowd expected, the Viking Clap this weekend is shaping up to be something special.

Make sure you are there to be a part of it! 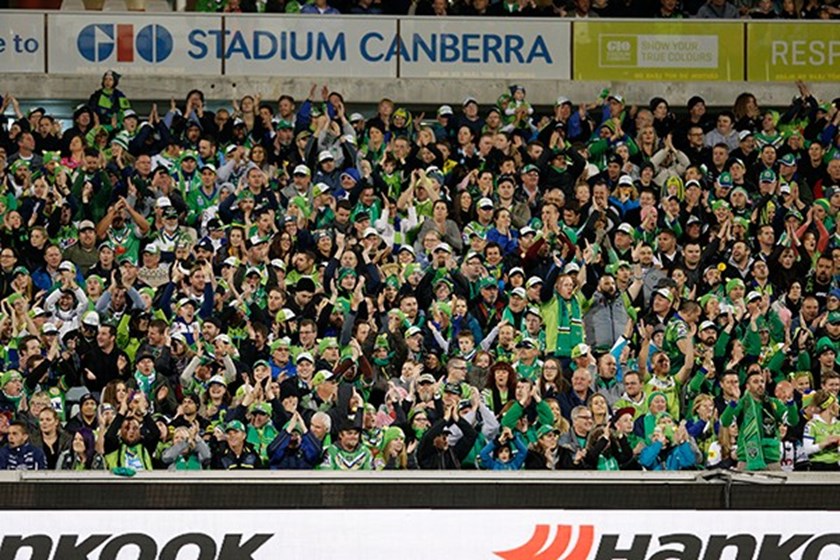 Sorensen, who grew up in the Shire, played three games for the Sharks in 2014. After a breakout season last year in the NSW Cup for Mounties, Sorensen was picked up by the Raiders and is looking to make the most of his opportunity on Saturday.

It won't just be Sorensen playing against his ex-teammates, with former Raider Edrick Lee also picked to make his second appearance for the Sharks.

Lee was released by the Raiders only a couple of weeks ago, and his swift return to GIO Stadium will surely be a strange feeling for him.

There are plenty of reason to head to GIO Stadium early on Saturday!

Gates open at 4.05pm, with an exhibition Women's Nines game between the Raiders and Sharks kicking off at 4.15pm. Following that will be the Raiders U20's taking on the Sharks, in an exciting matchup between two top-eight teams from last year.

So arrive early and make yourself comfortable, because footy returns to GIO Stadium on Saturday and it sure is looking like it will be an entertaining afternoon and night of action.

What are you looking forward to seeing on Saturday at Raiders v Sharks? Head over to our Facebook page and let us know!