After a tough start to the season, the Raiders will be looking to bounce back and put forward a big performance against the Wests Tigers this Sunday at GIO Stadium.

We’ve taken a look at five things to watch out for when the Raiders look to secure their first win of the season against an unpredictable Tigers side.

In round seven last year, the Raiders were touched up by the future premiers, going down 16-40 after a blowout second half. Then the very next week, the Raiders bounced back against the Wests Tigers and recorded their biggest win of the season, running in 11 tries for a mammoth 60-6 victory.

Last week the Raiders went down to the Sharks by an almost identical margin to last year, 16-42, and will now look to rebound against the Tigers.

Will history repeat itself and will the Raiders put on a point-scoring display? We will have to wait until Sunday to see.

Raiders captain and point-scoring machine Jarrod Croker will make his much-anticipated return from injury this weekend.

Croker was expected to be out for another two weeks, but after making a quick recovery he will pull on the green jersey for the first time this year on Sunday.

Slotting straight back into the centres, Croker brings a wealth of experience and strike power to the Raiders team who have noticeably missed his presence out on the field. With the Raiders still looking for their first win of the season, Croker's inclusion could give the Raiders the spark they’ve been missing.

Dave Taylor has dominated headlines over the off-season, with many wondering whether the former Queensland and Australian representative can recapture his past form in the nation's capital.

Taylor has been named in the Raiders 17 for Sunday's match against the Tigers, and many eyes will be watching him closely if he does take to the field at GIO Stadium.

The Raiders pack is already titanic, containing the likes of Paulo, Boyd and Papalii. The addition of Taylor adds even more beef, and if all the Raiders big boppers fire on Sunday the Tigers will be hard-pressed to contain them. 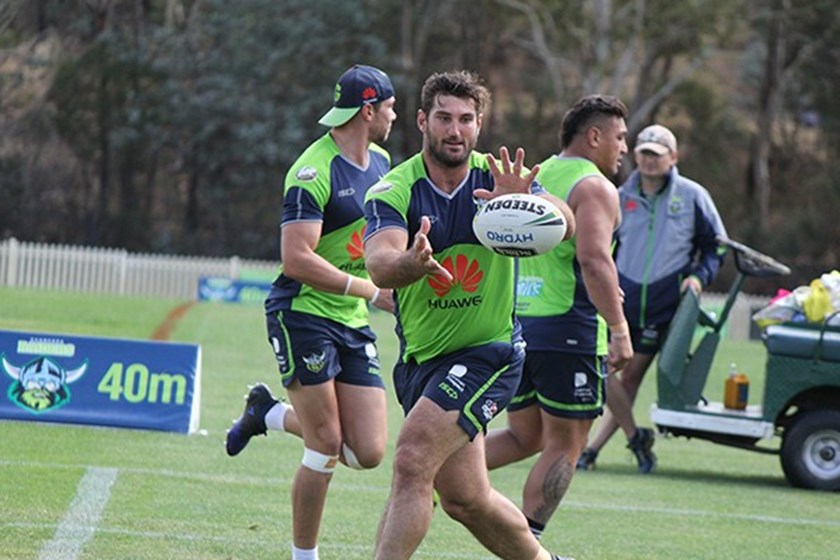 One of the keys to victory on Sunday for either team will be the performance of their halves. Both teams boast exciting and youthful halves pairing.

After an interrupted 2016 due to injuries, the Blake Austin and Aidan Sezer partnership seems to be developing each week. Both players are fit and healthy, and looking more and more comfortable with each other every week. Against a young Tigers team, the pair will need to take control to win the Raiders the field position battle.

The Wests Tigers pairing of Mitchell Moses and Luke Brooks will be looking to recreate their round one form, when they tore apart the Penrith Panthers with an exciting and expansive brand of football.

How the halves cope defensively will also be crucial, with the Raiders sure to target Moses and Brooks relentlessly.

Made up of Jordan Rapana and Joey Leilua, the Raiders 'Leipana' partnership is the most dangerous and exciting wing/centre combinations the NRL has to offer, and if past performances are anything to go by, Leipana will add plenty to their highlight reels this weekend.

Across the two games against the Tigers last year, Leilua and Rapana crossed for nine tries between them, with Leilua bagging three and Rapana grabbing 6.

The deadly combination is almost unstoppable when they get going and who could forget Leilua’s miracle backwards behind the back pass to Rapana last year, which of course happened against the Tigers.

Watch out for more Leipana magic on Sunday.

What are you looking forward to seeing on Sunday? Head over to our Facebook Page and let us know.