The Canberra Raiders will cross swords with the St George Illawarra Dragons for the 28th time this Friday night since the Red V’s merge in 1999. A number of games between the two clubs have gone right down to the wire, none more so than the following 10. Here are the 10 closest by margin.

In the most recent game to have been decided by six points, it was St George who prevailed six-points winners just after the turn of the century. It was the first time an 18-year-old Brett Finch took to the field against the Dragons and the second-last time for captain Laurie Daley. Finch crossed for a try but it wasn’t enough for the Green Machine to notch its first win over the Red V.

The Raiders clinched their sixth consecutive win over the Dragons on the final Monday of June, but they sat in a precarious position at one point down with less than a minute to play. Jamie Soward plotted over a 79th-minute field goal to hand the visitors a 19-18 lead, but the men in green would not lie down. Glenn Buttriss collected the Steeden off a Josh Dugan kick-off, before the current Dragon latched on to a Josh McCrone grubber in the following play as the Raiders snatched victory from the jaws of defeat. Canberra also clawed back from 18-6 down at half-time to do so.

Between 2003 and 2013, the Raiders only fell to the Dragons on one occasion. It was on the final Saturday of March that the Raiders ignited their stunning run in a game in which they broke a 10-apiece deadlock at half-time to run away four-point winners.

In a game in which the Raiders secured their seventh consecutive victory over the red-and-white army, fleet-footed Canberra fullback Reece Robinson bagged a hat-trick of tries on an Arctic Monday night.

The Raiders again ran out 22-18 winners when they travelled to Wollongong in Round 20 of 2013. It marked the Raiders’ ninth win on the trot over the Dragons, but St George has maintained a clean sleight over Canberra since. The win came in Dugan’s second game in Dragons colours.

The Raiders led 10-zip when they met the newly formed joint-venture outfit for the first time in history, but it was a Dragons side captain by current coach Paul McGregor who took the chocolates.

Raiders hooker Josh Hodgson crashed over for his first NRL try, but it was the Dragons who broke the hearts of Raiders fans in pulling off a miraculous comeback. Former Raider Joel Thompson willed his way over for the Red V six minutes out from full-time to draw things level at 20-apiece, before Gareth Widdop added the extras to hand his side a two-point victory. It meant the Dragons had clawed black from 18-0 down to etch an epic in rugby league folklore.

In a game in which the Raiders snagged the second of six straight wins over the Dragons –and the only clash between the two to have been decided by a solitary point – a late Brad Drew field goal iced another thriller for the men in green.

A first-half double to Canberra speedster Jamahl Lolesi wasn’t enough as St George launched a full-throttle second-half surge to forge the only draw ever registered between the two sides. The Raiders led 21-8 at the break, before the Raiders fought back to square the game at 21-apiece.

Be there at GIO Stadium on Friday when the Raiders and Dragons butt heads in what promises to be another thrilling encounter. 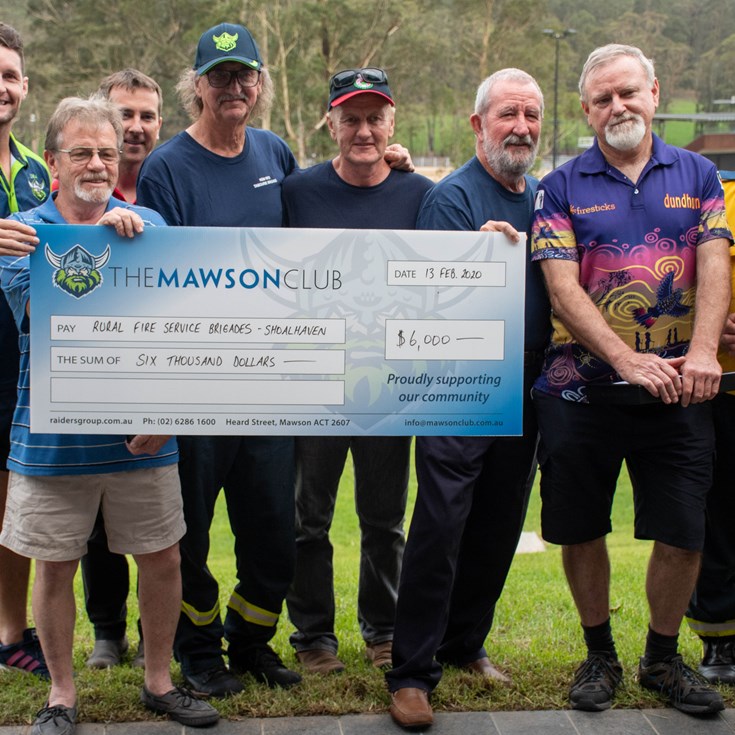 The Mawson Club donate $6,000 to RFS ‘hero’s’ in Shoalhaven Region