The Raiders avenged their last-minute Round 1 loss to the Gold Coast at GIO Stadium on Saturday afternoon by defeating the Titans 32-18.

The win was a real team effort with each of Canberra's six tries coming from a different try scorer.

Sia Soliola opened the scoring for the Raiders when he was put through by Siliva Havili from dummy half after the Titans defence targeted the decoy runner, Joey Leilua, and left him unmarked.

The try came on the back of some excellent field after the Titans' first set finished with Ashley Taylor kicking the ball out on the full from inside his own 40.

Joe Tapine had Canberra's second when Blake Austin drew two defenders with a dummy before finding him with a short ball as he hit a hole in the defensive line.

The Raiders extended their lead to 16 points within the first 16 minutes after neither fullback could get a hand on the ball while contesting an Aiden Sezer bomb allowing Jarrod Croker to grab the bouncing ball and score.

Nick Cotric was the next Raider to add his name to the list of try scorers, crossing out wide after latching on to Jack Wighton's cut out pass.

The Titans finally scored soon after halftime when Ryan James dived on the ball after Mitch Rein grubber kicked from dummy half, barely a metre from the try line.

Just minutes later the Titans were in again when Croker fumbled an Ash Taylor grubber and Kevin Proctor cleaned up the scraps to score.

The Raiders were able to stem the flow of points and get up the other end to score though with Shannon Boyd the man who barged his way over.

Canberra were over again soon after thanks to a trademark Leipana try, with Leilua drawing the winger and flicking the ball to Jordan Rapana who danced down the touchline before acrobatically planting the ball down in the corner.

The Titans were able to score their third try late in the game when they played a bit of hot potato that finished with Max King scoring next to the posts. 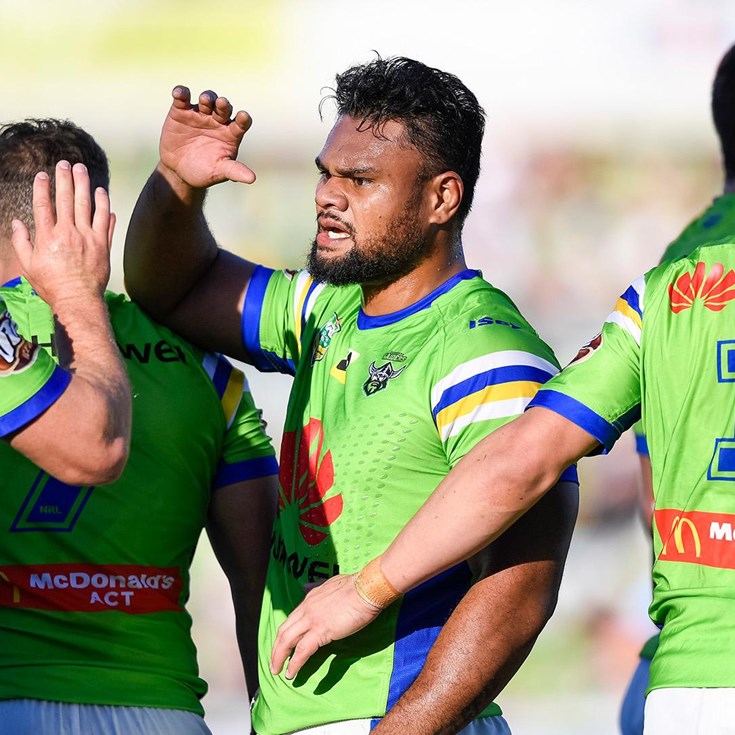