The Canberra Raiders have pulled off an amazing comeback to beat the Manly Sea Eagles 21-20 at GIO Stadium on Friday night.

Down by six with less than five minutes left, a miraculous Jack Wighton try and Aidan Sezer field goal secured the win for the Raiders.

Manly captain, Daly Cherry-Evans, hit back for the visitors when he shaped to kick on last tackle before taking the line on and spinning his way through to score.

Manly were able to extend their lead to six when the Raiders were penalised for a shot clock violation after a delayed drop out.

Manly found their way over for their second try of the night when Tom Trbojevic drew in two defenders and put Joel Thompson over untouched.

The Raiders had their first try when they spread the ball left and made the most of a two man overlap to score in the corner through Nick Cotric.

Cotric had his second just minutes later with a near identical try to his first, as the Raiders again exploited an overlap on their left edge.

As the siren sounded for half time, Manly were penalised for being offside on their try line and Croker opted for the two points, ensuring Canberra entered half time trailing 14-12.

The Raiders took the opportunity to draw level when they kicked another penalty goal after Martin Taupau caught Sia Soliola high.

Manly regained the lead just five minutes later through a penalty goal of their own after Elliot Whitehead was ruled to have tripped Joel Thompson.

Manly were reduced to 12 men in the 58th minute when Trent Hodkinson was sent to the sin bin.
Despite having one less player, the Sea Eagles were able to extend their lead with Brian Kelly stepping inside Joey Leilua to score a solo try.

Hodkinson had the chance to put the lead beyond a converted try but his field goal attempt went wide.
From the resulting seven-tackle set the Raiders found space out wide and as Cotric was put into space he kicked the ball over the Manly full back and Jack Wighton was the man who caught the ball and finished off a fantastic team try.

With less than two minutes to play Aidan Sezer placed a pinpoint kick into the corner which Tom Trbojevic fumbled and as Cotric put his hand on the ball it looked as if he had his hattrick and the match winning try only for the video referee to find Trbojevic had touched the ball with a foot on the touchline.
From the resulting set, Sezer buried a field goal to cap off a famous win for the Green Machine. 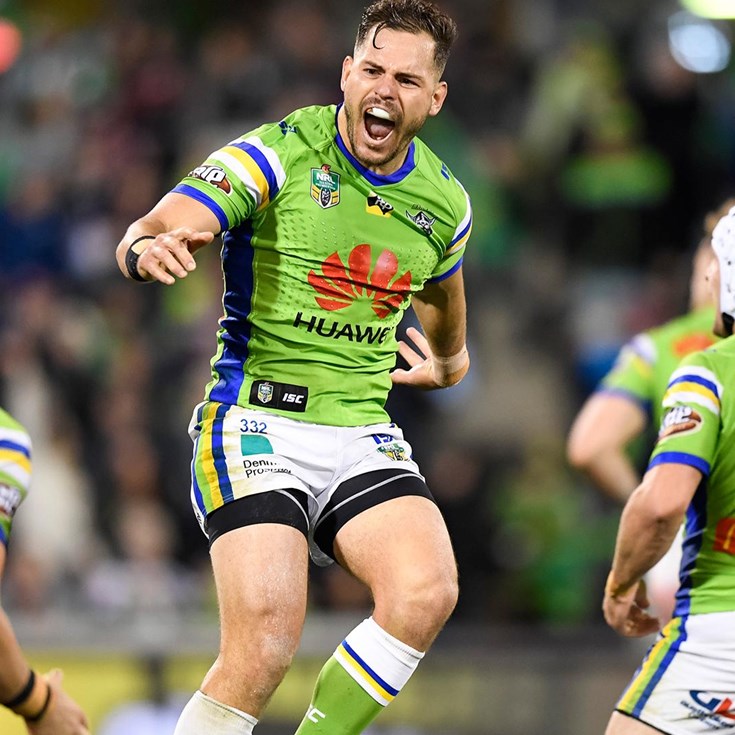 Round 12: The Final Word

Presented By Austbrokers Canberra Thu 24 May, 2018