After 11 series of failure in almost as many years, 11 baby-faced Blues helped NSW take a gigantic step towards turning the State of Origin tide at the Melbourne Cricket Ground on Wednesday night.

Brad Fittler marked the beginning of his tenure as NSW coach with a 22-12 win, largely thanks to the brilliance of his fullback, James Tedesco, who only weeks ago was in danger of losing his Origin jersey.

The NSW No.1 had a hand in all four of NSW's tries, providing the potency Queensland lost with the news Billy Slater's hamstrings would deny him the chance to take the field in the opening game of the series.

It was a match that marked the end of an era for Queensland – with so many familiar and successful faces not around – and the dawn of a new one for NSW.

For years, NSW's preparations have been dogged by controversy and uncertainty.

For years, Queensland never seemed flustered. It seemed as though they never had any distractions.

Until this year. Until now.

If it wasn't already panic stations, then the late withdrawal of Slater just two days out from kick off would have left even the most one-eyed Queenslander fearing the end of a dynasty.

They were the overwhelming favourites despite a lot of their team being in primary school when the Maroons dynasty of dominance began.

On paper, there was a notable discrepancy between the two forward packs. And it came as no surprise that it was the fast feet of Damien Cook that exploited some tiring Maroons forwards to allow James Maloney and James Tedesco to link up for the opening try of the night.

At the mid-way point of the opening half it was 8-0 in favour of the favourites. Queensland didn't look like getting themselves back in the contest.

But against the run of play Valentine Holmes justified his selection over Darius Boyd when he intercepted a Maloney pass to dash 90 metres down field and reduce the margin to just two points.

And just like that Queensland were back. Like so many times before, they came up with the right play at the wrong time for NSW. The momentum shifted.

They went into the half-time break with the ascendancy. And not long after they returned with the lead.

A Ben Hunt grubber in behind Josh Addo-Carr, which came off the back of a Maloney forward pass, allowed Dane Gagai to continue his impressive try-scoring streak in Origin.

And just like that the Maroons were up 12-8. The one-two sucker punch. It had knocked NSW out so many times before.

But a knock-on from Gagai the ensuing set denied Queensland the chance to test the resolve of these baby Blues, allowing Tedesco to put a rampaging Latrell Mitchell in for his first Origin try.

Tedesco was in everything, breaking through some soft Queensland defence the very next set, paving the way for Tom Trbojevic to leap above Holmes and give NSW an 18-12 advantage with 30 minutes remaining.

Tedesco was the best player on the field. And in case you had any doubt, he busted through again to send Addo-Carr over in the corner in front of his adoring Melbourne fans.

Now they'll head to Sydney to close the book on one of the most successful reigns in rugby league history.

Maloney was proud of his teammates for overcoming Queensland's late fightback.

"Impressive, it was pleasing. It went in swings. They all handled the occasion and it was a good win," he told Channel 9.

"I knew he was suited to this, he was fit and plays footy," he added in reference to rookie halves partner Nathan Cleary before paying tribute to Tedesco. "He troubled them all time, he's so good in this arena."

Maroons captain Greg Inglis thought his side had plenty to improve upon for Origin II.

"I've got to go back on the video and have a look with the coaching staff. There was more I could do, helping out the spine more. All I want the boys to do now is go back and play good club footy."

News & Notes... The crowd at the MCG was 87,122... Dane Gagai scored his eighth try in eight Origin games... Valentine Holmes scored his fifth try in three Origin games... it was NSW's fourth win from five games at the venue... James Roberts left the field in the 73rd minute...

Game I is done and dusted! Don't miss Game II of Origin at ANZ Stadium on Sunday 24 June. Click here to get your tickets 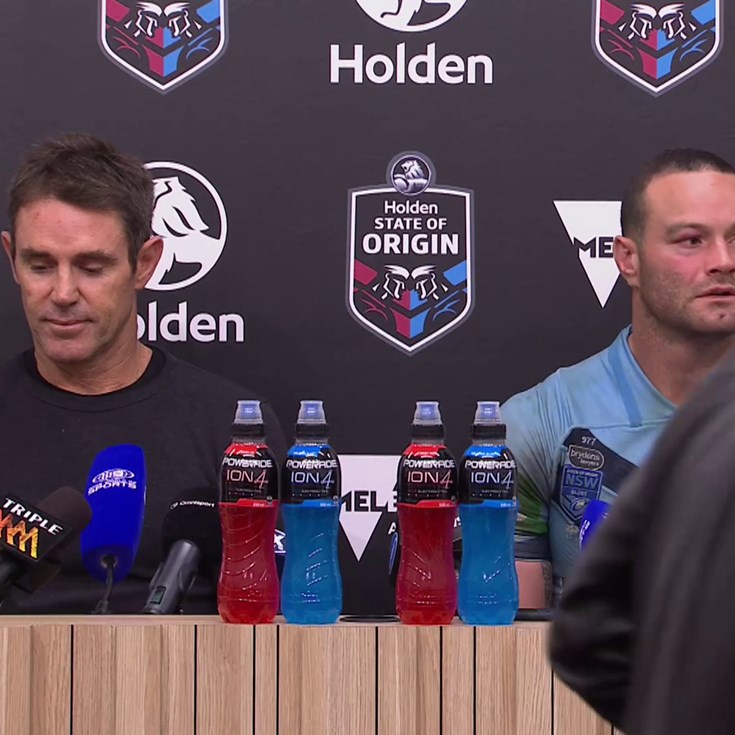 Inside The NRL – State of Origin I