The Canberra Raiders have thrashed the Wests Tigers 48-12 at Campbelltown Stadium on Sunday afternoon.

The Raiders romped to victory, outscoring the Tigers 38-0 in the second half with seven Canberra players crossing for tries.

The Raiders nearly opened the scoring within four minutes when they created an overlap on the left edge only for Kevin Naiqama to knock down Jack Wighton's pass to an unmarked Nick Cotric.

Canberra fans weren't left waiting for long with the Raiders scoring straight off the scrum after spreading the ball from left to right with Joey Leilua finding himself outside Mahe Fonua and crossing out wide.

The Tigers hit back soon after with Chris Lawrence running straight through the Canberra defence from ten metres out to score under the posts.

Wests had their second just minutes later when Corey Thompson stepped his way through the Raiders defensive line.

Things got worse for the Raiders when Blake Austin was sent to the sin bin in the 23rd minute for committing a professional foul.

The tide began to turn when Josh Hodgson came on in the 25th minute for the first time since tearing his ACL during the World Cup last year, with the hooker making an immediate impact.

Just two minutes after coming on he put Josh Papalii through a gap only a metre out from the Tigers' try line.

The Tigers thought they had their third try when Alex Twal crossed just before the break only for the video referee to rule that the ball had been illegally stripped from Cotric in the build-up.

Joe Tapine scored for the Raiders straight after halftime to give them a 16-12 lead with Hodgson looking one way from dummy half before going the other and putting Tapine through a gap.

The Raiders were over again when they took the ball down the blind side with Elliot Whitehead giving the ball to Jarrod Croker who used quick hands to flick the ball to Cotric who ran over the top of Thompson to score.

Tapine had his second try when Hodgson ran from dummy half and drew two defenders before flicking the ball out the back and laying on his third assist of the game.

Blake Austin joined the list of try scorers when he was put through the gap by an Aiden Sezer inside ball before stepping the fullback to score.

Michael Oldfield was the next to score as he finished off a great team try that started with a Whitehead break from inside the Raiders half before the ball went through five sets of hands with Liam Knight's looping pass finishing off the play.

Leilua had his second try when the ball bounced up perfectly for him after the Raiders took the ball to the line on last tackle and grubbered it through.

Knight crossed for the Raiders ninth try in the dying minutes when he spun through the defence and stepped past the fullback to score under the posts. 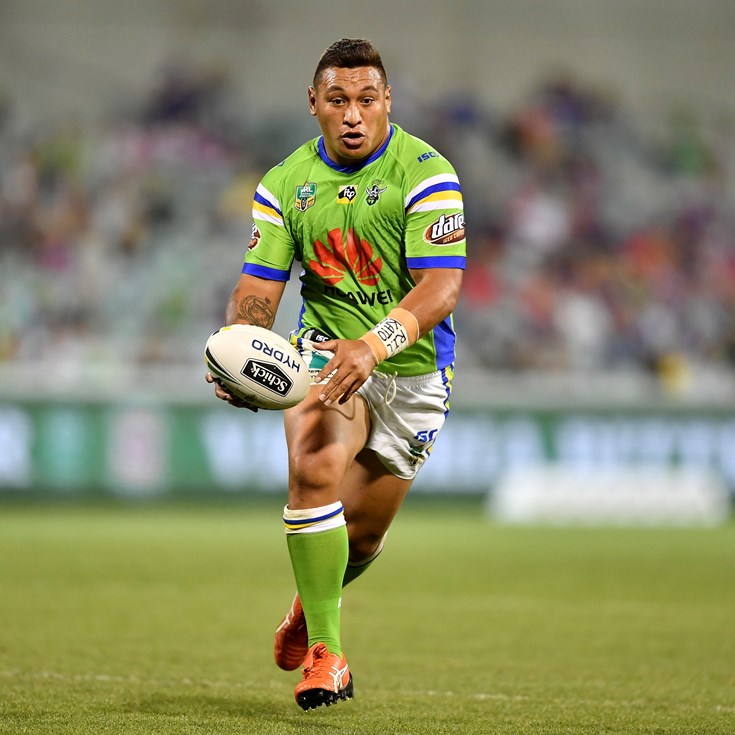