They're the players that get the full respect by their teammates but are often not valued as highly by the fans or the representative selectors.

But who is the most under-rated player in the Telstra Premiership? The NRL.com experts have their say.

Kenny Bromwich is a key cog in the Melbourne Storm engine room. His elevation to the starting side this year is long overdue and he can fill any role in the pack.

Jarrod Croker. Rep footy keeps evading him but Canberra definitely doesn’t under-rate him. Still, can anyone else name how many NRL games he’s played? Or what very cool milestone is likely to happen towards the end of 2019? (see answers below). When Croker played for the NRL All Stars in 2016, coach Wayne Bennett had this tip: "If I was the picking the NSW side he would be the first player I'd pick. I love him," Bennett said. (Answers:  233 games … he is on the verge of becoming the first player under 30 to score 2000 points … he’s on 1790 and he’s only 28).

While the likes of Boyd Cordner, Luke Keary and James Tedesco attract most of the accolades, Sioisiua Taukeiaho has been an integral part of their success in recent seasons. The 26-year-old regularly plays big minutes in the middle and helps set a platform for Keary and Cooper Cronk with his powerful runs and high work rate. He was one of Tonga’s best at the 2017 World Cup and has maintained that form for the Roosters and at international level.

Adam Reynolds has the best kicking game in the NRL, is a clever organiser, holds his own in defence, was good enough to orchestrate South Sydney’s 2014 grand final win and is an elite goal kicker but only has a paltry two Origin matches to his representative resume.  Unusually so for a halfback, it’s often undervalued how important he is to South Sydney’s success.

Mitch Aubusson. The third most capped Rooster of all-time with 266 games across six positions. Adored by the Tricolours and regarded by Trent Robinson as the blueprint of a true clubman. Phil Gould has long believed him worthy of a NSW bench spot and just doesn’t seem to play an average game, let alone a bad one.

A constant and critical presence in the Sydney Roosters side for a decade now, hooker Jake Friend is the glue that binds the pack. For a guy who has won two premierships and proven himself as a big-game player in finals football it is a travesty Friend has not played for Queensland at Origin level despite having one Test cap for Australia. Granted, Cameron Smith has been in front of him, but with the Maroons losing last year’s series his time must surely have arrived.

A look inside the new Bankwest Stadium

Often unfairly maligned by fans, Will Hopoate has consistently been one of the Bulldogs' best. Always there to make metres when nobody else in willing, he finished fourth in runs in 2018 and leads the competition in 2019 - and also sits third with an average of 194 metres per game in the first three rounds. He's also managed to rustle up a couple of try assists. He's reliable and can be counted on to always do his job but often overlooked in favour of flashier players.

There are a few options but it’s hard to go past Mitch Aubusson. He’ll forever be in that elite group of players that didn’t play as many rep games as he should have. His versatility is second to none and his role in last year’s grand final got swept under the carpet just the way his career sometimes does. He’s keeping someone like Angus Crichton from starting and is a 250+ one club player who has got better with age. Notable mentions: Matt Prior, Isaah Yeo and Jarrod Croker.

Sharks halfback Chad Townsend is a now premiership-winning halfback who has forged successful halves partnerships with a number of playmakers of different styles. He has a fine all-round game and is one of the best defensive halves in the competition to boot. He has developed an impressive consistency too, with his worst games now not too far behind his best. For some reason he never comes up in representative conversations and while the Blues are starting to get to a point where they are actually spoiled for choice in that position you could do a lot worse than throwing a sky-blue jersey to Townsend.

In the national capital, Raiders captain Jarrod Croker is as valuable as the Royal Australian Mint. The goal-kicking left centre is Canberra’s highest scorer, is not far away from becoming their all-time top try-scorer and by the time he hangs up his boots, will give namesake Jason Croker a run for his money to be their most capped player. It’s a shame he has never been given a chance to perform on the State of Origin stage.

There’s a good chance Craig Bellamy has a poster of him hanging on the wall in his office but outside of the Melbourne Storm camp, Dale Finucane does not get the credit he deserves. Super tough, ultra competitive and very well disciplined, he’d be every NRL coach’s dream forward. And the man can sing. One thing is for sure, if he’d grown up in Bundaberg and not Bega he’d have played a dozen Origins for Queensland by now.

He's played plenty of matches for Queensland and his country, but Matt Gillett still doesn't get the recognition he deserves. The Broncos veteran can fill in at a variety of positions and rarely, if ever, makes any mistakes. Always one of the first players picked by Anthony Seibold.

Since starting in the NRL in 2013 up until this season Kenny Bromwich has made an impact from the bench. But this year coach Craig Bellamy has given the 27-year-old a starting spot in the second row. His point of difference from a number of other forwards in the game is his versatility to play any position in the forwards.

It's hard to believe Dale Finucane  doesn't have a single Test cap or State of Origin appearance to his name. One of the most reliable middle defenders around and player who has moved with the times as the lock position has evolved, he is a key piece of the Storm jigsaw who aside from four games for NSW Country, has received no love at rep level.

It’s not a coincidence the Warriors developed a hard edge and greater discipline upon the arrival of Tohu Harris from Melbourne last year. The Warriors back-rower has done wonders for the club both on and off the field, bringing an aura with him given his success and dealings at the Storm. He would receive for more accolades had he played most of his career in rugby league-dominated cities.

The moment Xerri learned of his debut

Josh Hodgson is the type of player that typifies the attitude of the North English town of Hull, from where the Raiders lured him to Australia. Tough, uncompromising, loyal and humble. Hodgson is an integral part of the Green Machine and is one of the most under-celebrated hookers in the game. If he played in an era that wasn’t under the ever present shadow of Cameron Smith, fans would be lamenting “If only he was available for Origin”.

Chad Townsend has always impressed me and probably doesn't get the credit he deserves when the Sharks are winning. So often he's responsible for the plays that are written about or featured in highlights of games, but every club needs a player like him to allow the more high profile players to shine.

Chad Townsend. He doesn’t come up in State of Origin conversations, but one of the most consistent halves in the game. Like Craig Wing said in the Sunday Session podcast with Chris Kennedy and Kenny Scott, he is one of the most under-rated halves in the NRL and has steered the ship at the Sharks to bring out the best in Shaun Johnson after just three rounds of 2019.

My underrated player sounds a bit silly, but it is Tom Trbojevic.  We all know he is a talented player, but his presence on the field last Saturday took Manly from being a team that looked like wooden spooners in the opening rounds to a team that has the potential to make the top eight. He was involved in half of Manly's eight tries, scored two of his own and made 175 metres. Talk about impact!  No surprise his brother Jake also plays much better when Tom is on the field. 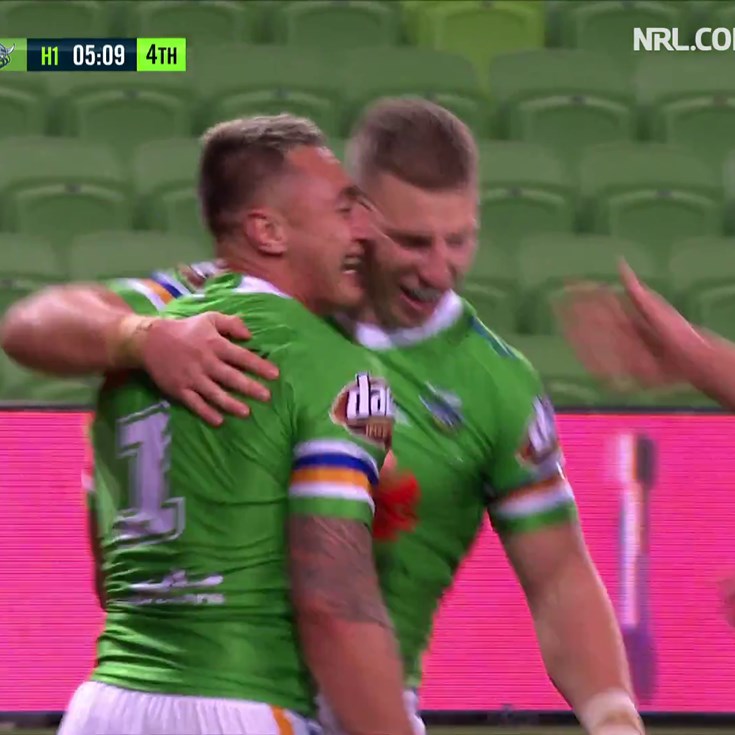 elcome back the the NRL, Jordan Rapana

Sponsored By Specsavers 3 hours ago