The Canberra Raiders have kept an opponent scoreless for the third time this season after defeating the Wests Tigers 28-0 at Bankwest Stadium.

In what was a gritty contest, tries late in the first half to Jordan Rapana in his 100th Raiders appearance and John Bateman swung the course of the match s the Raiders moved into the top four.

The Raiders opened the scoring four minutes into the match through Bailey Simonsson. Fine work from Jarrod Croker ensured that the ball remained alive before an instinctual kick from Elliott Whitehead sent the ball Simonsson’s way, who gathered the ball and scored.

After a grinding period in the match where both sides fought hard for field position, Jordan Rapana nearly doubled the score in his first game back from injury. However, a try saving tackle from Moses Mbye bundled Rapana into touch.

With five minutes until the break, the Tigers had a golden opportunity to score but Simonsson showed his strength to hold up Luke Brooks over the line.

The Raiders then turned defence into attack in the blink of an eye as Jordan Rapana scored an outstanding try instigated by Aidan Sezer. The halfback made a break downfield and with the defence closing in, Sezer decided to put in a crossfield grubber kick.  Cotric was first to the ball and the centre soccered the ball to Rapana who scored.

Bateman made it two tries in three minutes as the Raiders entered the sheds with an 18-0 lead. The second rower linked up with Charnze Nicoll-Klokstad to score his third try in Raiders colours.

The second half returned to a grind but Jarrod Croker scored in the 65th minute to extend the Raiders’ lead. The captain took advantage of a Jack Wighton linebreak as the Tigers defence were unable to reset in time.

The Tigers continued their search for a try but Aidan Sezer intercepted Jacob Liddle’s pass and ran 80 metres to score.

The shutout marks the first time Raiders history that three opponents have been kept scoreless in a season. 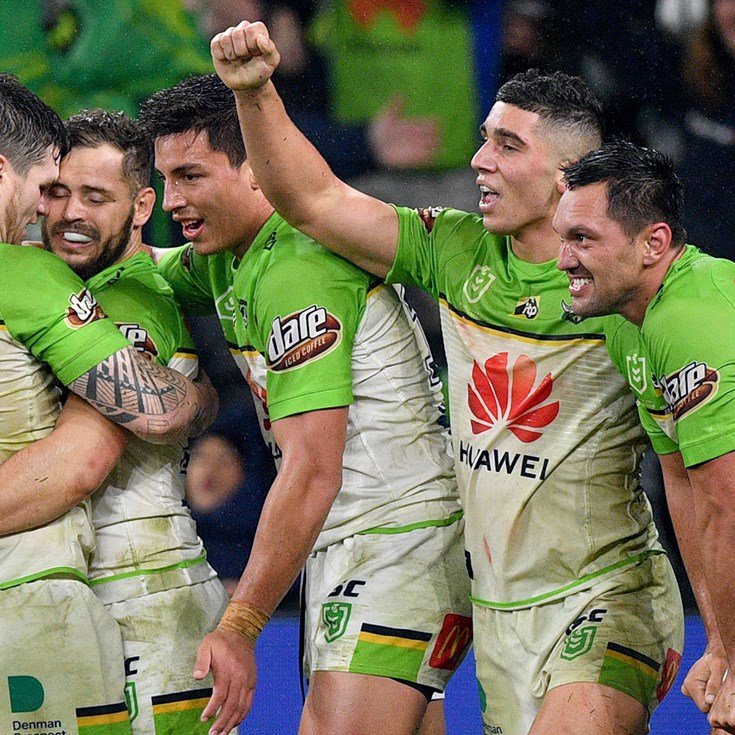