Jarrod Croker has led the Canberra Raiders to a memorable win, helping defeat the Cronulla Sharks 22-20 in front of 10,021 fans at GIO Stadium on Thursday night.

This is also the first time the Green Machine have defeated the Sharks at GIO Stadium since 2012.

In what was a milestone game for Croker, the skipper managed to take his Raider’s try-scoring tally to 120 – equalling former Raider Jason Croker’s record.

The Raiders took an early two-point lead after Jarrod Croker had the ball raked out of his arms by Cronulla fullback Matt Moylan.

Seven minutes later Aidan Sezer cut through the Sharks defence with a lovely right foot step to score the first try of the match.

Just another seven minutes later, Bailey Simonsson scored a try-of-the-year contender after the winger dived past the Sharks defenders and plant the ball down in the corner whilst in mid-air.

Captain Croker added to the lead in the 26th minute after opening up the Sharks defence, allowing him to equal the Canberra Raiders all-time try-scoring record.

The Sharks got one back ten minutes from half time after a grubber kick was caught and grounded by Josh Dugan.

Four minutes later the Sharks got their second try of the night, with Josh Morris picking up a loose ball and diving over the try line.

A last -minute attack from the away side fizzled out to nothing as the Green Machine went to the sheds with a 12-point lead.

The Raiders started off the second half on the back foot, after Sharks forward Braden Hamlin-Uele broke through the Raiders defence and crossed under the posts.

Ten minutes later Josh Dugan crossed for his second of the night, with a Shaun Johnson conversing equalling the game up.

A penalty for the Raiders on the 30-metre line allowed for Croker to convert his fifth kick of the game and put the Raiders back in front.

With two minutes remaining, Jack Wighton thought he had crossed for the winner but was considered no try due to an obstruction in the lead-up play.

A last-gasp attempt from the Sharks was intercepted by Croker, who held onto the ball as the siren sounded, giving the Raiders the victory over the Sharks. 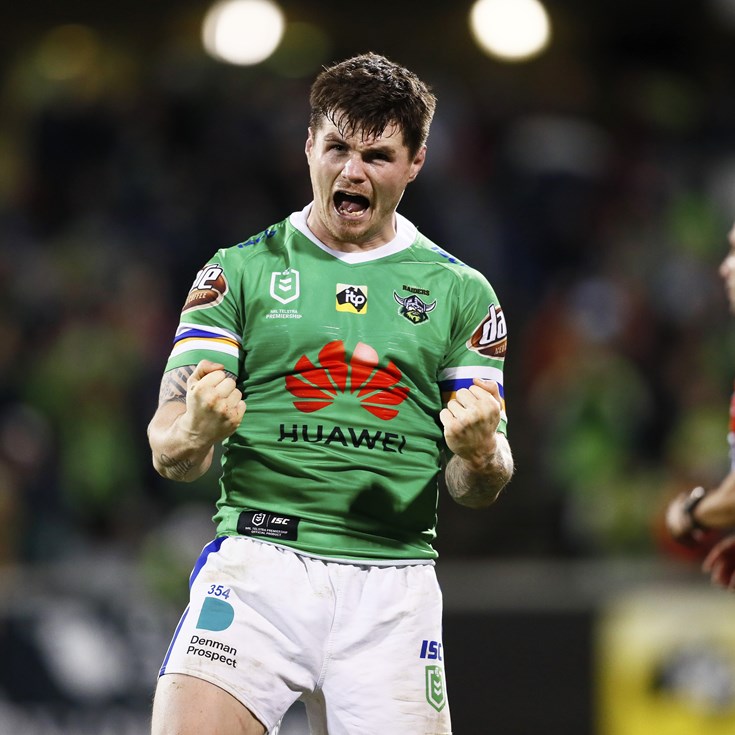