The Canberra Raiders will be fighting for a spot in the Jersey Flegg Cup Grand Final when they take on the Sydney Roosters this Saturday night at Netsrata Jubilee Stadium.

The Raiders enjoyed a week off after a Toby Westcott field goal saw the side claim a thrilling 19-18 win over the minor premiers, the Cronulla Sharks.

The Roosters head into the bout off the back of a tight 28-24 win over the Bulldogs, scoring a try in extra time to win the game and progress into the preliminary final.

The Green Machine head into the match with four game win streak, and will be hoping to extend it to five and cement their spot in the final.

They’ll also be looking to beat the Roosters for the first time this season, with the Raiders falling short on both occasions in Round 4 and Round 21 respectively.

Last time they met, the Roosters defeated the Raiders 28-16 in Round 21. On that occasion, the Roosters came from behind to score four second half tries to claim the win.

Raiders Coach Ash Barnes says he’s not at all worried about the past two games against the Roosters and has been preparing his side for a tough and hard-fought match.

“They’re a really good defensive side,” said Barnes. “They've got a really big powerful forward pack but at the moment it’s more about ourselves… it’s just about getting our defence right.”

“The boys are really keen to go up against them again and to get the job done.”

Barnes said he was proud of the team’s effort against the minor premiers, and that the win came from the push and motivation between the players.

“It was a tough game, but it was won off the back of our defence and the boys desire to turn up for each other,” said Barnes. “It was really pleasing for us, so they were quite satisfied with that.”

“We could rest ourselves at the start of the week to get over such a tough and physical game, get our bodies right,” said Barnes when asked about the week off, saying it was well deserved.

The team has suffered many injuries throughout the season, yet despite a few players out long term, the Raiders will be looking to field an almost full-strength side this weekend.

“The players available for this weekend have done a fantastic job, it’s been a real squad effort this year to get ourselves to a point of where we are now,” said Barnes.

“I’m really looking forward to it, and so are the players as well. It should be a tough but good challenge.”

The Raiders will be hoping to secure a fifth win in a row and lock up a place in the Jersey Flegg Cup Grand Final, but will first have to go through the Sydney Roosters this Saturday night. 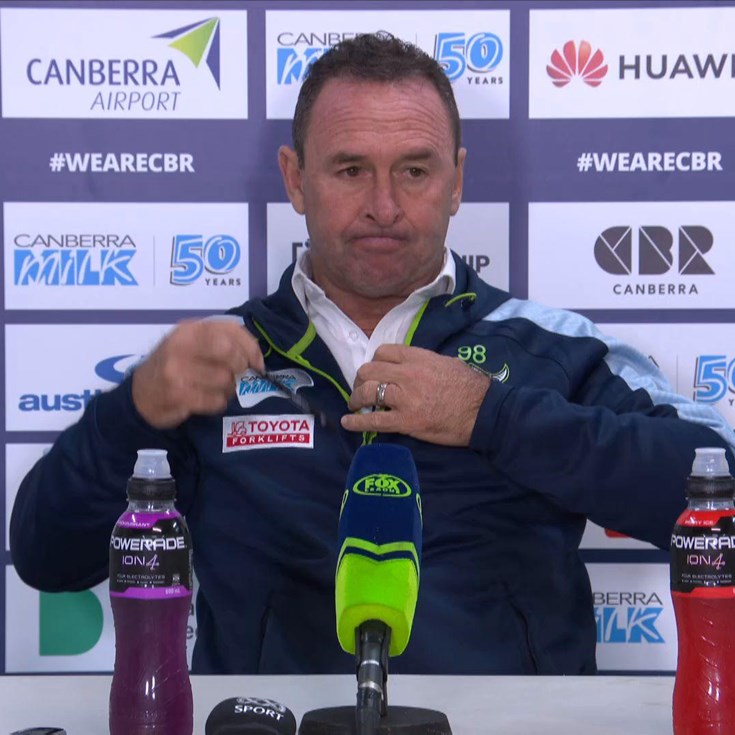 Presented By Specsavers 2 days ago
02:25