Canberra's quest of making amends for last year's grand final defeat have been put on hold but Nick Cotric's sleepless nights continue to drive him towards going one better regardless of how the rest of the season pans out from May 28.

While Cotric may be brushing Raiders co-captain Jarrod Croker for early morning running sessions more often than not during the competition's hiatus, the 21-year-old winger is linking with close mate Emre Guler to get through his programs of an afternoon.

Once the green light if given for the NRL to resume, which Cotric hopes is in just over a month's time, he'll reunite with Croker and the remainder of the squad to restart preparations around a push towards the finals.

"I think everyone has that fire in the belly, losing a grand final isn't the best thing in the world," Cotric told NRL.com.

"It sticks with you and you have a few nightmares and restless nights. After the game I couldn't sleep for a couple of days.

"All you want to do is get back on the field and go one better so this break has made it harder to do that.

Bailey's Bunker: Bateman unlikely to be fit for May 28 return

"I am always teaming up with Emre Guler or Jarrod Croker but Croker goes for runs too early. I aim for about 1pm and he aims for 9am.

"Croker messages me at 9am to join him and I'm usually out cold. I'm not an early bird and like my sleep-ins. I'm loving the sleep-ins, I'm not going to lie. I'd rather get everything done later in the day."

Cotric snubbing Croker's requests to join him for fitness training isn't personal, nor is it about the skipper's new four-year deal he signed in February.

The incumbent Australia winger is also expected to extend his time in lime green when clubs can resume contract negotiations with players.

"It's in the works now, I'm just waiting on everything with the coronavirus to get out of the road and hopefully it can be finalised," Cotric said.

The Canberra product was relishing the chance to switch to right flank alongside new recruit Curtis Scott after three seasons beside Croker on the left edge.

"Curtis is great to work with, I get along with him well off the field and we were getting a good thing going there," Cotric said.

"He's an experienced player who has played in a couple of grand finals and won one. I think if we can keep doing the little things right and anything can happen from there.

"And If he gets tired and wants to hang out on the wing I've told him he can to gee him up."

Cotric has attempted to lift the spirits of NRL fans and players after the competition was suspended indefinitely in March.

His use of popular social media application TikTok, where he showered in Raiders kit to the tune of "hello darkness my old friend" quickly circulated and reached the news.

"I just posted it not thinking it was going to spread that quickly, it was just a bit of a laugh," Cotric said.

"I think it just shows everyone is losing their minds and getting a bit bored but I got pretty upset when I found out the season was stopping and wanted to lighten up the mood."

The struggle is real 😭💔 @nikcotric 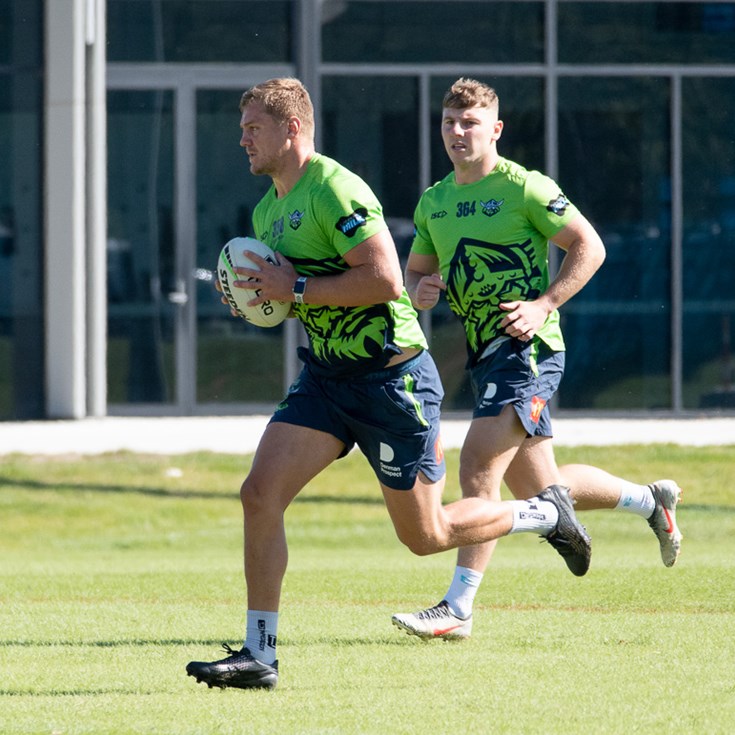