This time we’re taking a look at the centres.

Harley Smith-Shields – one game, one try

*Numbers include starts only

The skipper became the first player to reach 2,000 NRL points before reaching the age of 30 in round one and also became the fifth highest point scorer of all time in round 16 against the Bulldogs.

At right centre, new recruit Curtis Scott started the season brightly as he developed a dangerous combination with his winger Nick Cotric.

After the restart, the two centres continued where they left off in an important win against Melbourne but a combination of form and injuries meant that Michael Oldfield came into the side at right centre to replace Scott.

Oldfield performed admirably in his three games at centre but injured his hamstring midway through the Raiders round ten win against the Roosters. The subsequent reshuffle saw Jordan Rapana move to the centres.

During the following match against the Rabbitohs, an injury to Charnze Nicoll-Klokstad saw Rapana move to fullback midway through the match. As a result, Harley Smith-Shields moved to right centre as he made his NRL debut from the bench.

Curtis Scott returned from injury in round 12 against the Cowboys and hit the ground running with a series of impressive performances.

Meanwhile, Croker continued his season in fine form with his goalkicking in particular impressing. The captain scored five tries, assisted a further eight and kicked at 81.6%.

Unfortunately, Curtis Scott suffered a season-ending injury in round 16 against the Bulldogs. Matt Timoko came off the bench during that match to make his NRL debut but Jordan Rapana was moved to centre for the rest of the season.

Rapana held his own in the centres and chipped in with a number of try assists while Harley Smith-Shields and Matt Timoko saw more game time in the Raiders final match of the regular season against the Cronulla Sharks.

As the Warriors were left stranded in Australia, their home game was relocated to the Gold Coast. With the Raiders flying up on the day of the game, their game day preparations were interrupted.

In his second game for the club, Curtis Scott was impressive to say the least. The former Storm man was key for the Raiders coming out of their defensive half, making a number of dirty carries which was topped off at the end with a try off a George Williams grubber kick in behind.

A crucial win for the green machine as they played at the Cowboys brand new stadium for the first time. The Raiders two centres Curtis Scott and Jarrod Croker proved to be the difference in what was a gutsy victory.

With Jason Taumalolo crossing over for the home to give them the lead it was Curtis Scott who crossed over for the Raiders four minutes later out wide to put Canberra level with North Queensland. Jarrod Croker slotted the conversion from the sideline in the 56th minute to put his side ahead 14-12. That kick proved to be decisive as the score stayed the same until the final whistle.

With the Raiders resting a number of key players ahead of their first week in the finals, much of the pre-game focus was placed on the debutants that were named to play. Amongst the fresh faces in Ricky Stuart’s side were Harley Smith-Shields and Matt Timoko.

Both were playing just their second game for the club and had a massive test against Cronulla’s vastly more experienced side. Timoko and Smith-Shields were pivotal in the 38-28 win with the latter crossing over for a try after a short dropout attempt from the Sharks was pounced upon by the former Gungahlin Bulls junior. 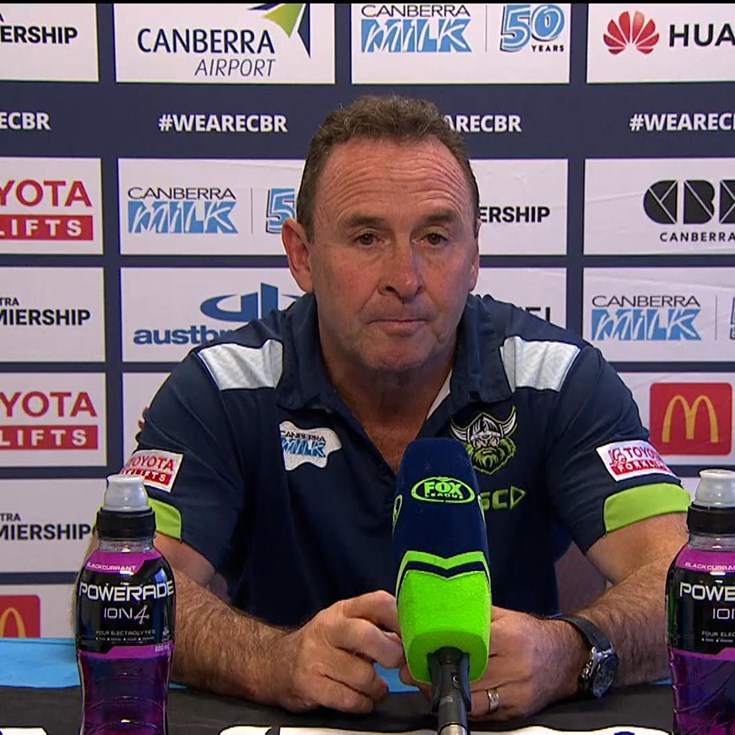