The Canberra Raiders have gone down to the South Sydney Rabbitohs 34-20 on Thursday night at GIO Stadium.

Canberra were unfortunate to lose star halfback George Williams to a leg injury in the warm-up, forcing Sia Soliola onto the interchange bench and Elliott Whitehead slotting into the halves.

A penalty for holding down led to the Rabbitohs electing to take a shot at goal in the early stages of the match. Adam Reynold made no mistake, slotting the penalty conversion to give the visitors a 2-0 lead.

However, the Raiders fought back to score the first try of the night through Jordan Rapana who caught a beautiful cut-out from fullback Caleb Aekins. The Raiders took an early 4-2 lead in the opening 10 minutes.

Raider’s winger Bailey Simonsson was placed on-report for a lifting tackle on Cody Walker in the 13th minute.

South Sydney responded with a try of their own through winger Alex Johnston. Adam Reynolds converted to re-gain the lead 8-4.

The Raiders struck straight-back through fill-in halfback Elliott Whitehead who finished off a great team try. Rapana kicked his first NRL conversion to give Canberra a 10-8 lead.

The Rabbitohs hit back right before halftime when Campbell Graham ran through a hole and scored under the posts to close the gap to two points. The Raiders held onto a 16-14 lead at halftime.

South Sydney picked up where they left off, showcasing their lethal left-edge attack with centre Dane Gagai scoring the first try of the second half. Reynolds converted to give the visitors a 20-16 lead.

Alex Johnston scored his second try of the night in the left corner to extend the Rabbitohs lead by 10 with just over 20 minutes remaining. Souths led 26-16.

Raiders hit back at the right time, with centre Curtis Scott setting up his winger Jordan Rapana for his second try of the evening. The match becomes a two-score game with Souths holding onto a 32-20 lead with 12 minutes remaining.

Rabbitohs forward Jacob Host was sin binned in the 73rd minute for holding a player down in a try-scoring opportunity.

Raiders five-eighth Jack Wighton was denied two pivotal tries in the space of four minutes due to obstruction.

The Rabbitohs were awarded a penalty in the final minutes where they elected to take the shot at goal. Reynolds converted to come out victorious 34-20 over the Raiders. 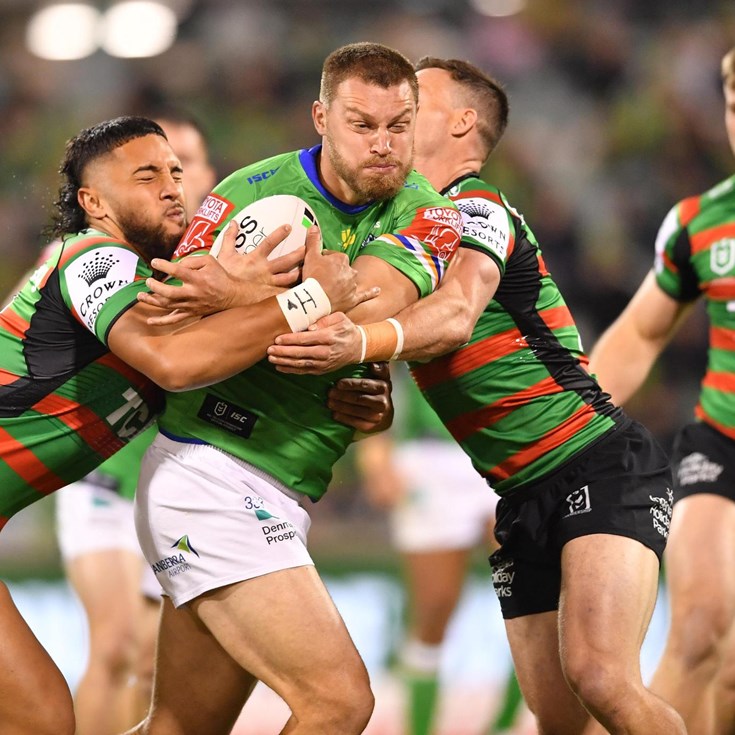