The Queanbeyan Kangaroos and Tuggeranong Bushrangers both caused upsets in round eight of the Canberra Raiders Cup.

The Queanbeyan Kangaroos caused a big upset with a 44 point victory over the Gungahlin Bulls at Gungahlin Enclosed Oval.

Coming off a bye last week, the Roos came into the game with plenty of energy in attack and defence. They scored an impressive 40 points in the first half, overpowering the Bulls outfit across the park.

Gungahlin opened the scoring in the second minute, with fullback Tristan Eldridge bursting through some defence to score.

But from there it was all the Roos, with the side running in 12 tries.

Sione Vuki, Adam Barlow and Alifelti Ngahe were the other try-scorers for the Roos, with hooker Lachlan Ingram kicking eight goals.

Bulls centre Deakin Bright and five-eighth Tre Holten-Williams scored for the home side.

The loss sees the Bulls undefeated start to the season come to an end, while the Roos recorded their third win of the competition.

The Roos are now in in fifth place on the ladder, with the Bulls still in first place.

The Goulburn City Bulldogs notched up their second straight win with a strong victory over the Yass Magpies at Walker Park.

Goulburn held off a late Yass comeback to claim the two-points.

The Bulldogs started the game well, jumping out to a 16-0 lead after two tries to lock Tyson Greenwood and one to fullback Dominic Stephens.

Yass got one try back through Jayden Clarkson, but Goulburn bounced straight back with Jesse Martin shrugging off a couple of defenders to plant the ball over the try-line. The Bulldogs went into half-time with a 20-4 lead.

Yass forward Caleb Esera scored just after the break, to bring the score to 20-12.

But Goulburn skipped further ahead after centre Dillon Rota scored, and Greenwood picked up his third try of the afternoon.

Magpies centre Brendon Housden got the home side to within 12 points, but the Goulburn defence proved too good. Thomas Croker scored the final try of the day for the Bulldogs.

The win sees the Goulburn City Bulldogs jump into third place on the ladder, one point ahead on West Belconnen.

The Belconnen United Sharks continued their strong momentum with a dominant win over the Woden Valley Rams at NSWRL HQ Bruce.

The Sharks have now recorded three straight wins, with the side impressive in attack.

Belconnen United centre Manase Kaho finished the game with a four try haul, with his speed up the middle proving a headache for the Rams.

Campbell Woolnough and John Papalii were the other try scorers for the Sharks.

The Sharks had to come from behind to claim victory, with the Rams scoring the opening two tries of the game thanks to Aiden Kawira and Thomas Scrivener.

The Sharks currently sit in sixth place on the ladder, equal with the Queanbeyan Roos and Tuggeranong Bushrangers.

The Tuggeranong Bushrangers caused another upset with a tight two-point win over the West Belconnen Warriors at Raiders Belconnen on Sunday.

Despite playing with 12 men after losing a player midway through the first half, the Bushrangers showed a lot of determination to overcome a strong West Belconnen outfit.

Tuggeranong lead 24-12 with ten minutes to go, before Warriors winger Mapu Uasi scored in the corner, setting up a grandstand finish.

West Belconnen prop Timothy Sloman scored in the final minute of the game, making it 24-22, but it wasn't enough as the Bushrangers held on for the win.

Earlier, the Warriors jumped out to an early 10-0 lead, with tries to Sloman and fullback Brandon Withers.

The Bushrangers are now in seventh place on the ladder, while the Warriors have slipped to fourth. 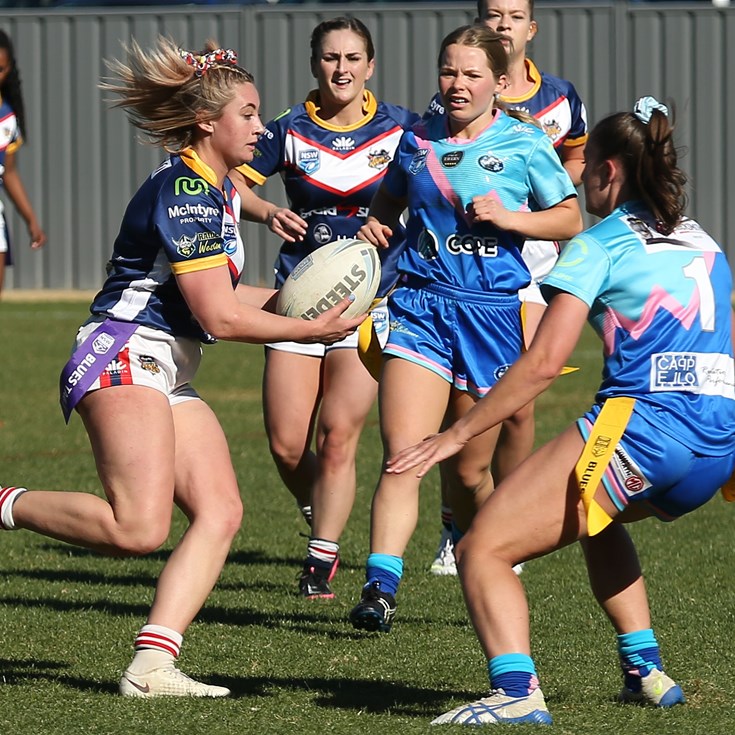