The Canberra Raiders have showcased an impressive second-half display to defeat the Cronulla Sharks 34-18 at Cbus Super Stadium on Saturday night.

This Canberra win is pivotal for the Raiders season, posting back-to-back wins towards a late finals run.

The Raiders earned themselves some early field position in the opening minutes through backing up and taking advantage of some broken play. This led to the first try of the night through great adlib play.

Backrower Corey Harawira-Naera offloaded a ball to Xavier Savage close to the line who found winger Jordan Rapana to cross for the first try of the night. Sharks five-eighth Braydon Trindall was placed on-report for high contact on Rapana when he was grounding the ball, which constituted an eight-point try. Jarrod Croker converted both goals to hand the Raiders an early 8-0 lead.

Raiders five-eighth Jack Wighton finished off a perfect set following their first try through grubber kicking for himself and forcing a goal-line dropout.

Hudson Young was caught with a head-high tackle close to the Sharks goal-line. The Raiders elected to take the shot at goal where Jarrod Croker made no mistake, extending the Canberra lead to 10-0 after 20 minutes.

The momentum shifted after the Sharks received back-to-back sets through some ill-discipline from Canberra. Cronulla centre Jesse Ramien drifted back inside where he beat multiple defenders to score the Sharks first try of the night. Trindall converted to trail the Raiders 10-6.

The Sharks piled on another try through Sione Katoa who received a beautiful pass from fullback William Kennedy. Trindall converted to gain the Sharks first lead of the night, 12-10 with under ten minutes remaining.

The Raiders were gifted a penalty right on halftime in-which captain Jarrod Croker elected to take a shot at goal. Croker converted his fourth goal of the night to tie the scores 12-all at halftime.

The Sharks answered straight back through a beautiful cut-out pass from Trindall found winger Ronaldo Mulitalo who finished off another Cronulla try. Trindall converted from the sideline to re-gain a 18-16 lead over the Raiders.

The match entered an arm-wrestle between both sides, trading attacking sets at one another but goal-line defence proving superior.

Canberra backrower Hudson Young broke the deadlock to cross for a try with 15 minutes remaining. Sam Williams held the defence up and played a short ball to Young who raced away untouched to score under the posts. Croker converted to go-up 22-18 over the Sharks.

The Raiders piled on another try to close-out the game when they chased through a Sam Williams kick to force an error. Harawira-Naera cleaned up the ball and passed to an unmarked Sebastian Kris who gifted Xavier Savage his first NRL try. Croker converted to take a ten-point lead with under 5 minutes remaining.

Raider’s winger Semi Valemei claimed a try right on fulltime after he cleaned up a Cronulla error to race away to score. Croker put the icing on the cake and converted the extra’s to go out victorious 34-18 over the Sharks. 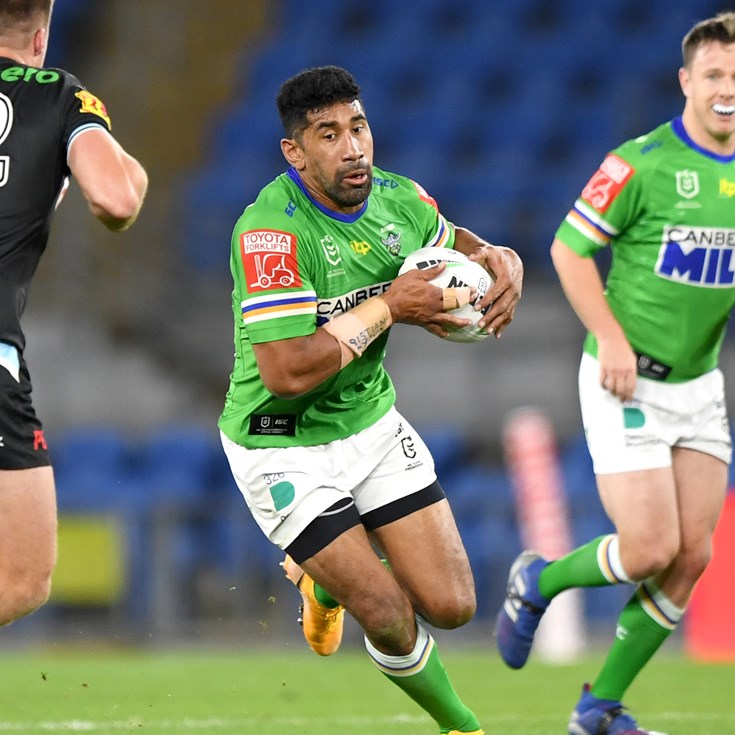 Presented By Canberra Imaging 2 weeks ago
08:34

Presented By Specsavers 2 weeks ago

Presented By Specsavers 2 weeks ago