40 years in the limelight. Six Grand Final appearances. Three Premiership Titles – 1989, 1990 and 1994. Generations of iconic players and moments. Decades of loyal members and fans. The Canberra Raiders represent the Region. They give back to the community that gives so much to them. They grow Rugby League from grassroots to elite teams. Just as the Viking Clap unites our fans, the Raiders Spirit lives on…

“The celebration of forty years of elite rugby league in the Capital is no mean feat. Our real passion at Underground is to uncover local stories and share these stories by setting them to a flavour and capturing it all inside a bottle of a gin. We enjoyed collaborating with the Raiders and exploring their stories from the past 40 years, with a quest to produce something new, different, unchartered and exciting,” said Underground Spirits’ CEO, Claudia Roughley.

“Over the past few months we’ve learnt so much about the Raiders and what stories they sought to tell through the anniversary gin. Encouraging them to think about many aspects of the anniversary, we explored their imagery, really understanding the relationship between the history of the club, and the local landscapes which the team has played upon for decades. These are the Raiders’ stories to share.

“Raiders Spirit anniversary gin has been created using ingredients that are both meaningful to the club’s history, and that have produced an incredible flavourful gin,” Claudia continued. 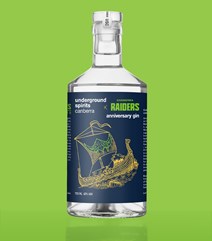 The gin recipe incorporates lime. Lime is synonymous with The Raiders. The jerseys, the chants for The Green Machine. Native limes are uniquely Australian, wear their luminous green on the outside, and are bursting with high energy and intensity, just like the Raiders. Three different types of lime have been used in this gin, Desert Lime, Dooja Lime and Finger Lime – triple premierships in the Raiders’ history, triple the lime.

Other botanicals included are the Canberra Bell, the Correa, a native hybrid flower grown for the Canberra Centenary featuring nectar-rich tubular flowers, and Strawberry Gum, representing Eucalypt trees which are an icon of the bush capital, with many species abundant throughout Raiders’ territory. They’re towering trees, signifying strength and protection.

“This is another unique way to commemorate our 40th anniversary celebrations and provide our members and fans with a keepsake,” said Don Furner, CEO Canberra Raiders.

“The Raiders have enjoyed the opportunity to collaborate with local company Underground Spirits to develop the 40th Anniversary gin,” he continued.

Raiders Spirit is a Limited Edition and is available to purchase from Underground Spirits online, with pre-orders available from today. Orders to commence shipping Monday 16th May 2022.

“Producing a gin for the 40th Anniversary of The Canberra Raiders is an occasion to demonstrate the memorable history of the club, and to lead with our distilling expertise to craft a spirit specially individual for members and supporters to share and enjoy during this celebration year.

“Every year of the forty to date they display their passion and love of the game and perpetuate that into inspiration. This is the chance for club members and fans to engage with the gin, savour the flavour, recall the stories, and make a start on the next forty years of memories. Cheers to that!” Claudia concluded.

For more information and to pre-order visit www.undergroundspirits.com.au

The outstanding athleticism of Xavier Savage