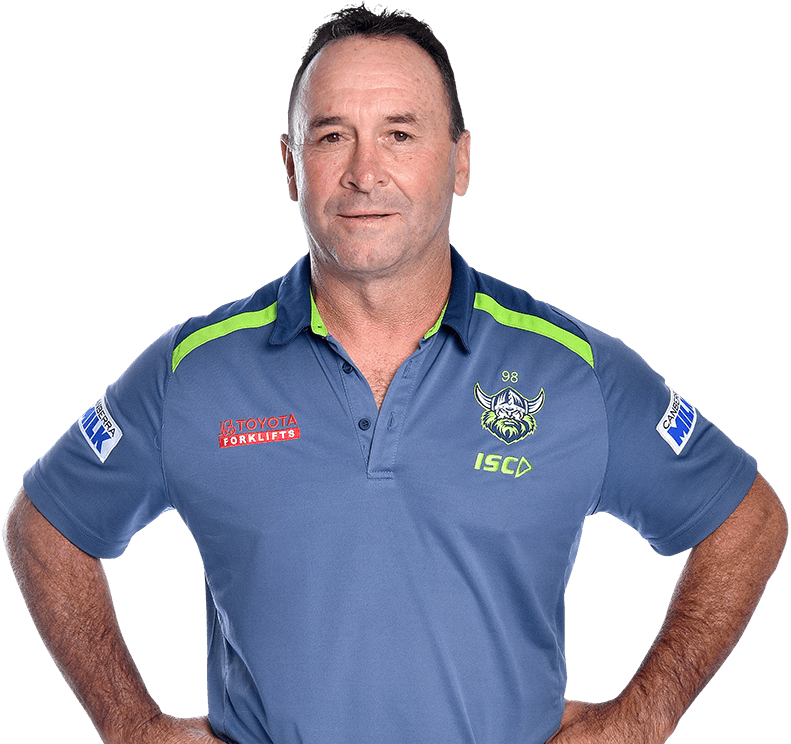 Canberra Raiders Coach Ricky Stuart has had a long and decorated career as both a rugby league player, Coach and in recent years as Director of the Ricky Stuart Foundation.

During an illustrious NRL career between 1988-2000, Stuart won three premierships with the Raiders in 1989, 1990 and 1994, represented his state NSW 14 times and Australia in nine Test matches.

Stuart began his sporting career playing rugby union at St Edmunds College in Canberra and the Queanbeyan Whites, when he was selected for a Wallabies tour of Argentina in 1987.

In 1988 Stuart switched codes to rugby league, where he soon developed into one of the game's best halfbacks, achieving immediate success with the Raiders and helping them towards their first premiership in 1989, where they won in extra time over the Balmain Tigers in what has been dubbed one of the greatest grand finals of all time.

In 1990 Stuart once again helped the Raiders as they secured back to back premierships, with Stuart awarded the prestigious Clive Churchill Medal for a man of the match performance in the grand final win over the Panthers.

Stuart was awarded the Rothmans Medal in 1993 for the best player in the competition and also picked up the award for Raiders player of the year in 1992 and 1993.

His career in Canberra finished at the end of the 1998 season, where he reached his 200th match for the club. He went on to play two seasons at Canterbury in 1999-2000 before retiring from the game.

Stuart began his Coaching career in 2001 with immediate success, taking the Bulldogs Jersey Flegg team to a premiership in his debut season as a Coach.

He then transferred this form into NRL success, winning a premiership in his maiden season with the Sydney Roosters in his debut season as an NRL Coach.

Stuart coached the Roosters from 2002-2006 before moving to Cronulla where he coached the Sharks from 2007-2010. In 2013 Stuart took up a position with the Parramatta Eels for one season, before joining the Raiders at the start of 2014 where he is currently the Coach of the club. In 2016 Stuart guided the Raiders to second place on the ladder and the Preliminary finals.

Stuart has also coached at representative level during his coaching career, coaching the NSW Blues in three series, including a series win in 2005. He also coached the Kangaroos between 2006-2008 and was at the helm during the 2008 Rugby League World Cup.

Away from Rugby League Stuart has been a very active member of the community through the Ricky Stuart Foundation, which was established in 2011 to raise money and awareness for families dealing with autism.

The Foundation has been successful in establishing Ricky Stuart House in Chifley in Canberra, a respite centre for children to support families affected by autism. In 2018, a second house was opened for teenagers in the suburb of Cook.

In July 2018, Stuart was inducted into the NRL Hall of Fame.

Ricky Stuart on his relationship with Craig Bellamy