For the first time in a number of years the Raiders head into the season with some depth in the position of hooker due to the strong possibility of Josh McCrone reverting to the role, the signing of Kurt Baptiste and the emergence of Mitch Cronin.

Despite the excitement surrounding Josh McCrone’s possible shift to the hooking role, Glen Buttriss’ name should not be forgotten.

Buttriss possesses a quick pass from dummy half coupled with a marvellous sleight of hand which enables his side’s forwards to get on a role and his halves the necessary space to create havoc for opposition defensive structures.

The Cootamundra Bulldogs junior is also tenacious and tough in defence, averaging 26.4 tackles in 2013.

The aforementioned traits resulted in the 28 year old being re-signed with the Raiders until the end of 2015.

Unfortunately, injury hampered Glen Buttriss’ campaign in 2013. The wily hooker will look to put his injury woes behind him in 2014 and reaffirm his standing as the premier hooker at the club.

Of course the biggest threat to Buttriss’ aspirations to start at hooker lies in the possibility of McCrone switching to the number nine jersey on a fulltime basis.

McCrone was ultra-impressive when he was shifted from the halves to hooker last year. His speed, playmaking ability, vision and kicking game added a different dimension to the Raiders attack out of dummy half and he has been noticeably impressive in the role during pre-season training.

The 26 year old was also impressive when playing hooker for the Country Origin team last year and a permanent switch to the role may lead to further representative honours as it would prove his versatility.

The possibility of McCrone playing hooker on a permanent basis in 2014 obviously revolves around how well he adapts to the role fulltime as well as the form of the other hookers in the squad.

McIlwrick’s dynamic running game out of dummy half coupled with his resolute defence will see him apply plenty of pressure on Buttriss and McCrone.

Whilst McIlwrick hasn’t started regularly in the position he has spent plenty of time in the role coming off the interchange bench.

McIlwrick has been injected late in the half where his explosive bursts of speed out of dummy half and energy in defence would often lift the tempo of the match in favour of the Green Machine.

The former Junior Kiwi representative is known for being one of the fittest members of the squad and one of the strongest pound for pound. McIlwrick has again led the way in pre-season testing measures and will again head into the trials in stellar condition.

McIlwrick’s ability to slot into the back-row will also enhance his chances of being included in Ricky Stuart’s top 17.

Baptiste is a new signing for the Raiders who arrived in the Nation’s Capital from the Brisbane Broncos.

After making his debut for the Broncos in 2011, Baptiste went onto play in five NRL matches and arrives in Canberra in search of a more regular first grade opportunity.

Whilst there is still plenty of competition at the Raiders, the 22 year old has been very impressive during the pre-season ball work sessions.

Baptiste is lightning quick off the mark and reads the play very well from the ruck area. His decision making in regards to when to run is first class and he creates multiple opportunities for his support players.

The upcoming trials are a prime opportunity for Baptiste to impress the coaching staff and his new team mates to ensure that he is well in contention for a first grade spot in 2014.

Whilst Cronin may be relatively unknown to Raiders fans, the talented prospect has the coaching staff eager to see how far he will develop in 2014.

The greatest string to Cronin’s bow is his versatility. The 21 year old is able to play fullback, five-eighth or hooker with ease.

It is at hooker though where the coaching staff sees Cronin’s future.

He gained some experience in the position last year in the NSW Cup and his sublime ball skills, evasive running game and underrated toughness in defence saw him consistently among Mounties best.

Cronin is expected to start the year in the Queensland Cup with Souths Logan however if his form warrants selection, his versatility may see him selected by Stuart in first grade at some stage throughout the year where he will make a handy addition off the bench. 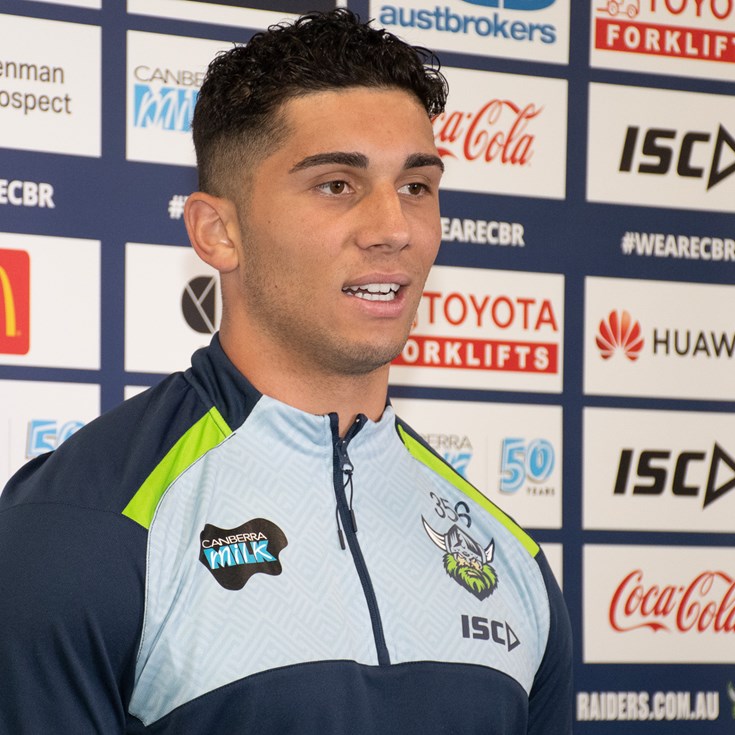 Presented By Complete Cut 3 hours ago
85