When Canberra Raiders’ players come up against problems in life that even they fear to tackle, they seek out someone who has been a permanent fixture at the club for almost three decades – team chaplain, Mgr John Woods.

The Vicar-General of the Archdiocese of Canberra and Goulburn has filled the voluntary role of club chaplain since 1986, when sports chaplaincy was a new, novel idea for many in Australia.

Raiders front rower Dane Tilse has known Mgr Woods since joining the Raiders in 2006, and says he appreciates the spiritual support.

“A lot of the boys are of different faiths in the team, but that doesn’t really matter, Father John’s always there for a yarn if you’re having a few issues,” he says. “I know in the past I’ve been to see him personally and I got a fair bit out of that.”

Even for those who are relatively new to the club, such as Joel Edwards, the high regard Mgr Woods is held in becomes apparent very quickly.

“He’s a great guy, and he’s always someone you can vent to or have a chat with,” he says. “You look at him and you don’t think he’s a priest, he’s just one of your mates, someone you can talk to.”

Mgr Woods says the players and staff often speak to him spontaneously, in a variety of environments, and always with respect for his role.

Attending training sessions with the players has been a constant for Mgr Woods, and it’s where he interacts most with the group. 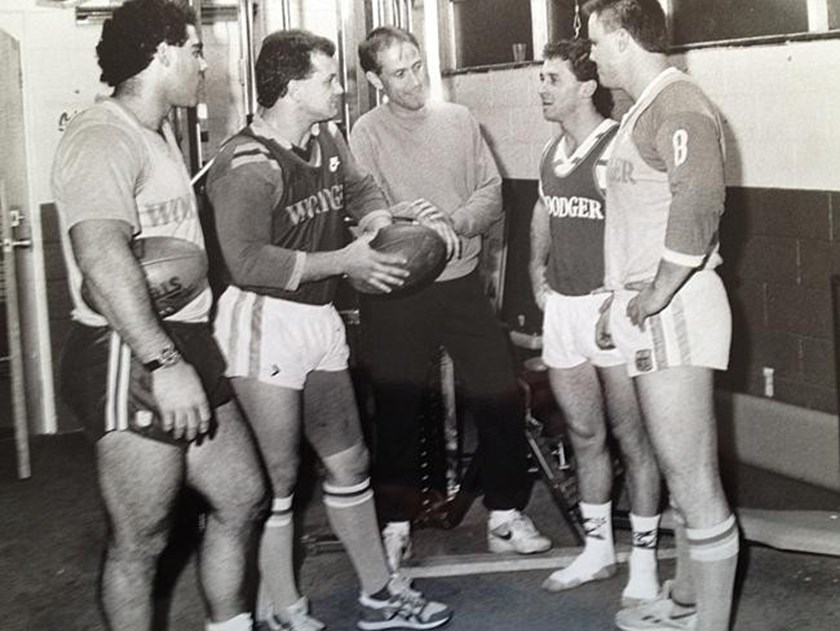 “I was 32 or 33 [when I started], so I joined in the training that I could, and I think doing that gained a respect,” he says. “On occasion guys would chat, but it was, and always will be, just low-key footy life, incidental talk. But every now and then it’s given rise to more serious reflections.”

Although he loves being involved, Mgr Woods admits the role has its challenges, the biggest of which is simply time.

“One of the biggest challenges is fitting it in, but there’s also an awareness that with more time you could do more,” he says.

With this year’s social justice statement focusing on the role of sport in society, Mgr Woods believes now is the perfect time for the Church to increase its engagement with Australia’s sporting communities.

“[Sport] is the largest subculture in Australia, and I would like to think this year’s social justice statement might be an impetus to more serious, systemic reflection, even a prophetic voice affirming that which is good about sport, and perhaps at times making comment on that which is dehumanising, and in so doing, engage with society,” he says.

Presented By IRSO Recruitment 13 hours ago