As Croker enters his first season as Captain of the Canberra Raiders, he also approaches several outstanding career accomplishments, both of which are highly achievable.

Currently on 140 career games, Croker is just 10 matches away from reaching his 150th NRL match, all of which have been played for the Green Machine.

Playing 150 NRL games all before your 25th birthday is a fantastic effort and a true testament to Croker’s durability and underrated toughness. Since his debut in 2009, Croker has never played under 21 games in a season and has evolved into a prominent feature of the side on the left edge.

Last year, in a season in which the Raiders failed to make it through to the semi-finals, Croker amassed an impressive 202 points. This feat saw him overtake club legend Mal Meninga into third place on Canberra’s all-time point-scorers list, and a lesser effort of 160 in 2015 would see him leapfrog Clinton Schifcofske into second on that prestigious list behind Croker’s first NRL Coach, David Furner.

By leapfrogging Schifcofske, Croker would in turn reach his 1000th career point. The Goulburn Stockmen junior needs just 108 points to reach this milestone and given that Croker hasn’t scored under 126 points since 2010, it appears highly likely Croker will do so.

Since arriving in the Nation’s Capital via the Newcastle Knights in 2013, Joel Edwards has proven to be a valuable and consistent contributor.

In his two years at the club, Edwards has averaged over 21 games per season, and despite the serious pain he inflicts on the opposition the Cessnock junior has remained relatively injury free.

As such, Edwards, currently on 43 matches for the Raiders, will reach his 50th game for the club next year. The hard-hitting back-rower is also likely to play his 100th career match in the NRL given that he is currently on 88 games.

The ultra-competitive Josh McCrone is the most durable player at the club having not missed a game in four years and has played his heart out for his beloved Raiders on each occasion.

The 26 year old is currently on 129 matches and if his proven durability comes to the fore again in 2015, McCrone will reach the 150th game of his career in 2015, all of which have been played for the Green Machine.

Papalii once again confirmed his standing as one of the best young forwards in the world in 2014, and the Raiders premier back-rower.

The Logan Brothers junior is one of the first players chosen for the Raiders and a regular member of the Queensland and Australian representative sides.

Aside from his representative accomplishments, Papalii has also amassed 80 NRL games and is primed to reach his 100th match for the Raiders in 2015.

Shillington has enjoyed a hugely successful career to date in the club, state and international arena, and he is set to achieve another landmark in 2015; his 200th NRL match.

The 31 year old is just 11 matches away from the 200 game mark after playing in 189 matches for the Sydney Roosters and the Raiders since his debut back in 2005.

After compiling 95 games for St Helens in his five year stint in the English Super League, new recruit Iosia Soliola is eyeing off his 100th match in the NRL after previously playing in 92 games for the Sydney Roosters between 2005-09.

Interestingly, all of Soliola’s 100 matches in the NRL would have been served under Coach Ricky Stuart.

Currently on 282 career matches, Stuart approaches his 300th game as coach, 13 years after taking over the reins at the Sydney Roosters.

Stuart is also 11 matches away from his 150th win as coach.

Tilse, the club’s most capped current player, will become just the 10th player to play in 200 matches for the Green Machine if he plays in a meagre five occasions in 2015.

Due to his three appearances for the Newcastle Knights in 2004 before joining the Raiders in 2006, Tilse will reach his 200th career match just two matches into the season.

If selected for the opening two games of the season, Tilse will achieve the feat against the New Zealand Warriors in front of his home crowd. No doubt Tilse’s father Mick, a foundation Raider, will be there to cheer his son on.

Alternating between the starting side and the interchange bench, Tilse was an honest toiler for the Green Machine in every match last season. If he is to replicate a similar feat in 2015, Tilse will overtake names such as Furner, Stuart and O’Sullivan on the list of most first grade games for the club.

Presently situated on 75 games, if Bill Tupou is to play in the majority of matches this year for the Raiders, he will reach his 100th match in the NRL.

Based on his tremendous season in 2014, Vaughan, the self-dubbed Italian Stallion, is almost certain to be a part of Canberra’s top 17 in 2015.

In just his second year of first grade, Vaughan evolved into an integral member of Ricky Stuart’s top 17 and as he famously proved against the Melbourne Storm at GIO Stadium, a match-winner.

Currently on 41 career games, the Country Origin representative is in line to play his 50th match for the Raiders in 2015.

Having scored 18 tries with the Melbourne Storm last year, Raiders fans will be hoping that new recruit Sisa Waqa scores the seven tries he needs to reach 50 career tries with ease.

If selection goes his way and injuries are kept at bay, Wighton will achieve the feat in Round 3 in the annual blockbuster against the St George Illawarra Dragons at GIO Stadium.

If he is to win the halfback dual with Mitch Cornish, the returning Sam Williams is in line to play his 50th NRL match in lime green this year given that he has already played for the Raiders on 42 occasions. 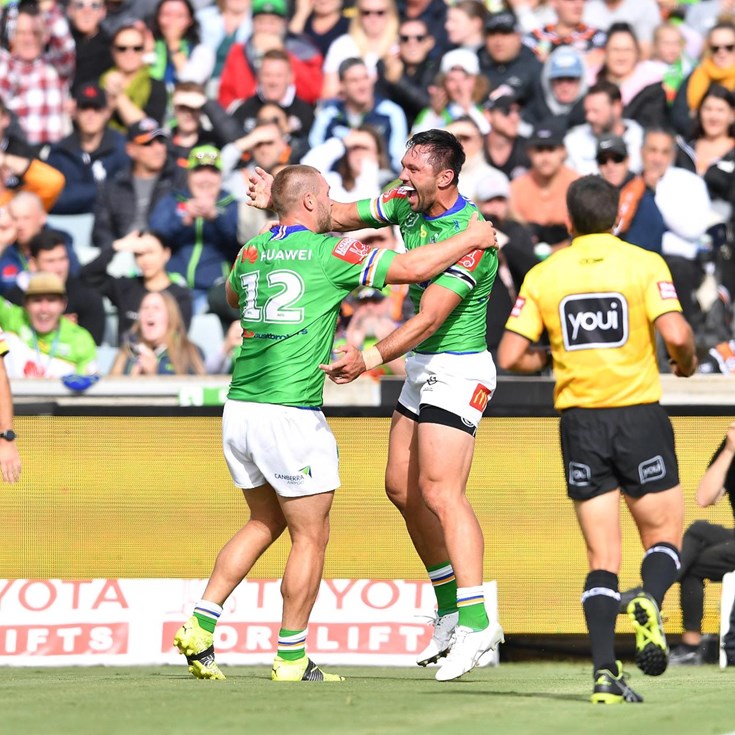