Plagued by inconsistency in 2017, the Canberra Raiders will be hopeful of performing better this season. In the pre-season, however, they were dealt a cruel blow, when Josh Hodgson injured his ACL while playing for England at the Rugby League World Cup.

Although they have an easy draw to start the year, the Raiders' inconsistencies in previous seasons means that they cannot take any game for granted in 2018.

Yet again, all eyes will be on the Raiders right side attacking duo of Joseph Leilua and Jordan Rapana, or, as the fans have called them, 'Leipana.' The duo are one of the most potent centre/wing pairings in the NRL with Rapana in particular an elite winger in the game after successive consistent seasons.

If the Raiders can manage to find a way to win the gritty, determined contests that they lost so many of in 2017, they may have a chance of a finals berth. If they fail to do so, however, it could be another long season for the Raiders faithful.

Not much, technically speaking… from the 17 who played the Raiders last Telstra Premiership match in 2017 – the 32-6 loss to Melbourne Storm in round 26-14 should start in round 1 against the Gold Coast Titans. The exceptions are Dave Taylor (released), Kurt Baptiste (released) and Josh Hodgson (injured).

The England international's absence is a big change for coach Ricky Stuart - and something new for him to deal with. Coaches love their hookers – just ask Trent Robinson or Craig Bellamy, Wayne Bennett or Paul Green.

But the other change helps Stuart enormously – a shift in attitude. The team that finished 2nd on the ladder in 2016 and reached the preliminary finals, had a sharp fall in 2017 down to 10th.

"Last year, I didn’t have a lot of players pressuring each other. So it was harder for me to put my foot on their throat," Stuart told NRL.com.

"This year, we’ve got a little more depth and it’s always good to have competition."

"I never look too much into draws. You’ve got to play what you’ve got in front of you, whether you’re at home, in the heat, in the cold, or away," he said.

"You’ve got to take each week as it comes because you don’t know what lies ahead every weekend. So having a short-term focus is pretty important at the start of the year.

"For me, the focus will always be finding out the areas we can get better. The common denominator of losing close games and how we lost them (in 2017) was us – nothing but us. The players are all well aware of that.

"I’m really happy with that because I’m hoping I can fix ‘us’ rather than having things outside of my control."

The stat that gives hope

Stuart's men are highly dangerous close to their line. According to NRL.com Stats, the strike rate inside the attacking 20 metres by the Raiders in 2017 was 10.1%. This compares with the NRL average of 8.7% and the top-four clubs averaging 9.6%.

Only two clubs had two try scorers in the top eight for the season – Melbourne (Suliasi Vunivalu 1st, Josh Addo-Carr 5th) and the Raiders (Jordan Rapana 3rd, and Nic Cotric 7th). So it's always nice to know your side can score points regularly.

It can also be a comfort that so few personnel are tied up in Origin.

From 34 players across NSW and Queensland, the Raiders had just one involved in the 2017 campaign: Josh Papalii. Yet there are six internationals, who are not Kangaroos, making those talents available for the Green Machine through the taxing Origin period.

Okay, so it didn't help the Raiders a lot last year… they still missed the finals. And they might have more players picked in Origin this year.

But the Raiders have a round 13 bye before Origin I; the weekend off like all clubs for Origin II and they play the Canterbury-Bankstown Bulldogs in Round 17 before Origin III - with the opposition likely to be without the likes of Aaron Woods, David Klemmer, Josh Jackson on Blues duty.

What you need to know NRL Fantasy wise

Jordan Rapana ($726,000) is one of the game's elite Fantasy wingers, combining a penchant for tries with a knack for racking up tackle breaks. Jarrod Croker ($553,000) and Joey Leilua ($486,000) have been great Fantasy scorers in the past and may start the new season undervalued, while the hooker battle between Craig Garvey and Sivila Havili (both $228,000) should result in at least one of them being a Fantasy bargain.

Ricky Stuart would have lost more hair, and a few hours les sleep, over his No.9 position. From a healthy group of four in October last year – Hodgson, Baptiste, Adam Clydesdale and Erin Clark – he has none left.

Baptiste was released to Super League so the Raiders could comply with the salary cap, while Clydesdale suddenly announced his retirement and Clark decided he needed to go to New Zealand for personal reasons.

At least Ricky isn't going anywhere. He has three years left on his current deal (end of 2020).

It's a fair whack with 16 players off but it's a delicate dance when two of those are your starting halves – Blake Austin and Aidan Sezer. Then key members of both the leadership and  engine room in Josh Papalii, Sia Soliola and Junior Paulo are also off in 2018.

The Raiders have already started talks with Sezer and Paulo, who have the same manager.

Please see 'What's New' above to get a sense of what Hodgson not being there could do to the fluency of the Raiders play. The No.9 touches the ball the most in a game and when you think of those hookers who have won a premiership recently – Cameron Smith, Michael Ennis, Jake Granville – or even go back a few years to the likes of Danny Buderus, Steve Walters or Luke Priddis – then you understand what Canberra have lost. They have lost the type of hooker that can win a premiership. So up steps Havili and Garvey – no pressure, guys.

The other burning issue is losing the seemingly winnable matches. Or, to put it more bluntly, concentration.

Canberra endured six losses last season by four points or less; three by two points or less. How vital was salvaging just a couple of those games, when the Raiders missed the finals by four competition points?

"Our lapses in our games. We need to get rid of that. We’d switch off for a few minutes and they’ve scored tries against us," front rower Shannon Boyd told NRL.com.

"We had games when we were ahead 12 or 16 points and they’d end up beating us.

"We can’t have that. We’ve worked on a lot to do with that and maturity is one of those things. We’re still quite a young side.

"But now that everyone is up around the 40-plus games mark, with a few around the 100, then we’re getting more experience and that’s going to help us," Boyd said.

"You look at teams like Melbourne Storm and the Cowboys and other teams that go well and they’ve got a lot of older players with a lot of experience, a lot of leaders.

“We’re starting to get that here. And that will go a long way to making us a lot better, a lot more ruthless."

Scoring points hasn't been a problem. Last year Canberra was third behind Melbourne and Brisbane for tries.

"As much as we scored a lot of points, we leaked a lot of tries as well," said Dally M winger of the year, Jordan Rapana.

"And I can say honestly that this pre-season has been one of the toughest defensive pre-seasons I’ve had. We’re been working our hearts out," he told NRL.com.

"Our wrestling coach Steve Babic has been awesome for us though. He’s really got to the root of where we think our problem is. That was a big focus this pre-season – trying to fix up those areas."

Joey Leilua… Some might say, about time. With the Brad Fittler millet broom being put through the NSW Origin selection room – and a solid opening nine rounds from the 106kg centre – Leilua might find himself in the Blues jersey Stuart has been predicting.

Jarrod Croker ….skipper, damaging centre, goal-kicker, points record-breaker… that's enough right there…. But sneak a look now and then at Elliott Whitehead on Instagram. The boy from Bradford has a lot of fun.

"I want Raiders fans to know they are they are the bravest in the competition, as no team in Australia asks their fans to sit through the extreme weather ranges Canberra has – from 38 degrees in pre-season summer to minus-four in winter. And we love them for it." Raiders CEO Don Furner

Note: These club squads are subject to change. Each club is required to submit 29 of their official 30-man playing squad to the NRL by March 1. The final spot in theses rosters can remain free up until June 30. 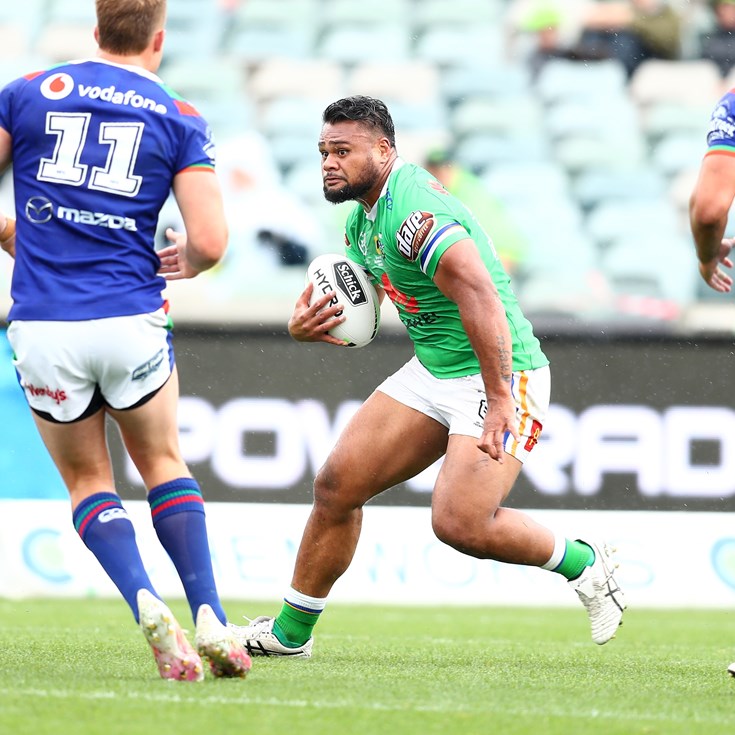