Three weeks into the season the signs are promising that Canberra can return to finals football, while North Queensland struggled badly last week with superstar forward Jason Taumalolo on the sidelines.

Canberra have two wins to their name – a 21-0 shutout of the Titans and a 17-10 defeat of Newcastle last week – either side of a tough loss at home to a strong Melbourne outfit.

Most encouraging for the Green Machine has been the form of two key recruits, with new fullback Charnze Nicoll-Klokstad and English forward John Bateman among their best this season – particularly in last week's victory over the Knights.

Meanwhile it's a case of one step forward, two steps back for the Cowboys, who started the season strongly against the Dragons before heavy defeats against Brisbane and Cronulla.

The absence of the injured Taumalolo was felt in both those matches but the real damage was done last week at the start of the second half – the period of the game when he is usually perched on the bench.

Defence is the team's real worry – only the Bulldogs and Warriors have conceded more points through three rounds – and it's an area they must improve against a Canberra side known for its ability to find the tryline.

Cowboys: The Cowboys will start as named on Tuesday. No panic from Paul Green after last week’s loss to the Sharks with the same 17 players retained to face the Raiders in Townsville. Justin O'Neill and Shane Wright were cut an hour before kick-off, while Peter Hola and Enari Tuala were omitted from the extended squad on Friday.

Raiders: The Raiders are also 1-17. Not surprisingly, coach Ricky Stuart has stuck with the same team that got the job done against Newcastle last week. Aidan Sezer (stomach muscle) is expected to be available for selection in round five and it’ll be interesting to see if Stuart picks him at halfback ahead of Sam Williams. Bailey Simonsson and Jacob Collins were omitted on Friday afternoon, while JJ Collins and Joe Tapine were cut an hour before kick-off.

Jake Granville v Josh Hodgson. In the wake of the Cowboys' disappointing 2018 results there have been calls for Granville to lift his game to the standards he showed in 2015, when he was among the game's most destructive dummy-half runners. He ranked eighth for dummy-half runs last season but is up to first through three rounds this year, and is more vital than ever to North Queensland's chances as the second-most experienced member of the team's spine. Hodgson meanwhile is among rugby league's elite attacking No.9s, with a couple of try assists and three forced dropouts to his name already, and is doing twice as much kicking per game as he ever has in the NRL. If Granville's running game can match Hodgson's playmaking performance the Cowboys will be well in this contest.

For the Cowboys to win

It's all about defence. Last week against the Sharks they didn't have Taumalolo's destructive power up front but they got a lot of simple things right: they conceded fewer penalties than their opponents, made fewer errors, matched Cronulla's offloads, and had quicker player-the-balls. They finished with more possession than the Sharks, and yet were thumped 42-16. The problem was 33 missed tackles and six line breaks conceded, numbers that were pretty similar to their showing against Brisbane a week earlier (36 misses, seven line breaks). If they don't tighten things up without the ball they won't be in the contest.

Work over the Cowboys' big men, and test their edge defenders. Canberra's "small forward" revolution is working nicely so far, with Bateman and fellow Englishman John Sutton stepping up nicely after the departures of man mountains Junior Paulo and Shannon Boyd. Bateman's quick feet and aggression have more than made up for his relative lack of size, with the Raiders leading the competition for post-contact metres (1463) and ranking third in tackle breaks (108). Bateman and Joey Leilua were ruthless against Newcastle's edge defenders last week and will be out for more of the same against North Queensland's leaky defence.

The Cowboys need to find a bit of ball control. They need to win ugly and not try too much. Maybe the post-Thurston hoodoo is upon them now. For the Raiders, I think Josh Hodgson still isn’t firing at the moment even though he is playing reasonable football. If the Raiders forwards can match the Cowboys I think Hodgson will have a fair say in who wins this game. Raiders by 4

North Queensland are chancing their arm in attack more than they have in years. Paul Green's men ranked last in offloads in 2018 and finished in the bottom three in the league for offloads in each of the past five seasons. That's changed in 2019, with the Cowboys (37) currently ranked equal fourth, almost a quarter of the way to last year's total just three games into the season.

Hodgson may rank fourth in dummy-half runs this season but as a team the Raiders rank first, with Jordan Rapana, Jack Wighton and Nicoll-Klokstad all frequently taking the chance to test out ruck defences. They'll keep the likes of Matt Scott, Josh McGuire and Jordan McLean on their toes this week. 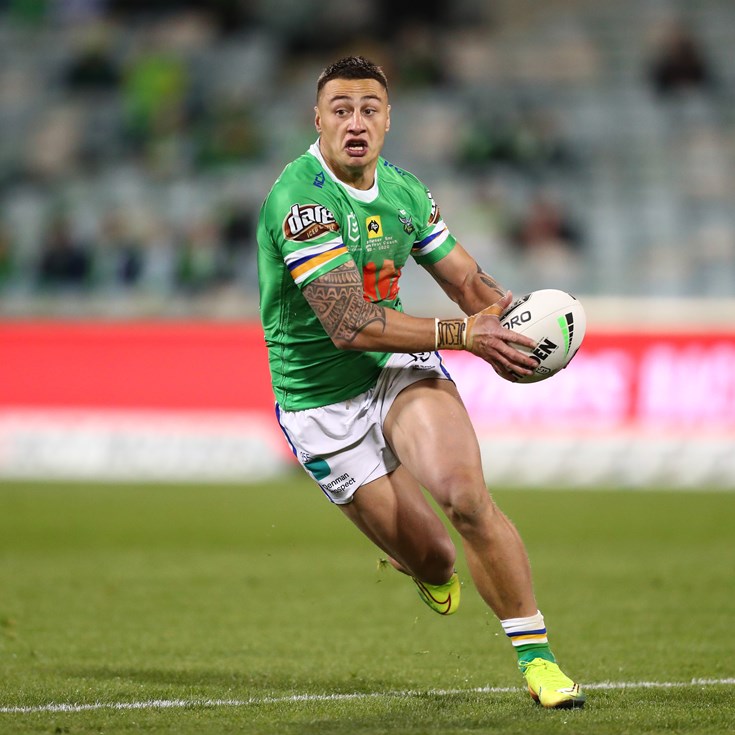