The Canberra Raiders have registered their first win of the season beating the Canterbury Bulldogs 26-10 in front of 11,800 fans at GIO Stadium.

In what was a massive defensive performance by the Raiders, who conceded 10 points and finished the game with 13 fit players after a number of injuries during the 80 minutes.

A chip over the top by Aidan Sezer found empty spaces on the five-minute mark with Michael Oldfield unable to gather the ball cleanly just short of the try line.

Ten minutes in and a Nick Cotric pass from inside his own ten metre line saw in Jordan Rapana racing down the touchline only to be stopped just short of the line.

The following play and Joey Leilua took advantage of a scrambled defensive line and managed to get over the try line.

In the chase on Rapana, Bulldogs winger Brett Morris was forced from the field for a HIA after falling heavily in which he failed to return for the remainder of the match.

Five minutes later and Leilua was over for his second with a pinpoint kick from Sezer being batted back by Rapana to his centre to cross in the corner.

Luke Bateman was taken off for a head injury assessment with just under 15 minutes to play in the half but returned shortly before half time.

Four minutes to play in the first half and the Raiders lost Ata Hinagno for the rest of the match after he came off second best in a Greg Eastwood hitup.

In the final minute of the first half, the Raiders lost another player for the match with winger Michael Oldfield failing to return in the second half following a head injury assessment.

Nine minutes into the second half and the Raiders should have had their third try with Elliott Whitehead putting a pass down from Cotric with the try line in sight.

The Bulldogs got their first try 12 minutes into the second half with Michael Lichaa putting Kieran Foran over the line from dummy half to reduce the gap to a converted try.

Midway through the second half and the Raiders lost a third player for the remainder with Sam Williams taken from the field on a medicab.

The following set of six and Aidan Sezer again turned provider with a perfectly placed chip over the line to find his captain Jarrod Croker who went over untouched under the posts.

A massive defensive effort saw the Raiders earn a repeat set of six and it was déjà vu in the set to follow with Sezer chipping for Croker to score in the corner.

An obstruction from the Bulldogs in their own half saw Jarrod Croker step up and extend the lead to 18 via a penalty goal.

A penalty with two minutes to play in the match saw Croker again step up and add the two points to extend the lead to 20.

A late consolation try to Josh Morris with the last play of the match saw the Raiders complete the 26-10 victory. 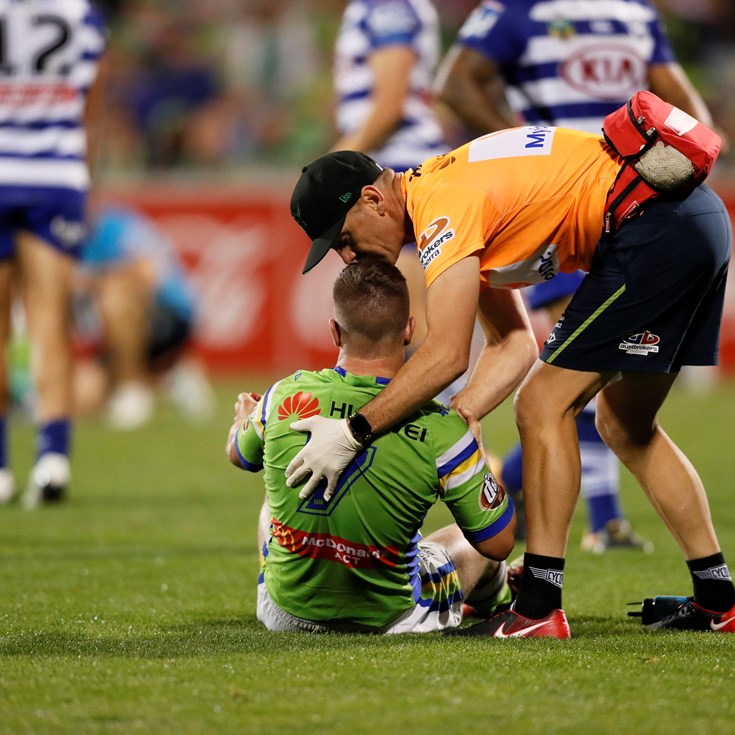 Behind the Limelight: Murchie, Guler and Les Gock