I don't have Panthers young gun Nathan Cleary in my NSW team for Origin I at the MCG but I reckon he should be wearing the No.7 jersey for the next two games and many years after that.

All things being equal with injuries and form, Cleary is going to be there for the next 10 years.

But for me, Cameron Smith's retirement press conference on Tuesday told us everything we need to know about Origin. The Queensland captain, who has more experience in the interstate arena than anyone else in history, spoke about how draining each campaign can be.

For a 20-year-old halfback, it's unfair to bring him in off, at best, two weeks' game time and preparation, which starts this Thursday against his old man's Wests Tigers side.

Coming into this year's Holden State of Origin series is going to be the biggest challenge of his career. Give him the best preparation possible, because down off that debut and backing it up at club level is the true mark of an Origin player.

Let Cleary get full confidence back in his knee, the first serious injury of his career. Let him do that in Penrith colours, and give him the extra three weeks between Origins to get his head right around the challenge ahead of him.

There's no doubt he's up to it and is NSW's best option at halfback. If his form is scratchy when he makes his comeback from his knee injury and the game-one halves are the stars in a win over the Maroons, then maybe you don't pick Cleary in Origin II but I don't see that happening.

Cleary is all but ready to kick off his interstate career and if he's partnered with James Maloney, he will have the steady hand of the veteran five-eighth from his club combination to bring the best out of him.

Maloney deserves to see out the series as an in-form incumbent, but he needs to improve his defence. Queensland have targeted him and will do so again becayse he's missed more tackles (73) than anyone else in the Telstra Premiership this season.

Luke Keary should partner him in the halves for the series opener at the MCG. His performance against the Warriors pushed him past Blake Green for the No.6 jersey and he offers more with his running game.

Out wide I would only one retain incumbent - James Tedesco. The Blues need to strip right back, just like Queensland did well over a decade ago now, and back their youth and x-factor.

Tedesco still fits that mould, and has outplayed Tom Trbojevic over the past month. The Manly speedster was the toughest exclusion from my NSW team, as a big, fast body, he could handle Origin on his ear.

But I'm a firm believer in not playing your best out of position, and so Nick Cotric and Josh Addo-Carr are my specialist wingers.

Cotric has the size, speed and strength to bring you out of trouble and gives you a very safe option under the high ball at both ends. Addo-Carr is pure speed with the ability to break a game wide open - to think he was playing in the Intrust Super Premiership at the Tigers just three years ago shows just how far he's come in a short time.

Latrell Mitchell is that x-factor I mentioned earlier, and his strength makes him Origin ready - he can simply run over anyone in the game. Defensively, he does still have issues but if you play him on his natural left edge he would mark up on Will Chambers rather than Greg Inglis, and I'd back him to hold his own.

Euan Aitken is my tip to partner him on the right - he proved he can handle GI earlier this year. His form is as good as any centre in the NRL and with the one-on-one match-ups so important in Origin, I think he has the confidence to handle the Queensland champion again.

Up front, it's all about form for me. Reagan Campbell-Gillard is the best front-rower in the NRL, with Paul Vaughan right behind him. Those two are more than ready for this arena, and when you compare their form to guys like Matt Scott and Dylan Napa, I fancy the Blues chances there.

I think Damien Cook outplayed Cameron McInnes in South Sydney's win over the Dragons last week, and with his speed around the ruck and overall fitness, we don't need a second hooker on the bench.

My back row of Tyson Frizell, captain Boyd Cordner and Jake Trbojevic speak for themselves, and they are three of the players that can hold their heads highest from last year's series loss.

I'd give the bench utility spot to Tyrone Peachey. He can play anywhere in the line-up, even 20 minutes at hooker if needed, and is the type of eyes-up footy player Brad Fittler loves. Wind him up with 10 minutes to go before half-time and just let him loose against some tired forwards.

Fittler: It's a game changer

David Klemmer keeps a spot on the bench along with Jack de Belin – his hard-hitting defence would add plenty to the Blues middle and both he and Trbojevic can play a traditional front-rower's game if needed.

Provided Wade Graham is fit, I have him there at the MCG as well. His ball-playing and short kicking down the left edge offer a point of difference and the chance to give Cordner a breather – he doesn't necessarily have to play 80 minutes.

If Graham isn't right, Tariq Sims has earned a spot and will keep Queensland's playmakers on their toes.

Using the NRL App? Listen to the podcast here

Blues Out For Blood! 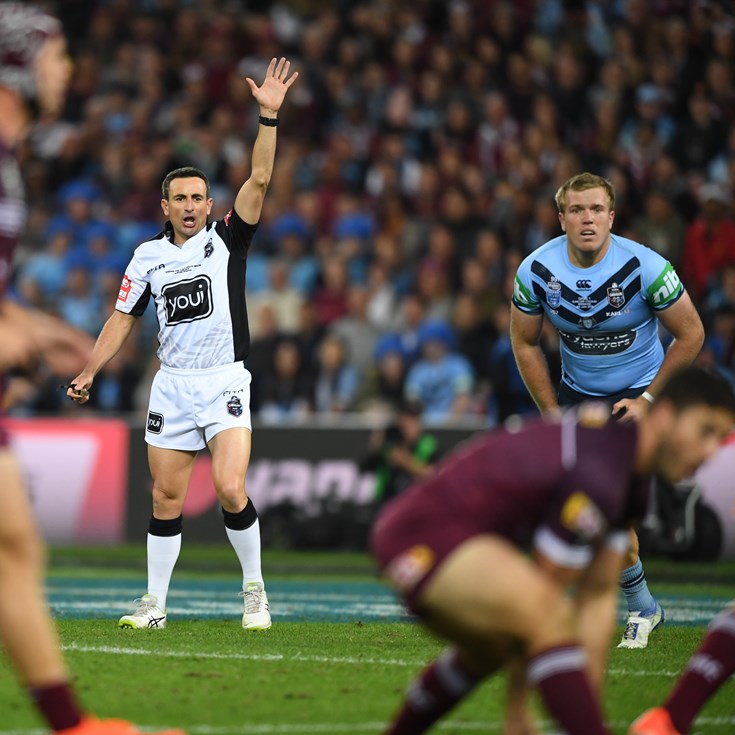 Top try-scorer of 2019: NRL.com experts have their say

Nick Cotric comes out on top in tackle break battle