The Canberra Raiders have gone down 23-22 to the Penrith Panthers at GIO Stadium on Friday night.

A field goal from Panthers halfback Nathan Cleary in the dying stages denied the Raiders the two points.

It wasn't the ideal start for the Raiders when centre Joey Leilua was forced off the field for a HIA in the second minute of the game in which he failed to return.

The Panthers were first to score within the first four minutes when James Maloney chipped over the line and the resulting kick allowing Tyrone Peachey to dive over in the corner.

Just minutes later and a penalty on the Raiders goal line allowed Maloney to extend the advantage to six with a penalty goal.

With ten minutes on the clock another penalty goal from Maloney saw the advantage extended the lead to eight.

A last tackle movement to the left and a lovely Blake Austin cut out ball found winger Nick Cotric who grabbed the Raiders first try 15 minutes in.

The Raiders went close with Jack Wighton breaking his way out of tackles and slamming the ball down just short of the line losing possession in the process.

Panthers forward Kaide Ellis was sent to the sin bin with six minutes remaining in the first stanza.

A Jordan Rapana 40/20 invited the Raiders into the attacking 20 and a penalty followed in which captain Jarrod Croker converted to level the scores at eight at half time.

The first points of the second half went Penrith's way with Maloney slotting his third penalty goal of the night.

A big Blake Austin tackle forced the ball free from Tyrone Peachey inside his own 20 metre line which was picked up by the Raiders and winger Jordan Rapana dived over underneath the posts to give the Raiders their first lead of the night.

Midway through the second half and the injury toll grew for the Raiders when Jordan Rapana was forced from the field with a hamstring injury.

A short side burst from the Raiders and a superb flick pass from Josh Papalii finding makeshift centre Elliott Whitehead who touched down in the corner with 17 minutes to play.

A simple back line movement to the left resulted in Peachey grabbing his second for the Panthers and reducing the gap to four with 13 minutes to play.

Just a minute later and the Raiders would extend their advantage to a converted try with another Croker penalty goal.

Some swift hands to the right hand side this time for Penrith saw Corey Harawira-Naera link up with Dean Whare to score in the corner and the Maloney conversion levelling the scores with four minutes to play.

Two minutes to play and halfback Nathan Cleary snatched the victory for the Panthers with a field goal from right in front. 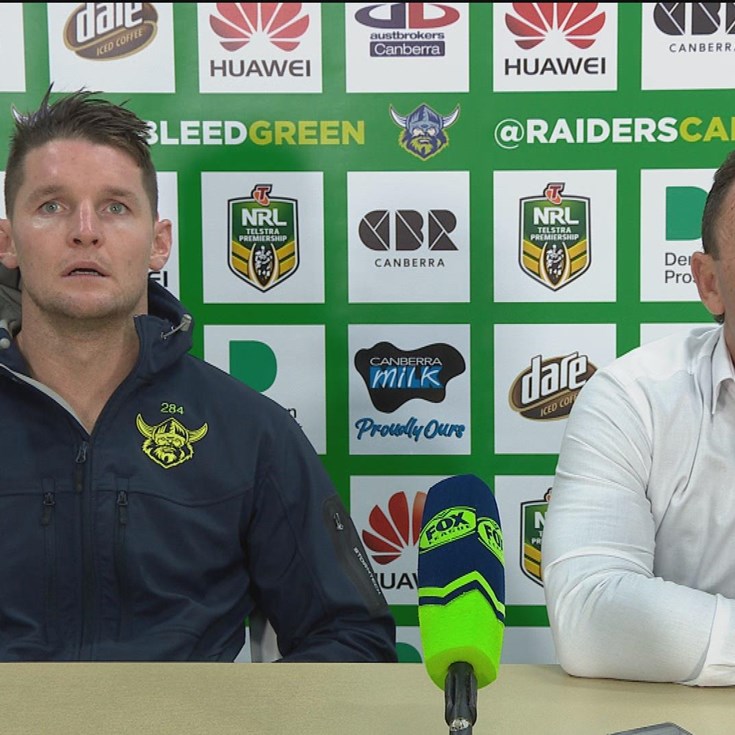 Round 14: The Final Word