The Raiders will line up for their final match of the 2018 season when they face the New Zealand Warriors at Mt Smart Stadium on Friday night.

Canberra have won four of their past five meetings against the Warriors and will be looking to finish the season with three consecutive wins for the first time this season.

The Raiders are coming off an impressive 24-12 victory over the South Sydney Rabbitohs in round 24 scoring 24 unanswered points to turn around the early deficit.

The Warriors will enter the clash full of confidence following their 36-16 win over the Penrith Panthers in round 24 seeing winger David Fusitu'a score a hat-trick and take his season tally to 21 tries.

Last time: The Warriors downed the Raiders 20-19 in the round 3 clash at GIO Stadium. The Raiders led 19-12 with four minutes remaining but an Isaac Luke try was converted by Shaun Johnson who then kicked back to back field goals in the final two minutes to sink the Raiders to their third consecutive loss.

Two of the brightest young wingers in the game will go head to head in what is sure to be an absolute belter of a matchup as the 19-year-old Cotric faces off with the 23-year-old Fusitu'a.

Cotric has faced the Warriors on three occasions and has the three tries to his name against them since his debut at the beginning of the 2017 season showing he knows how to get the better of Fusitu'a.

Fusitu'a leads the way this season on top of the try scorers list with 21 tries from as many appearances but has a lean run against the Raiders compared to other sides with just two tries from his five encounters against Canberra.

Expect these two superstars to demand a lot of ball to their flank with tries aplenty expected on the edges in this one.

Two of the smartest hooker's in the game will be out to dictate terms in the middle of the park and steer around two of the biggest forward packs in the game.

Hodgson has taken on the responsibility of the captaincy since Jarrod Croker was ruled out for the season and has led from the front getting involved heavily in attack and defence week in and week out.

Both players are the incumbent dummy-half for their nation and will be out to get one up over their rival come Friday ahead of a test match between the two later this year.

The battle between two Tongan internationals will be about more than this weekend as the race will heat up for a berth at centre for their country with a potential clash against Australia later this year.

Oldfield has been in tremendous form since filling in for injured captain Jarrod Croker at centre scoring six tries in his seven matches this season.

Kata has also had an impressive season featuring in 21 matches and grabbing himself 11 tries in the process and forming a lethal combination with Fusitu'a on the left edge.

The battle on this edge will be one not to be missed as two strong running centres come together on Friday night.

"It's going to be a massive occasion as they will want to get that home semi final and it's always a highly physica game against the Warriors." - Josh Hodgson.

Head to head: The Raiders and Warriors have faced off on 40 occasions with Canberra holding the advantage grabbing 21 victories and the Warriors winning the remaining 18 clashes between the two sides. 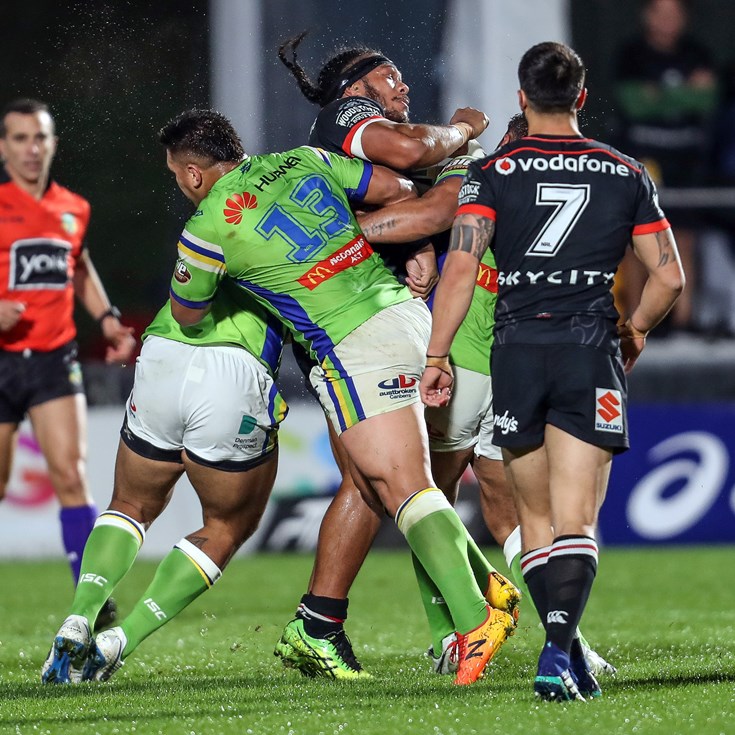