He is Canberra's all-time leading point-scorer and Jarrod Croker will add another feather to his cap when he captains the Raiders for the 100th time in Sunday's road clash with Manly.

At just 28, Croker has become one of the Raiders' elder statesmen and experienced all the club's highs and lows of the past 10 years.

Through it all, he has been as dependable as a metronome on Canberra's left edge and his goal-kicking prowess and ability to find the line have put him among the game's most prolific point-scorers.

After being named full-time captain at the start of the 2015 season, Croker said he's proud of his latest achievement but knows there are bigger team goals on Canberra's agenda in 2019.

"I was still pretty young then at only 24 and I think I have changed a lot since then," Croker said.

"I've definitely matured a lot and you can come a long way in four years.

"That was Ricky's (Stuart) first year as coach as well, so I have always said this and it's no disrespect to any other coaches, but I feel I have played by best footy under Stick and he's really got the best out of me."

The word maturity has been used a lot to describe the Raiders this season, especially in the wake of their come-from-behind victory over Brisbane last weekend.

Croker said an increased focus on player accountability means his job as one of the co-captains this year has been made slightly easier.

"We've worked hard on that but it just comes down to blokes maturing through life and age," he said.

Sia Soliola has witnessed the transformation of Croker first-hand from talented up-and-comer to seasoned professional.

"I was here when it was first announced and 100 games later, it's gone pretty quick but it couldn’t have happened to be a better bloke," Soliola said.

"If you wanted to know what the Canberra Raiders is all about, you open up the book and see him because he epitomises what this club is about.

"Jarrod's normally a quiet guy and as you can see how he's flourished and how he conducts himself.

Try of the Week: Round 6

"He's very professional but he's been that way ever since I've been here and he's someone who deserves all of the accolades and he's done so much in the game. He's still pretty young as well and he's still got a lot of football and growing to do which is kind of scary."

The only thing better than a milestone game is victory in one, and Croker believes the Raiders need to be at their best against the Sea Eagles.

"Manly at Brookie is always a very tough game. They were very unlucky last week and they've been playing some good footy," he said.

"They shift the ball and throw it around and I am sure it won't be any different this weekend.

Tackle of the week: Round 6

"We'll have to be at our best defensively again and worry about us and hopefully get the two points."

Manly are in the top five for not missing tackles, with only 25.7 a game compared to the worst performing side Penrith (41.7).

"We addressed that coming into this week and we understand the responsibility that we have in the middle," Soliola said.

"They've always had a good forward pack led by Marty (Taupau) and Addin (Fonua-Blake) but they'll be conducted by DCE and (Kane) Elgey so we can't be off our game." 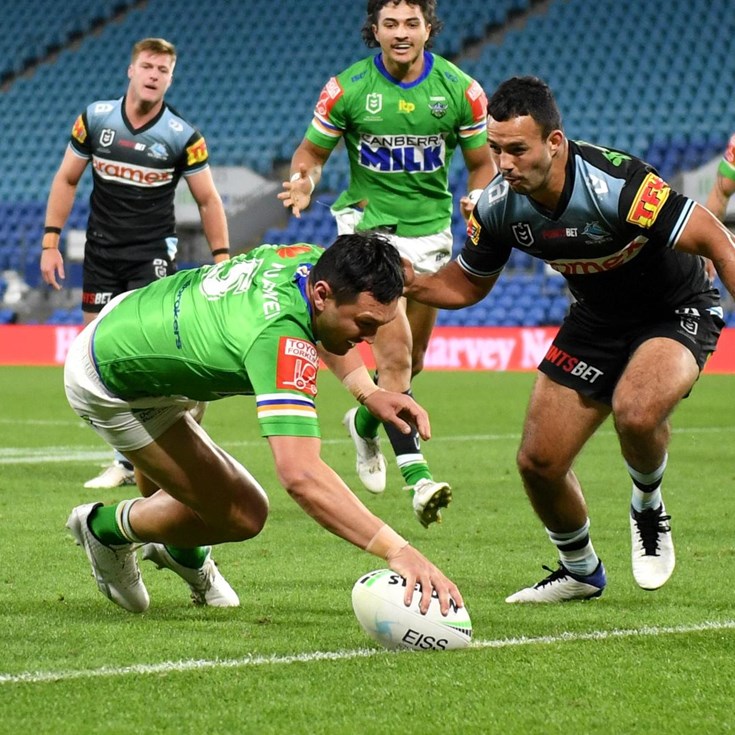 Presented By Blumers 5 days ago