The Canberra Raiders have suffered a narrow 22-18 loss to the Sydney Roosters in what was a close contest at GIO Stadium on Sunday afternoon.

The loss sours the festivities of Jarrod Croker’s 250th NRL match, who celebrated the milestone in front of 19,530 screaming fans.

Despite the loss, Jarrod Croker also ticked off another milestone during the match as well, notching up 1,000 career points at GIO Stadium.

The Raiders started the match on the back foot after James Tedesco broke through a gap before getting a ball off to Victor Radley to score.

Seven minutes later, a slick flick pass from John Bateman made it to the hands of Jordan Rapana, who dived across the try line to score the Raiders first points of the game.

The Raiders kept the momentum alive four minutes after, with the milestone man Jarrod Croker crossing over unscathed off a Josh Hodgson pass to put the Green Machine ahead.

The Roosters tied the game up again nine minutes later with a controversial try after Latrell Mitchell picked up a loose ball ten metres out from the line to barge his way over.

With seven minutes left in the half, a leaping Daniel Tupou plucked the ball from the air over Rapana and crossed untouched to put the Roosters back into the lead.

A last-ditch attempt from the Raiders saw a kick from John Bateman go straight to a Roosters player as the Green Machine headed to the sheds six points down.

Daniel Tupou got his second try of the afternoon, and the first of the second half, as he crossed in the corner to further Sydney’s lead.

With fifteen minutes remaining, Elliot Whitehead sparked hope into the Raiders fans after diving on a grubber kick from Hodgson to bring the margin back to only four points.

Within the last five minutes, Nick Cotric sparked up after two tackle busts, giving the Raiders a prime opportunity to score however the Roosters defence was holding on.

One final attempt from the Raiders eventually fizzled out into nothing as the Green Machine ultimately went down 22-18 to the Sydney Roosters at GIO Stadium. 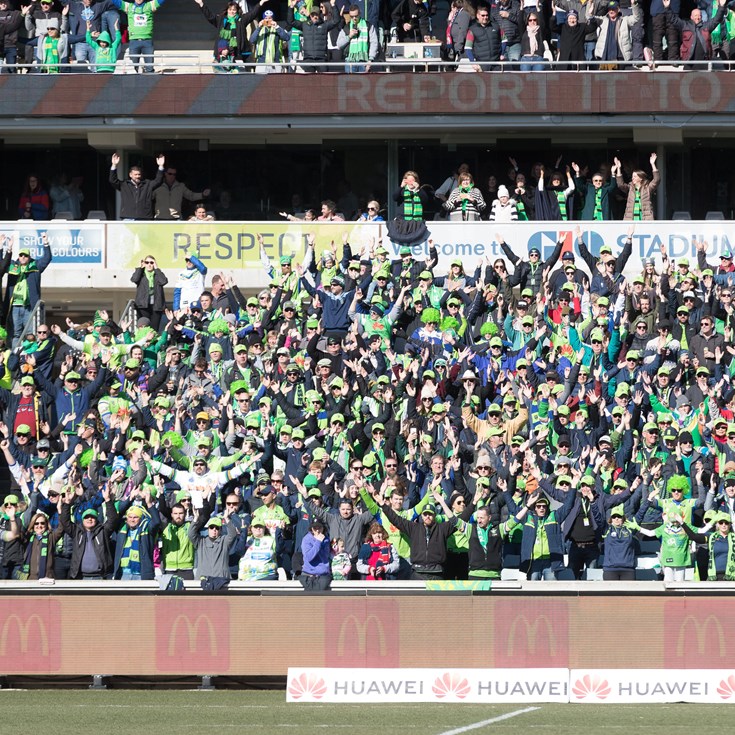 Around the ground: Raiders v Roosters