The Canberra Raiders will run out for their first Grand Final appearance since 1994 when they take on the Sydney Roosters in the 2019 Grand Final at ANZ Stadium this Sunday night.

The Raiders will be hoping to win the club’s fourth ever premiership, their first in 25 years, when they run out against the reigning premiers.

The Green Machine will be looking to re-create their emphatic victory over the Rabbitohs last weekend, defeating them 16-10 in front of 26,567 screaming fans.

Defence has been a key area of Canberra’s incredible 2019 campaign, an area that was on display in the recent victory over South Sydney. The Raiders finished the game with less possession (44%) than the Bunnies, yet managed to keep them to only two tries.

In the biggest game of the year, Ricky Stuart has named his strongest possible line-up, with Joey Leilua to take his place on Sunday night after suffering a lower leg injury.

Leilua: It felt like another heartbeat in my leg

The Roosters will be raring to go, after beating the Melbourne Storm 14-6 in last week’s other preliminary final. The side tore apart the Rabbitohs 30-6 in the first week of finals, earning themselves a week off before playing, and beating, the minor premiers for a Grand Final spot.

There will also be two milestones for the Green Machine this weekend, with Sia Soliola running out for his 200th NRL match while Joe Tapine will make his 100th NRL match too.

Last Time: The Roosters narrowly beat the Raiders 22-18 back in Round 21 at GIO Stadium. Sydney held on in a tight contest from start to finish, eventually winning by four points in what was Raiders’ co-captain Jarrod Croker’s 250th NRL match milestone.

White: We've got a job to do

Two of the competitions premier props will go head-to-head on the biggest stage, when Josh Papalii faces off against Jared Waerea-Hargraves.

Papalii has had an incredible season for the Raiders, with his efforts in the 2019 season seeing him win his second consecutive Meninga Medal, and third overall.

The Queensland representative has made 702 tackles and scored six tries, including last weekend’s game-sealing try against the Rabbitohs to cement the Raiders Grand Final spot.

The Roosters will welcome back Waerea-Hargraves from a one-week suspension, and he’ll be raring to go. The New Zealand International has completed 576 tackles this season, as well as scoring one try.

Entering his ninth season with the Roosters, Waerea-Hargraves will be playing in his fourth NRL Grand Final and will be hoping to clinch his third premiership with the Sydney side.

The NRL’s leading kick returners will be in full flight this Sunday night, as Charnze Nicoll-Klokstad comes up against James Tedesco.

Nicoll-Klokstad leads the count with a whopping 1,697 metres in his 25 appearances this year with Tedesco second with 1,475.

CNK has been a revelation in his first season wearing the lime green jersey, becoming an instant hit with the Raiders fans throughout 2019.

The Cook-Island international has gone over to score 11 tries this season and assist three, as well as making 4,315 total run metres over all.

Tedesco has been one of the Rooster’s star players, with the NSW representative scoring 17 tries and assisting 13 in the 2019 campaign.

Tedesco played all three games in the 2019 State of Origin this year, scoring the match winning try in the dying moments to seal the series for NSW. His efforts saw him win the Wally Lewis Medal for being the best player of the series.

With both players being enormous threats to oppositions, kicking games from both sets of halves will need to be stronger than ever to help reduce the impact that both Nicoll-Klokstad and Tedesco have on the game.

Another huge battle will be brewing in the forwards, as Raiders second-rower John Bateman will muscle it out with Roosters captain Boyd Cordner.

Bateman has been influential in his first season in the NRL, with the England international cementing himself as one of the Green Machine’s best in 2019.

Bateman arrived at the Raiders fresh off the back of a premiership winning season with Super League side Wigan Warriors, with his recent Grand Final winning experience a key influence for the Green Machine.

‘Aussie John’, as he’s been dubbed, has been a rock in the forward pack, making 770 tackles and notching up over 2,500 run metres. He’s also gone on to score five tries, including the game winning try against the Melbourne Storm in the first week of finals.

Cordner has had a massive 2019 season, leading NSW to their second State of Origin victory in a row, as well as leading his Rooster’s side from the front. Scoring seven tries and making 447, Cordner continues to lead from the front.

This will be the Kangaroos captain’s third time running out for the Grand Final, being in the Roosters side that won both the 2013 and 2018 finals.

Head to Head: The two Grand Finalists have faced off on 63 different occasions, with Canberra winning 28 of them compared to the Roosters 35. 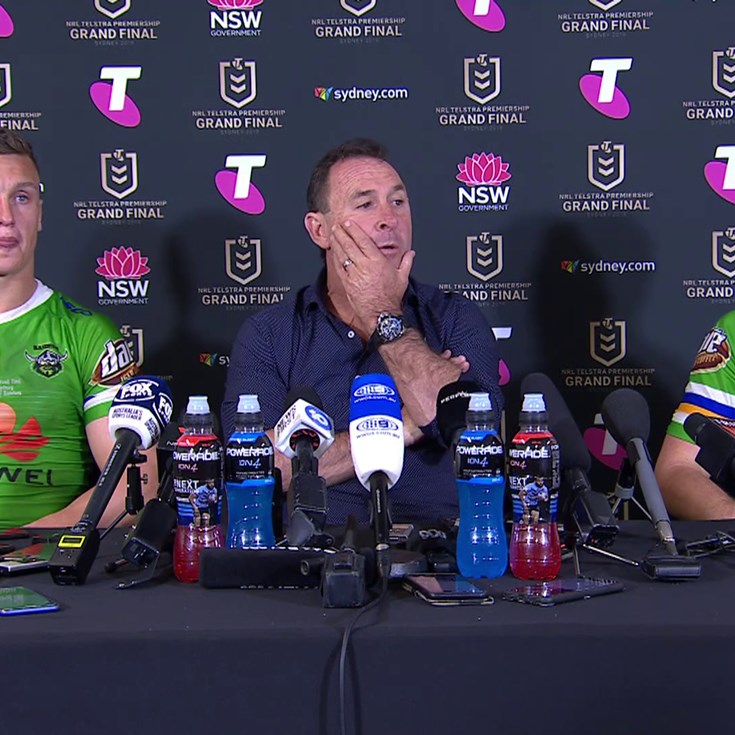