It was an emotional week for Kiwis debutant Charnze Nicoll-Klokstad and not even a loss to Australia could wipe away his pride after living out a childhood dream.

The rapidly-rising 24-year-old was a shining light in the 26-4 defeat at WIN Stadium on Friday night as he scored his country's only try and collected 112 metres despite playing an unfamiliar centre role.

After all the sacrifices, dedication and doubts before reaching the top, his mind was on his loved ones to start what turned out to be a bittersweet match.

"I could just picture everyone that's got me there. I could really picture my kids – they're the main drive for me," Nicoll-Klokstad told NRL.com.

"Just to be here, it's such a surreal feeling for me. I never thought I'd ever be here and to play with role models and heroes [of mine] growing up is crazy."

The Canberra Raiders dynamo couldn't keep himself together earlier in the week when told he would play his first Test for New Zealand.

"I just cried. I didn't think it would hit me like that. They said, 'We're just going to get you straight in for the Test, outside Benji [Marshall], inside Ken [Maumalo]' and I just started crying, man," he said.

Being on the same team as captain Benji Marshall and having former Kiwis legend Stacey Jones as an assistant coach made Nicoll-Klokstad's experience more special given he idolised the pair as a youngster.

"One of my goals when I started playing was just wanting to play alongside Benji," said Nicoll-Klokstad, who has also represented Cook Islands.

"Now I'm a fullback, it's the fullbacks [I look up to], but growing up it was Stace and Benji for me. To get that opportunity to run out with [Marshall] – dream ticked, man, dream ticked."

Nicoll-Klokstad hadn't played a first-grade game in the centres but the regular No.1's performance in the front-line was commended by coach Michael Maguire.

According to Nicoll-Klokstad, his time barking orders from fullback helped with the transition.

"The biggest thing was my chat - that’s a pretty big one to make sure you're connected with your team," Nicoll-Klokstad said.

"If there was any sort of skill that I was going to take into centre it was that. I thought I did alright.

"There were times I was blowing but I was managing to communicate to them to stay in the game. I loved it."

A first-half four-pointer was a nice memory to take away irrespective of the result.

"I wasn't too sure I got over until I looked across and saw the side-pole. I just got up cheering."

Nicoll-Klokstad gets a try on debut

The Kiwis kick off a two-Test series against Great Britain in Auckland on Saturday night and Maguire and Marshall are confident things will turn if they reduce their errors.

Nicoll-Klokstad agreed and said New Zealand had conceded "dumb" tries to the Kangaroos, including two from intercepts.

"I just really felt the pressure go off, we had them under the pump. We had them and we just didn't make it easy for ourselves," he said.

"We didn't get into the game. We just kept dropping ball and that's what happens." 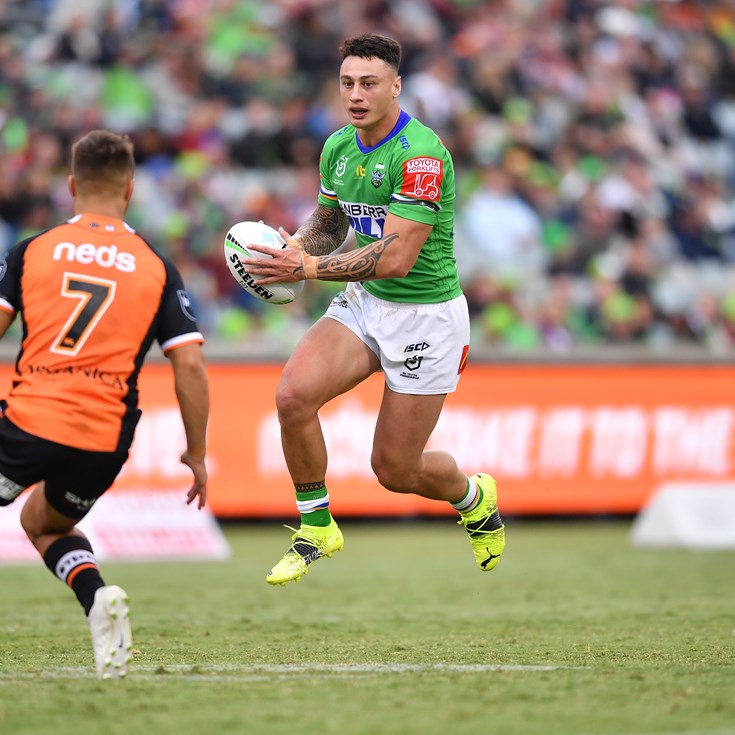 Nicoll-Klokstad gets a try on debut