The Canberra Raiders held on for a gutsy 18-12 against the South Sydney Rabbitohs as the two sides faced in each for the first time since the 2019 Preliminary Final.

Two early tries helped the Raiders on their way before the side managed to hold on despite losing Charnze Nicoll-Klkostad in the second half due to injury.

Nick Cotric opened the scoring when Jack Wighton’s cross-field kick was batted backwards by Rapana. Cotric - who played in the centres after being named on the wing - gathered the loose ball and produced a winger like finish in the left corner.

Another kick from Wighton provided another try for the Raiders. South Sydney playmaker Adam Reynolds managed to get a hand on Wighton’s kick towards the left wing but Croker responded fastest to score.

The Rabbitohs worked their way back into proceedings despite losing fullback Alex Johnston after a failed HIA.

After a period of pressure, Souths managed to score in the left corner courtesy of Dane Gagai. Two minutes later, the Rabibtohs took the lead as Jaydn Su’A managed to find Reynolds with an inside ball before the halfback scored under the posts.

The Raiders fought their way back into the game and looked to have hit the front just before the break when Elliott Whitehead crossed the line. However, the bunker disallowed the try due to an obstruction and the Rabbitohs went the sheds holding a 12-10 lead.

Croker levelled the scores early in the second half after Mark Nicholls gave away a penalty when he hit Jack Wighton late.

The Raiders were dealt a blow in the 50th minute when Charnze Nicoll-Klokstad had to leave the field due to injury. As a result, Rapana moved to fullback and local junior Harley Smith-Shield entered the fray for his NRL debut.

However, it was another new face who scored next for the Raiders as Semi Valemei opened his NRL account. The young winger managed to gather a deflected Elliott Whitehead kick. With rain falling, Croker slotted the sideline conversion to put the Raiders ahead by six.

Tom Burgess went close to scoring for the Rabbitohs but the prop lost control of the ball short of the line.

The Raiders were dealt another blow with nine minutes remaining as Rapana went off the field for an HIA causing another reshuffle at the back with Cotric going to fullback.

With a tense final few minutes of the game, the Raiders managed to hold on for a plucky win. 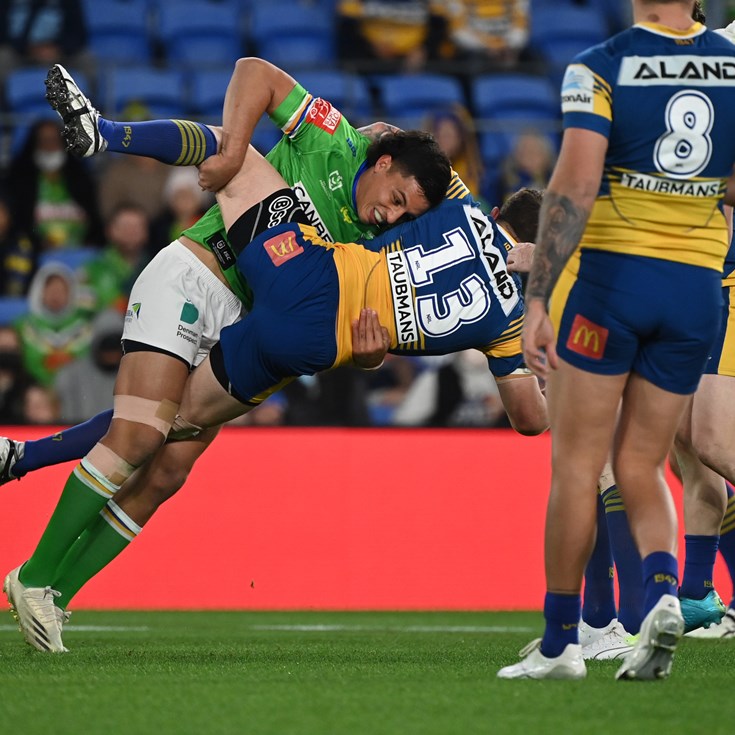 Raiders surge to victory against Cronulla

The opposition: Rabbitohs name side