The Canberra Raiders will set out to re-join the winner's circle on Saturday when they come up against the Brisbane Broncos at GIO Stadium at 7:35 pm.

The Green Machine will be looking to bounce back after a 28-12 loss against the Penrith Panthers last weekend at Panthers Stadium, despite their best efforts at a last-minute comeback.

Last week, the Raiders struggled to create opportunity against a strong defensive effort from the ladder leaders, something they’ll be looking to improve on this weekend. The Green Machine will aim to get on the front foot early in the game to avoid playing catch up.

While the Broncos started the season strong with wins against the Cowboys and the Rabbitohs in the opening two rounds, they’ve only managed to bag one win since the return of the competition, when they defeated the Bulldogs 26-8 back in round 9.

Ricky Stuart has named an unchanged squad heading into Saturday’s match, with Siliva Havili, expected to make a full recovery from a triceps injury sustained in last weekend’s game.

The Broncos will make the trip to the Capital without coach Anthony Seibold and playmaker prop, Tevita Pangai Junior as a result of breached COVID protocol, forcing changes to this weeks starting squad.

Ben Te'o joins the starting team to replace Pangai Jnr, Cory Paix joins the bench, and Isaac Luke drops from the interchange and into the reserves.

20-year-old Jordan Riki is set to make his NRL debut for the Broncos on Saturday, after being named in the interchange. The former Junior Kiwis Captain showcased his talent earlier in the year when he laced up the boots for the Maori All Star team.

The Broncos will have their work cut out for them if they're to secure their second win of the returned season, but the Raiders won't be underestimating them when they go to battle on Saturday.

The last time the Raiders went head-to-head with the Broncos was back in round 6 of the 2019 Telstra Premiership. The Raiders managed to break their five-year losing streak against the Broncos with a 26-22 win, in front of a home crowd at GIO stadium. 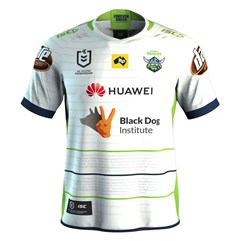 Although both men are in different stages of their careers, the two both bring depth and talent to their respective clubs.

Skipper Jarrod Croker continues to prove how lethal he is in the game. His ability to read the opposition and create opportunities for his side is why he’s one of the Raiders most valuable players.

On the other hand, is Kotoni Staggs. Since stepping on the scene in round 11 of the 2018 competition, he’s been quick to make a name for himself. This season, in his seven appearances he’s clocked up seven tries, 26 tackle breaks and seven linebreaks.

Staggs will be up against some tough competition when he faces Canberra veteran Croker, but Croker won’t be resting on his laurels against the young gun.

It’ll be an epic matchup when these two fiery players go head-to-head on Saturday. Raiders Nick Cotric will have to keep very close tabs on the 19-year-old Broncos centre if he’s to avoid Xavier Coates making getaway down the field.

Coates has recently claimed the title of fasted man in the league, clocking a lightning 36.9km/h and has proven he’s a danger on the field. In just nine appearances he’s crossed the try line on five occasions, made 22 tackle breaks, six line breaks and is averaging 122 metres a game.

Cotric has also proven he can be quite the handful. He currently ranks fifth in the NRL for tackle-breaks with a whopping 62 to his name. He’s also claimed eight line breaks, two try assists, six tries and is averaging 111 metres a game.

A standout game from either of these men could up the energy for their team to secure the win.

Josh Papalii and Payne Haas are arguably the toughest men in the league and undoubtedly two of the hardest to tackle.

Haas currently sits second in the competition for post-contact metres with a massive total of 1071 metres to his name while Josh Papalii trails with 782.

They're two of the hardest working players on the field, and it'll be a battle of strength and power come Saturday.

The pair have gone head-to-head 34 times since 1998 and the Broncos have dominated the stats, coming out on top 20 times and drawing once.

This season, the Raiders sit comfortably in the top 8 and are looking to be the stronger side heading into Saturday’s match.

Stuart: Young a really good guy to have around the club