The Raiders take on the Sydney Roosters for the second time in 2020 as the Eastern Suburbs outfit travel to the nation’s capital looking to exact revenge for the Raider's ambush earlier in Round 10.

The two sides have enjoyed a strong rivalry recently. Close encounters between the two sides followed by a grand final match has only strengthened the rivalry. The Raiders successfully got revenge for the 2019 decider when they caused an upset at the SCG in Round 10. Both sides will field vastly different sides compared to their previous encounter in what is expected to be the match of the round.

Never mind the rivalry, Saturday’s result could go a long way into determining who finishes in the top four in 2020. The two sides sit in fourth and fifth position on the NRL ladder on 22 points with the Roosters holding a better for and against. The winner of Saturday’s match will move into outright fourth position on the ladder. The Eels sit just above the two sides in third place with 24 points while the Rabbitohs are breathing down the neck on 20 points.

Papalii: We can't focus on SBW

Much of this weekend’s hype has come from the inclusion of Sonny Bill Williams into the Roosters side by coach Trent Robinson. Williams was part of the Roosters side which defeated the Manly Sea Eagles in the 2013 NRL Grand Final and has returned to the club after a stint in Rugby Union which was followed by a return to Rugby League with the Toronto Wolfpack. Williams is a global sports superstar and his inclusion will bring a lot of hype to the contest.

We’re past the three-quarter mark of the regular season and there are only four more matches until finals time. As mentioned above, the Raiders are looking to secure a spot in the top four. Saturday’s match will be the green machine’s second last home game of the regular season. No doubt Ricky Stuart’s troops will be aiming to find their true form heading into the business end of the season.

The Raiders will don the 2020 Foundation Jerseys. Established in 2019, the Raiders foundation ensures the ongoing success of the club driving growth both on and off the field. Over 165 Raiders supporters donated money to the club and the jersey displays each name on the design. The match-worn jerseys will be auctioned off through www.allbids.com.au post-match, with the money raised going towards the Raiders Foundation.

Due to the limited capacity for Saturday’s match, there have only been 3,000 tickets been made available. As it is a Canberra Raiders home game, 2020 Raiders members have had first access to tickets for the match. With tickets selling fast it’s a great reminder and incentive to become a Member of the Canberra Raiders in 2021. 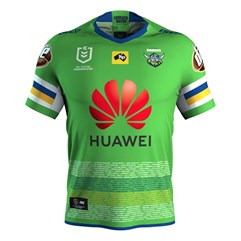 Stuart: Young a really good guy to have around the club

Cotric opens the scoring for the Raiders