As the only New South Welshman to win an Origin decider in Brisbane as both a player and a coach, Ricky Stuart is perfectly equipped to know what the Blues will face on Wednesday night.

History will be made on Wednesday night before the biggest sporting crowd since COVID-19 was declared a global pandemic as Brad Fittler attempts to join Phil Gould as the only NSW coach to win three consecutive Origin series.

If the Rabbitohs coach can lead Queensland to more glory in 2020 after back-to-back series defeats, the QRL may re-consider their policy of insisting the state’s Origin coach be a fulltime position.

South Sydney are unlikely to oppose him doing both jobs next season.

The Blues have won just two of 11 series deciders in Brisbane and are preparing for a hostile environment at Suncorp Stadium as there have only been 1987 tickets sold to people living in NSW and 760 in the Blatchy’s Blues supporter area.

However, he believes the success that Fittler and assistant coaches Craig Fitzgibbon and Danny Buderus have enjoyed in Brisbane as NSW players will benefit the Blues.

Fittler played alongside Stuart in the 1994 team that beat Queensland 27-12 in Origin III at Lang Park to secure a third consecutive Blues series win, while Buderus and Fitzgibbon played in the side he coached to a 32-10 win in the 2005 decider at Suncorp Stadium.

"Those guys have had their backs against the wall when the title was on the line," Stuart said. “They have that mental toughness and mindset that is required.”

Another key member of Stuart’s 2005 Blues team was fullback Anthony Minichiello, who also played in the 2011 series decider at Suncorp Stadium won 34-24 by the Maroons.

"In 2005 we really embraced going up there and doing it on their turf. We had a belief we could win," Minichiello said.

"You can get overawed playing at Suncorp but Freddy and his coaching staff have got so much experience and I’m sure they will be saying 'let’s go up there and take the trophy from them on their home ground. There’s nothing better'."

NSW forward Tyson Frizell said: "Origin is such a big occasion and games like this are massive for Queensland. For NSW, I guess you think about everyone down here watching us play up there. There’d be nothing better than giving back to NSW in front of Queensland at Suncorp".

With the Queensland border closed to people living in the Greater Sydney area, the streets of Brisbane won’t be packed with visiting NSW supporters and COVID restrictions are likely to mean that Caxton Street is quieter than usual on Origin night.

However, there will be up to 50,000 Maroons fans at Suncorp Stadium and QRL CEO Rob Moore believes the crowd will be a huge advantage for Bennett’s team.

"Normally a crowd at Suncorp is pretty parochial so there is usually a bit of a home town advantage anyway," Moore said.

"I think being the last game of the year, a decider and the opportunity to get into a full stadium people are obviously keen to be there."

Blues prop Payne Haas, who plays for the Broncos, also admitted the home crowd would be an advantage for the Maroons.

Focused on decider, Cleary won't 'get comfortable at all'

"If you know Queenslanders, they're really passionate and we’ll see it on Wednesday night," Haas said. "Broncos fans are so passionate and they still turn up this year even though we were going crap.

"It will be an advantage [for Queensland]. They'll lift after last week and be eager to put it over us early. It's up to us to ramp it up. The first 10 minutes are going to be pretty tough and we've got to come out with my energy."

Brace for an early onslaught

Stuart and Minichiello said the Blues would need to brace for a Queensland onslaught in the early exchanges but if they can withstand that should be able to become the third NSW team to win an Origin decider at Suncorp Stadium after the 1994 and 2005 teams.

"You have to go up there as a team and you need to believe in each other," Stuart said.

"You get found out if there is any doubt or any lack of confidence in each other or what you are doing. You are there on your own and that is where you really need that bond and you need that spirit.

"For us [in 2005], it was about showing that there was no fear and no disbelief. We felt very entitled to be there and very confident we could win.

"There have been times there when you haven’t got players to give you that feeling but I think that last game has shown there is a strong confidence among this group.

"Freddy creates that in his own personality. He is a great team person and I could only imagine how he has pulled these blokes together to rally around that little bit of belief and confidence within each other."

Minichiello said the Blues had to survive a lengthy period of defending their own line in the opening minutes of the 2005 deciders before going on to win comfortably.

"The feeling up there is that Suncorp is where Origin is played all the time and it is going to be a full house so the Queensland players are going to be pumped," Minichiello said.

Cleary's man-of-the-match performance by the numbers

"But how long does that feeling last for if we execute our game plan right. That is what Freddy and the boys would be talking to the team about.

"If Nathan Cleary is kicking like he did last week it is going to be a game and I really think we are a better side so if we execute right we should win."

The implications for Freddie and Wayne

Fittler is signed for next season and if the Blues triumph on Wednesday night he will be aiming to become the first NSW coach to win four consecutive series next year.

Bennett is enjoying his fourth stint as Queensland coach and he is aiming for his sixth win in eight series since 1986 after taking on the job at short notice following the resignation of Kevin Walters after his appointment as Brisbane coach.

The QRL are yet to decide who will be in charge of Origin next season but former Cowboys premiership-winning mentor Paul Green appears the most likely option unless there is a change of policy to enable an NRL coach to also do the Maroons job.

"That is one of the things that is being floated at the moment," Moore said.

"We have already got a review of our programs which is due to drop at the end of January. That wasn’t necessarily looking at the coach but during the interim we will start to look at the process for the coaching appointment.

"Considering the changes that had to be made just before the series started, with Kevvy and the Broncos position, the players being in quarantine the whole time and having to fly in and fly out to Adelaide and Sydney, it hasn’t been an easy camp.

"Wayne has got an unbelievable record and when we sat down and looked at our options that was part of the reason we went with Wayne."

The Rabbitohs board have not discussed whether they would allow Bennett to coach Queensland again next year if Origin returned to mid-season but with assistant Jason Demetriou taking over at Redfern in 2022 it is likely that the club would support the move. 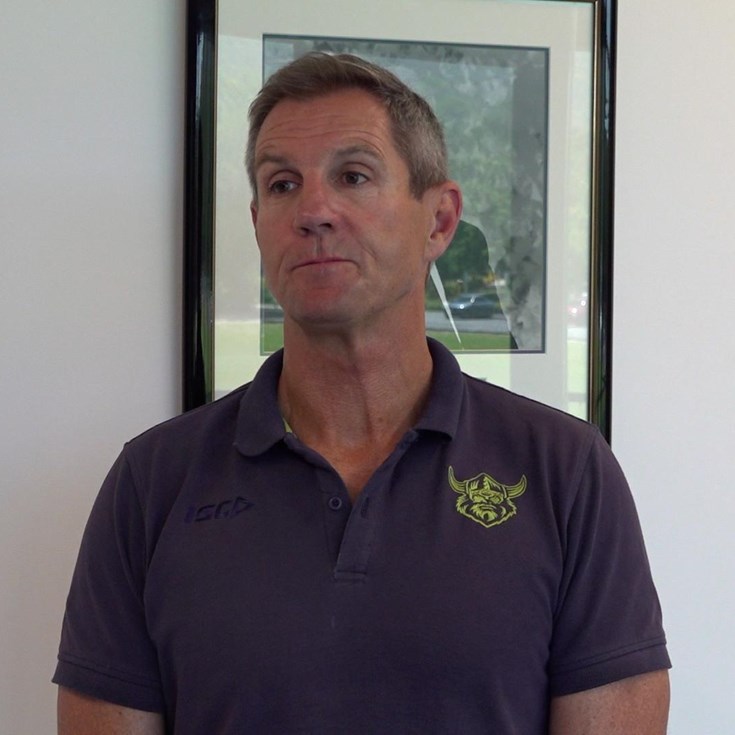 Raiders to return to Wagga Wagga in 2021