This time we’re taking a look at the hookers.

Josh Hodgson was in fine form during the opening stages of the 2020 season. The captain racked up try assists in the opening two rounds before playing a significant role in helping the Raiders defeat eventual premiers, the Melbourne Storm.

However, in the reverse fixture, the captain suffered a season ending injury.

As a result, Siliva Havili and Tom Starling stepped up to the plate in style.

Havili, who originally came to the Raiders to play hooker when Hodgson suffered his first ACL injury, had been consistently in the side but playing more as a lock with short spells in games at dummy half.

Starling came into the side having not played competitively since NSW Cup was cancelled in March but didn’t miss a beat.

For the opening weeks of the split roles, Havili started matches before Starling joined the fray midway through the first half to play out the rest of the game. Havili would subsequently have a second stint at lock.

As Starling grew into the role, Ricky Stuart chopped and changed who would start and who would come off the bench depending on the fixture.

The partnership proved to be effective as the Raiders won 11 of the 14 remaining fixtures of the 2020 season.

After a two month halt in the competition, Josh Hodgson returned to the field like he hadn’t been away.

The Raiders travelled to Melbourne hoping to claim three consecutive wins at AAMI Park and managed to do so thanks to a mammoth performance from the captain.

The Englishman combined well with both Jack Wighton and George Williams as he sent the defensive line retreating with some smart runs without overplaying his hand.

The Raiders scored their first three tries of the evening in this manner.

In the second half, the Melbourne Storm had plenty of possession but Hodgson’s workrate was important as the hooker led the team’s tackle count with 38.

With Melbourne finishing strongly, Hodgson came up with two clutch plays to seal the win. A one-on-one strip on Jesse Bromwich and a 40/20.

In the aftermath of Josh Hodgson being ruled out due to a season ending ACL injury, Ricky Stuart publicly backed little known hooker Tom Starling.

The following match Starling was on the bench sharing the hooker duties with Siliva Havili and the pair produced stellar performances to seal a memorable win against the Roosters in what was the first time the two sides had met since the 2019 Grand Final.

With a different style of attack, Havili and Starling gave both halves plenty of early ball but the clutch play came late in the second half as Tom Starling put Josh Papalii through the Roosters to defence to score the match winning try.

Havili got through a mountain of work in his 48 minutes as he topped the tackle count for the Raiders with 34. Starling wasn’t far behind with 31 tackles which included a big hit on Taukeiaho.

Tom Starling was involved in everything during this match after a late switch saw the rookie start the match instead of Siliva Havili.

After a tight opening 25 minutes, Starling scored his first of the evening. The hooker was in the right place at the right time as the Raiders pounced on a mistake from Will Hopoate.

In the second half, Starling managed to accrue an unwanted career first. The hooker was sent to the sin bin after the Raiders gave away three consecutive penalties.

With Starling off the field, Havili came onto the field and gave Jack Wighton plenty of early ball as he scored a quickfire double.

Starling returned from the bin in style as he scored the last try of the game. The hooker darted from dummy half about 10 meters out to score. The try brought up a more positive career first – a first career double. 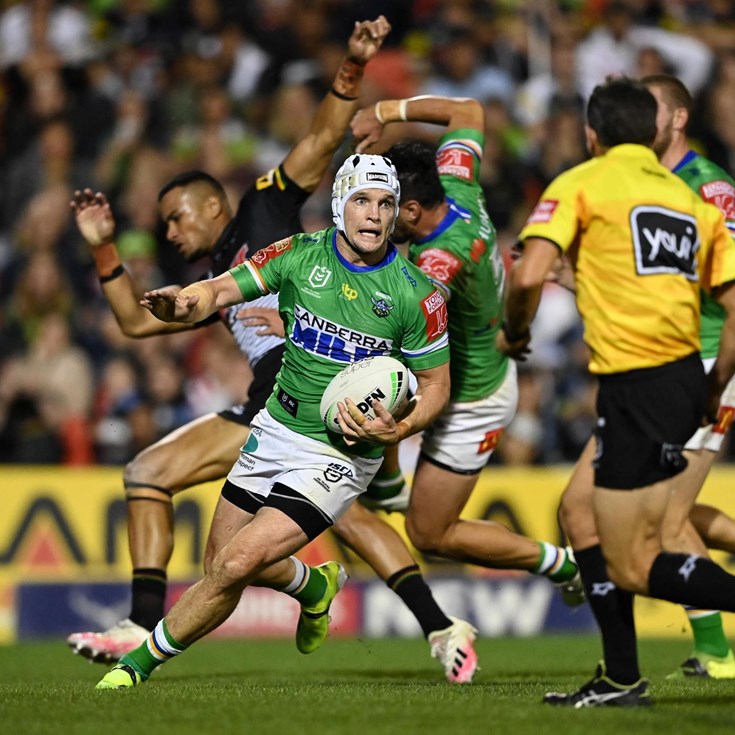 2021 Best Moments: Whitehead finishes off a brilliant piece of play