Roger Tuivasa-Sheck may have denied his side what would have ranked among their all-time greatest wins but Raiders captain Jarrod Croker still left GIO Stadium in a buoyant mood on Saturday.

After Rapana took to the air in a bid to secure the two competition points, Croker's face turning from ecstasy to despair once what had transpired sunk in.

With only one healthy interchange player for almost 70 minutes of the game, the Raiders had held on grimly for much of the second half as New Zealand chanced their arm with second-phase play.

"It’s tough to swallow but you look on the flip side, it’s round three," Croker said.

"The effort we put in, you look over at the bench after 15 minutes and Starlo’s [Tom Starling] the only player there so it’s a massive effort."

Canberra coach Ricky Stuart regularly trains his side to prepare for the contingency of only having 12 on the field, but being down to one fit interchange player for the last hour of a match was something new.

Croker suffered a dislocated finger and Scott suffered a suspected fracture to a rib early in the game.

Defy Impossible: RTS serves up a match-saving tackle of his own

"He did it at the start of the game and I’d like to say I learned something about him, but I knew he was mad anyway," Croker said of Scott.

"That was as courageous effort as I have seen from Scotty, they couldn’t even give him any pain killers so that’s the sort of effort that makes you proud of the green jersey and I hope everybody realises how much pain he was in because efforts like that are what the green jersey is all about."

Ryan Sutton stepped up again for Canberra when they needed him, with the 25-year-old running for 188 metres off 21 hit-ups making 51 tackles and a linebreak.

"It says a bit about our depth that Sutto wasn’t playing in round one but he’s been one of our best the last two weeks," Croker said.

"His effort today, I remember trying to give him a pat on the back out there in a break but he was like 'I’m right, I’m right, I’m ready to go' so the effort level of guys like him and the other middles who played big minutes was massive."

Hodgson plays flat across to Soliola

The Englishman said the second and third efforts Canberra’s defence had to make as the Warriors attack clicked into gear in the second half sapped their energy.

"It’s the toughest thing to try and defend when somebody is just chucking the ball around like that," Sutton said. 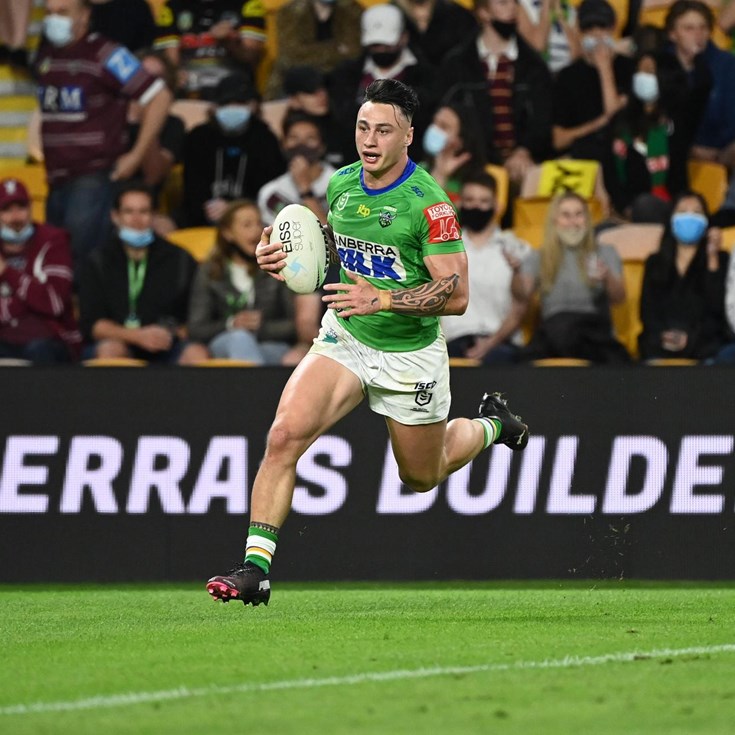