Some thrilling games in round three, with Gungahlin Bulls and Queanbeyan Blues remaining undefeated while the Queanbeyan Roos picked up their first win of the season.

The Yass Magpies pulled off a thrilling victory over the Tuggeranong Bushrangers, scoring in the final play of the game at Walker Park.

The Bushrangers lead 40-32 with five minutes to go, but a try to Yass prop Manu Vanisi closed the gap to 40-36. Cooper Harris then scored in the final play off a Josh Fattore kick, with Shaun Davis kicking the conversion to seal the win.

The match was a see-sawing affair, with the lead changing multiple times. Yass jumped to an early 16-6 lead, before Tuggeranong fought back, with tries to Keaton Walkington-Meads, Oscar Schmidt and Julian Haywood-Whiley putting the visiting side ahead 22-16 at half-time.

The tight tussle for the lead continued in the second half, with both teams fighting back at different stages.

Yass winger Bruce Barrie finished the day with four tries, while Bushrangers' Mariota, Schmidt and Haywood-Whiley all finished with doubles.

The Queanbeyan Roos notched up their first win of the season with a 26-12 victory over the Woden Valley Rams at Phillip Oval.

With the score locked at 6-6 at half-time, the Roos came out firing after the break, piling on four unanswered tries.

The Roos were first on the scoreboard, with winger Temple Rupapera crossing the line. The Rams hit back just before half-time through Lachlan Eveston.

Queanbeyan halfback Sione Vuki scored right after half-time, giving his side a 10-6 lead.

The Roos continued their momentum, with lock Jesse Dent, Rupapera and Kaine Pagura all scoring to put the visitors ahead 26-6.

The Gungahlin Bulls pulled off a miraculous try in the final minute to claim a two-point victory over West Belconnen Warriors at Gungahlin Enclosed Oval.

The Bulls were down 30-28 with a minute to go before scoring the try of the competition thus far. Travelling 70 metres, going through six pairs of hands, and with a spectacular sommersault by fullback Tristan Eldridge, Tre Holten-Williams scored the try at the end to claim victory.

Gungahlin were ahead 22-6 at half-time, before West Belconnen made a comeback, scoring three tries to hit the lead 26-24 with eleven minutes to go.

Holten-Williams hit back for the home side, putting Gungahlin in front 28-26, before Warriors centre Kane Rushton burst through the defence to score a try, regaining a two point lead before Gungahlin scored the match winner.

The Queanbeyan Blues kept their winning streak alive with a hard-fought win over the Goulburn City Bulldogs at Seiffert Oval.

Goulburn lead for most of the game, and were ahead 20-18 with fifteen minutes to go before tries to Charlie Woolford, Joshua Baker, Cyprian Ale and Atunaisa Tupou blew out the score for the Blues.

Richard Holani opened the scoring for the Blues, crossing the tryline in the fifth minute. Goulburn hit back through winger Steven Cummins, levelling the score at 6-6.

A penalty goal put the Bulldogs ahead 8-6, before Blues fullback Mathew Parsons scored under the posts. Matt Sherer and Dominic Stephens both hit back for Goulburn, putting their side ahead 20-12. 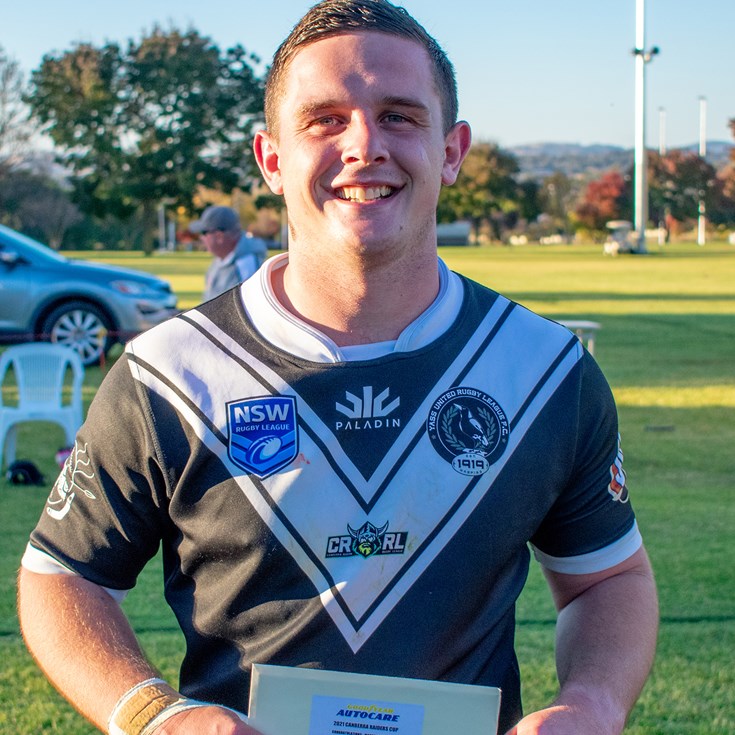 Man of the Match: Round Three