The Woden Valley Rams and Goulburn City Bulldogs feature in the match of the week in round seven of the Canberra Raiders Cup.

The Rams will look to bounce back after a disappointing loss to the Yass Magpies last weekend, as they host the Bulldogs in  the match of the round.

Goulburn picked up their third-straight defeat last weekend as they went down 22-16 to the Belconnen United Sharks. The Bulldogs will travel to Woden to try and turn things around in what will be a pivotal game for the visitors.

The Bulldogs will look to experienced captain Tyson Greenwood for guidance and leadership to break the streak of losses this weekend. Greenwood believes the Goulburn side aren’t far away from returning to the winner’s circle.

“Yeah obviously we went two from two to start the season then unfortunately we had a few losses. I think we just need to put a good 80 minutes together and we will be rewarded with a win", Greenwood said

Greenwood also spoke on his new role of Captain-Coach at the club and the challenges of creating a winning environment.

“It’s definitely different. There’s a lot more pressure and a different environment too. But, I’m definitely liking it and Jesse [Martin] is making it a bit easier. They’re also a legend bunch of boys so it’s easy to coach.”

Rams captain Steven Ferry highlighted the intensity of this weekend’s clash and the importance of getting the much-needed win.

“It’s definitely a big game for us. We’ve dropped a few too many games in a row so it’s really important that we get back on the right track this weekend with the win,” Ferry said

Ferry also touched on what his Woden Valley side can expect from Goulburn this weekend and spoke on his previous experiences against the club.

“[We’re expecting] a tough brand of footy. You always come up battered and bruised. It’s just a tough game so we just need to focus on ourselves.”

The West Belconnen Warriors will host the Queanbeyan Blues this weekend as they try to clinch back to back wins over both Queanbeyan sides in the Canberra Raiders Cup.

The Warriors hung on to defeat the Queanbeyan Roos 30-28 at Seears Workwear Oval last weekend.

The Blues were handed their first loss of the season to the Gungahlin Bulls 40-20, with both sides previously undefeated heading into last weekend’s match of the round. The Bulls now stand alone on top of the ladder and the Blues will be chasing revenge this weekend when they travel to West Belconnen.

Warrior’s backrower Joshua Ayers will look to continue his outstanding form as he currently sits second on the Best and Fairest scoreboard on eight points.

The Bushrangers will feel refreshed after the bye and they will need to be on their game this weekend when they face the undefeated Gunghalin Bulls on Saturday.

Tuggeranong had a 30-24 victory over the Belconnen United Sharks in round five and will be well rested to take on a juggernaut Gungahlin side this weekend.

The Bulls had an astonishing 40-20 victory in round six to defeat a previously undefeated Queanbeyan Blues side and will look to back it up again this weekend against the Bushrangers.

Gungahlin captain Tre Holten-Williams leads the way on the Best and Fairest leader-board on ten points.

The Sharks will host the Yass Magpies this Saturday as they look for back to back wins in the Canberra Raiders Cup.

The Sharks got their first win of the season last weekend, defeating the Goulburn City Bulldogs 22-16 at home.

Sharks five-eighth Matthew Woolnough led the way as he guided his team in a huge win for the club to kickstart their season.

The Magpies also racked up a huge win, defeating the Rams 38-12 in Yass and  they will travel to Bruce this weekend to cement their spot in the top four of the competition. 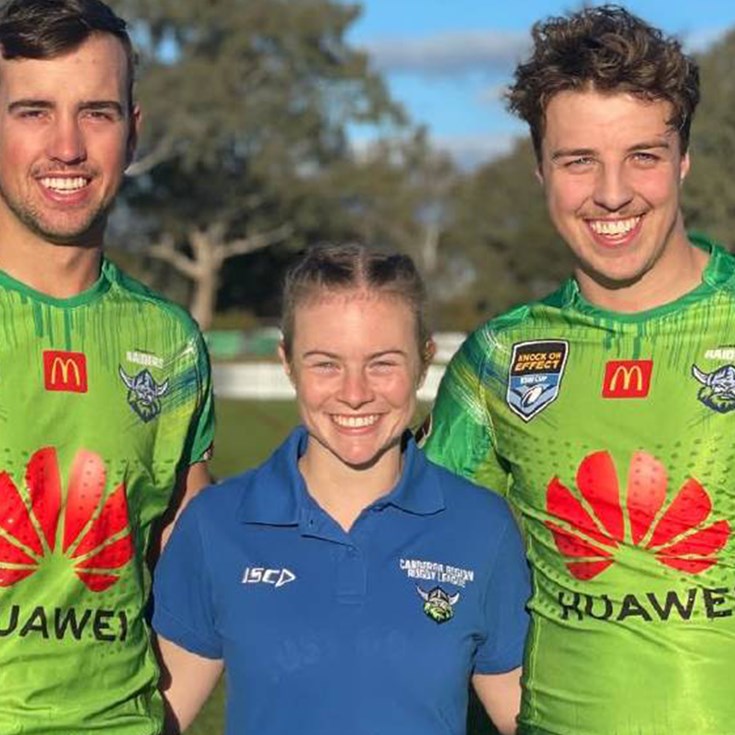