Freshly re-signed rookie Raiders winger Xavier Savage can afford to laugh about his whirlwind 11-minute debut that landed his club a $5,000 fine and hopes to get a more legitimate debut in the near future.

Some half-time confusion following Seb Kris's inability to return to the field against the Dragons last round saw 18th man Savage hurriedly rushed onto the field for his debut, only to be substituted 11 minutes later when it became clear he was not eligible to be activated because the foul play from Jack Bird that ruled out Kris was only placed on report rather than Bird being sin-binned.

Although it was an honest error the club was still handed a $5,000 breach by the NRL, which Savage laughed he would leave for Stuart to pay – though the coach was apologetic after the match.

"Everyone makes mistakes, stuff happens, there's nothing we can do about it now, we can't go back and change it," Savage said.

"I was happy I still got a taste of it. I'm working towards the next job now and hopefully I get a legal debut!

"I knew something like that would happen to me, something crazy like that always happens to me. I was still very happy. I got a taste of NRL and it just makes me even hungrier for what's to come over the next two years. Hopefully I get another opportunity soon and I'll make sure I do my job out there when I do."

Stuart also made sure the 19-year-old didn't let the controversy get to him.

"He's been reminding me I'm here for a reason and that's been a big thing for me not feeling like I'm not at the level these other boys are," Savage said.

"If I start acting like a professional the quicker I get to where I want to be.

"He said that's why he gave me that 18th man spot, because I've been working hard and competing for that spot. He knows I can do the job. He said to not let it get into my head and I've been really good with that, always asking questions as well. I've still got a lot to learn."

The recent two-year extension was a big reward for Savage's strong work this year from pre-season through his Knock-on Effect NSW Cup appearances.

"I'm very excited for the next two years, it's such a great club. I'm glad I've chosen to stay here and I know I won't regret my decision," he said.

"Pre-season had to be a big one for me. The whole mental toughness side of it and physically obviously coming into the big boys game, it was very different coming from high school footy to train with the NRL boys. It helped me get out of my shell and back my ability."

The other big contract news out of the nation's capital this week was a three-year extension for impressive centre Seb Kris, who was not the top 30 at the end of last year and not in a strongest 17 to start this one yet has played all but one NRL game this season.

Whitehead steps through the line to set up Kris

"I'm very excited. It's something I've been working towards the whole of pre-season and up until this point," Kris said.

"Firstly I was grateful for the opportunity to come back in even just as a train and trial contract and I'm grateful for where I am now."

The representative weekend gave Kris a chance to recover from the head knock and eye injury that caused the Savage 18th-man dramas.

"I'd say it took me three or four days to fully recover," Kris said.

"I had a scratch just under my eyelid which was irritating me quite a lot but I did what I needed to do and recovered well.

"We got topped up in fitness which isn't always fun but it was good to not have to miss out on a game because of my eye." 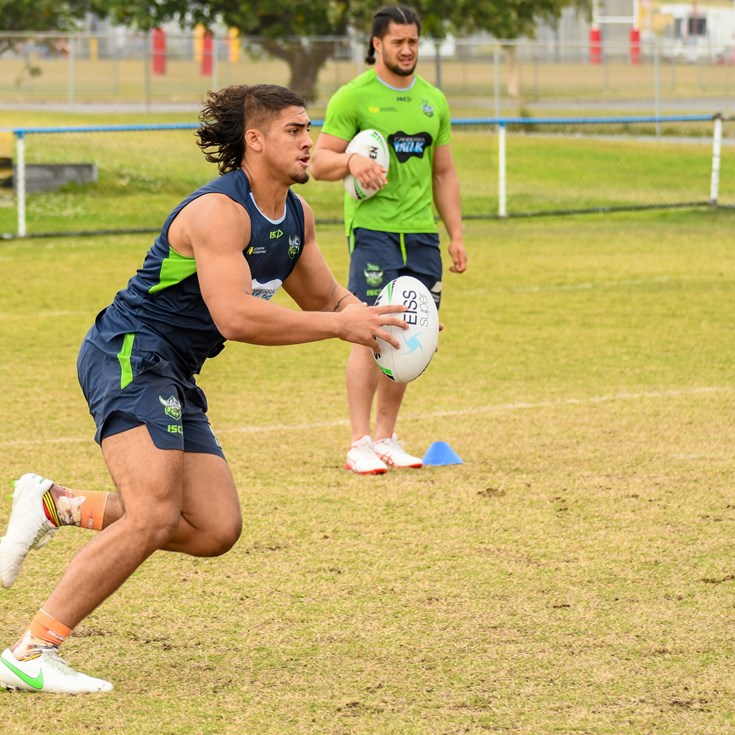