The Queanbeyan Kangaroos and West Belconnen Warriors maintain their place in the top four after an exciting round 14 in the Blumers Lawyers Canberra Raiders Cup.

The Yass Magpies snapped a five game losing streak with a strong win over the Tuggeranong Bushrangers at Greenway Oval.

Yass fullback Nofoaiga Limoni and hooker Mitchell Turner both scored doubles in the victory, which sees the Magpies finish the round in seventh place.

The Magpies got out to a great start, leading 12-0 after 16 minutes of play after tries to Turner and Jayden Clarkson.

Tuggeranong hit back ten minutes later through centre Brigham Moeakiola, with the half-time score at 12-4.

The Bushrangers were the first the score in the second half, with Joshua Billing swooping on a kick and going over the try-line, closing the gap to 12-10.

But from there it was all Yass, with the visitors running in four straight tries.

A big second half performance by the Queanbeyan Kangaroos sealed their win over the Woden Valley Rams at Seears Workwear Oval on Saturday.

The Roos scored five consecutive tries in the final 40 minutes to ensure victory, which sees them finish the round in third place on the ladder.

It was a see-sawing first half of footy, with both sides exchanging try for try early on. The Roos then jumped ahead 18-10 before Woden winger Lachlan Eveston and fullback Albert Hopoate both scored for the visitors, putting the Rams ahead 20-18. The Roos scored just before half-time through Reece Robinson, with the half-time score at 22-20.

Queanbeyan came out firing in the second half, their attack looking seamless as they piled on five tries. Reece Robinson scored a hat-trick for the Roos, with Lachlan Ingram kicking eight from nine conversions.

The Gungahlin Bulls turned around an eight point deficit at half-time to claim a 24-16 win over the West Belconnen Warriors at Greenway Oval.

It was an important win for the Gungahlin side, who remain outright first on the ladder.

The Bulls were first on the scoreboard, with Jack Williams bursting through the Warriors' defence to score. West Belconnen hit back, with a try to Kane Rushton, before a great individual try to Bulls halfback Connor Williams put his side ahead 8-4.

The Warriors then scored two straight tries, with Darby Medlyn and Josh Ayers both forcing their way over for a try each. The half-time score was 16-8 at half-time.

But just like they've done all season, the Bulls attack clicked into gear and it was Bulls fullback Tristan Eldridge who scored first in the second half. Gungahlin winger Rourke O'Sullivan scored a double to seal the win for the side.

The Queanbeyan Blues made it five wins in a row after a 40 point victory over the Goulburn City Bulldogs on Sunday.

The Blues put in a dominant performance across the park, running in nine tries while holding the Bulldogs to just ten points.

Fullback Matthew Parsons scored four tries in the game, and is now on 20 tries so far this season.

Goulburn were first on the scoreboard after Steven Cummins scored near the sideline after a great pass by halfback Joe Roberts. Issac Walker converted to give his side an early 6-0 lead.

But the Blues were able to hit back through their halfback Blake Murray, who found some space right near the try-line and went over for a four-pointer. The Blues then scored three quick tries to go ahead 22-6 at the half-time break.

It took just 40 seconds for the Blues to score in the second half, with Parsons going over for a four-pointer after a strong carry by Josh Baker and pass by Murray.

Goulburn winger Cummins scored his second try of the day, but the Blues were relentless as they finished the game with 50 points.

They remain in second place, just one point behind the Gungahlin Bulls. 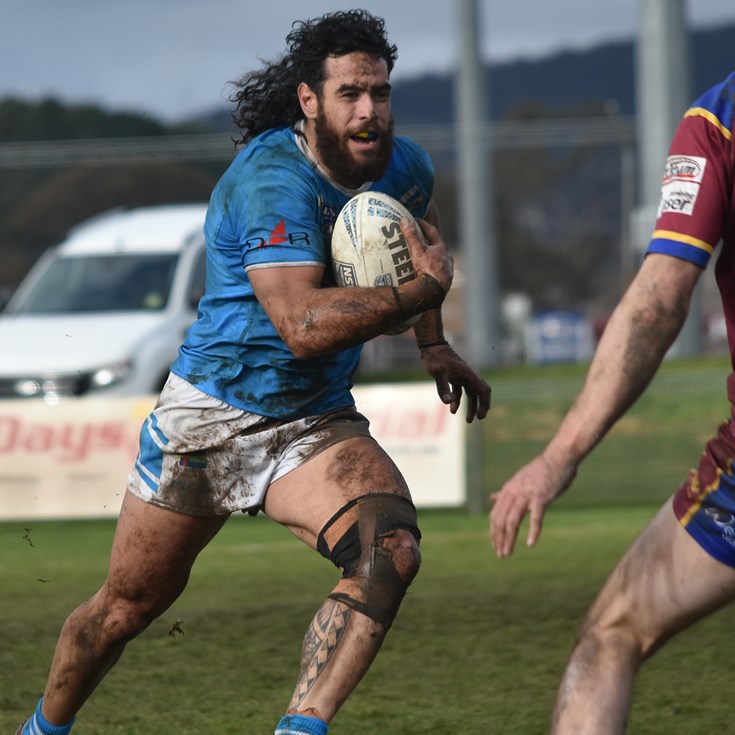