The Raiders will face the Cowboys for the 38th time in NRL history on Saturday. A number of contests between the two sides have gone right down to the wire, none more so than the following 10. These are the 10 closest by margin.

In the second of five games between the Raiders and Cowboys to have been decided by six points, the Cowboys escaped 34-28 winners to halt the hosts’ push for the finals. Canberra finished fourth in 2003 and North Queensland 11th, but the Cowboys rained on the Raiders’ home parade despite their disappointing season and despite the fact that winger Joel Monaghan scored a double.

In the middle of a three-game winning streak of the Raiders’ over the Cowboys across 2004-05, Canberra secured a 32-28 victory in an entertaining affair in the nation’s capital. Raiders winger Nathan Smith bagged a double in a game in which the Raiders led 20-8 at half-time before extinguishing the flames of a lightning-quick Cowboys finish.

In a bizarre encounter that would tickle David Middleton’s fancy, four players scored a double each as the Cowboys snuck home four-point winners in a heart-stopper. The Raiders’ Terry Campese and Marshall Chalk and the Cowboys’ Matthew Bowen and cousin Brenton Bowen all scored a pair of tries each as Graham Murray’s men staved off a fast-finishing Raiders outfit. The Cowboys led 22-14 at the break, before Canberra launched a gallant surge in the second term.

When the Raiders last locked horns with the Cowboys, it was Paul Green’s men who pinched a golden-point victory in Round 1 of this season. Joey Leilua crossed in the shadows of full-time and Aidan Sezer converted to lock things up at 16-apiece, before Cowboys forward Gavin Cooper scored a try three minutes in to extra-time as the Raiders’ 2017 campaign got off to a heartbreaking start.

In the only game between the Raiders and Cowboys to have ever been decided by three points, the Cowboys pocketed a 31-28 victory to snap a three-game losing streak against the Green Machine. The Raiders led 14-12 at the break before the Queenslanders scraped home in a high-scoring second stanza.

The Raiders notched a half-century of points against the Cowboys in Round 10 of 1998, but it was the Cowboys who took the chocolates in Round 4 in a low-scoring affair that the hosts claimed 14-12.

In the first of four games between the Raiders and Cowboys to have been decided by a solitary point, it was rugby league journeyman Brad Drew who slotted the match-winner. It came off the back of a second-half surge by the men in green after they had trailed 12-6 at half-time, the former Panthers and Eels playmaker springing up from dummy-half to plant the field goal four minutes out from full-time.

It was on the final Saturday of June in 2005 that the Raiders came face-to-face for the first time with a 22-year-old star-in-the-making by the name of Johnathan Thurston, a former Bulldog who would become the player of his generation. Alas, it was another playmaker in Raiders five-eighth and future Cowboys player Jason Smith who would boot the match-winning field goal and in so doing put to bed a full-throttle Cowboys finish. The Green Machine led 22-12 at half-time, before the visitors put on the afterburners to square things up at 22-apiece.

The Raiders travelled north of the Tweed and left with their third one-point victory over the Cowboys in head-to-head history. Former Raiders pivot Todd Carney snagged a field goal in the second period of extra-time as the men in green clinched victory in a thriller. The Raiders led 12-8 at the half-time break, before the Cowboys fought back in the second half to set up a dramatic finish eventually iced by Carney’s right boot.

Of the four games between the Raiders and Cowboys to have been decided by a solitary point, this fixture is the most recent. It was a clutch Johnathan Thurston field goal on the stroke of the full-time siren that sealed the game for the Queensland outfit and put a legion of Cowboys fans in raptures. The visitors cut it mightily fine, Rory Kostjasyn throwing JT the ball from dummy-half with the clock reading 79:59 before Thurston’s right boot sunk the hearts of the Raiders faithful.

Be there when the Raiders engage in what promises to be another absolute blockbuster with the Cowboys at GIO Stadium on Saturday night. 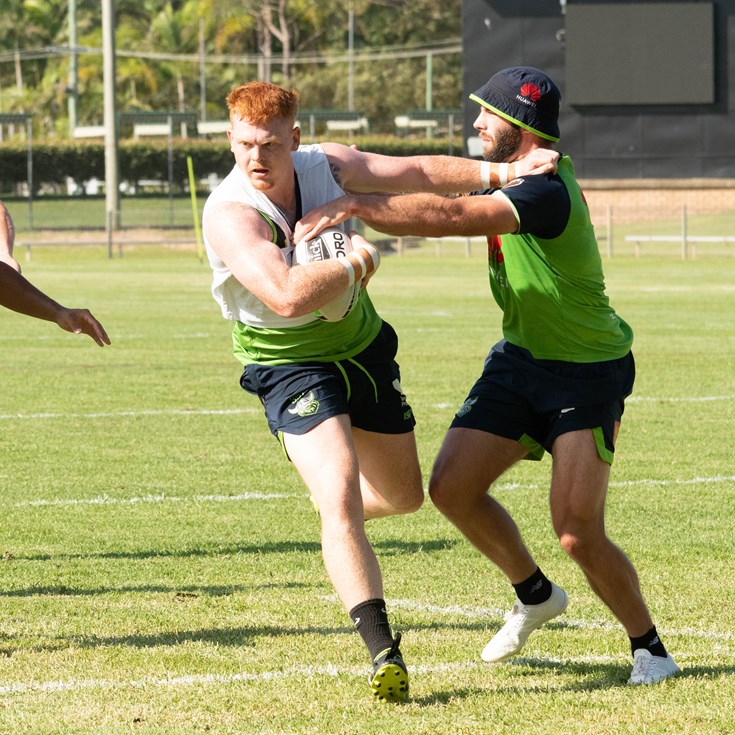 On the road with Corey Horsburgh